How do I deal with an infinitive verb in a syntax tree?

The sentence in question is "Chomsky innocently asked Baker to comment on the changes to the theory during the lecture." I'm unsure of how to handle the "to" in "to comment." I asked my TA and she said it would not be a tense.

Here is my currently incorrect tree: 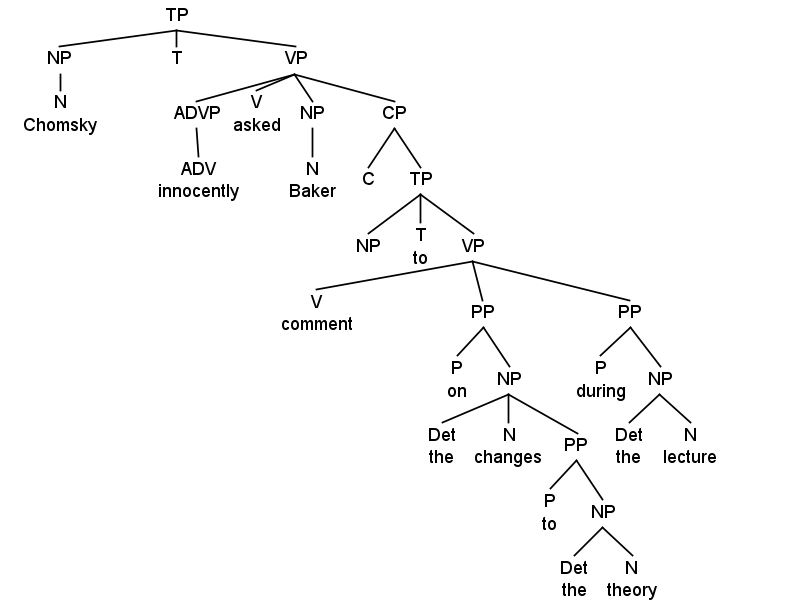 I know that I'm going to have to change it to have it correct, but I'm unsure now if "to comment" just falls under the verb or if it has to be split up.

Since you treat the 'sentence' (the 'predication' component of a clause, rather) as a TP, I assume you are broadly subscribing a late version of the Chomskian P&P theory of syntax, and, if so, there are multiple reasons why your tree is completely unacceptable, but I would not say the way you have represented the infinitive is a particularly important one. In that respect, if anything, your Chomskian syntax teacher could, perhaps, object that the lower 'T' should be 'Infl', rather than 'T', or 'T' but specified as [-Tense, -AGR], in opposition to the higher 'T', which should be marked as [+Tense, +AGR], but that's about it. That is not a serious defect, as far as I can see.

What is really wrong with your tree is that it reflects a strange hybrid theory in which a couple of Chomskian assumptions (the existence of the functional categories T and C as heads of the 'predication' and the 'clause', respectively) coexist with an otherwise traditional 'flat' early phrase structure-style account of everything else. That's why, no matter how you represent the infinitival element, there is no way to reconcile your tree with the late version of P&P Theory you seem to intend it to conform to.

I suppose you know that when Chomskian syntacticians like Pollock (and Chomsky himself) started analysing finite predications as TPs (around 1989), they continued to assume most of the results obtained within P&PT in the immediately preceding period, in particular a) Kayne's 'binary branching' hypothesis (1984)[which is incompatible with your analysis of the two TPs, the two VPs and the NP]; b) the three-tiered X-bar theory of Chomsky's Barriers (1986) [which clashes with the analysis your tree offers for absolutely all the phrasal categories involved]; c) Larson's 'shell' analysis (1988) [which is necessary to maintain Kayne's 'binary branching' hypothesis, but incompatible with Baker and the CP, or the two higher PPs in your tree being sisters]; d) the 'VP-Internal Subject Hypothesis' (1986-1988) [according to which Chomsky should initially be in the specifier of asked, a position you do not provide, as you generally fail to acknowledge specifiers]; e) Abney's (1987) 'DP Hypothesis' [which clashes with your NP label and your flat analysis of the 'NP' the changes to the theory]; and f) a highly elaborate view of the way arguments and adjuncts must be 'projected' and 'attached' in Comp X and Spec XP (or Adjunct X') [which is incompatible with your treating innocently as a sister of asked, Baker and the CP, and with the PP during the lecture being a sister of the verb comment and the PP on the changes to the theory]. Etc. Etc.

In short, no matter what aspect of your tree above is considered, it is hopelessly wrong for the theory of syntax you seem to want to work within, i.e., late P&P syntax (to judge from your use of 'TP'). Whether the infinitival inflection should be labelled 'I' or 'T'[-Tense, -AGR] is, in comparison, a very minor defect you need not worry about.

Not the answer you're looking for? Browse other questions tagged syntax syntax-trees infinitive or ask your own question.

4
Syntax: How can this tree be built?
4
Infinitive verbs in syntax tree
1
References and sources to help me explain the semantics of the word 'over'
1
How are to-infinitive clauses treated in x-bar syntax trees?
5
How do you draw a syntax tree for a sentence with a dummy subject?
1
Syntax tree for “the Middle East”