Interrogatives and Copulas in Malay

In Malay, the wh-phrase in interrogatives remains in-situ, but may move to the left periphery of the clause.

The use of in-situ wh-phrases is characteristic of conversational everyday Malay, whereas preposed wh-phrase constructions are used in more formal registers. It doesn't seem to me that the prepositioning of the wh-phrase is due to topicalisation or focus movement.

When the wh-phrase is preposed, the interrogative corresponds to a pseudocleft in English, e.g. "what was it that you ate?". The noun that the relative clause modifies is dropped.

Is this pseudoclefting transformation without the intention of putting the wh-phrase into focus common in other languages?

(The next question is based on the following tree diagrams) 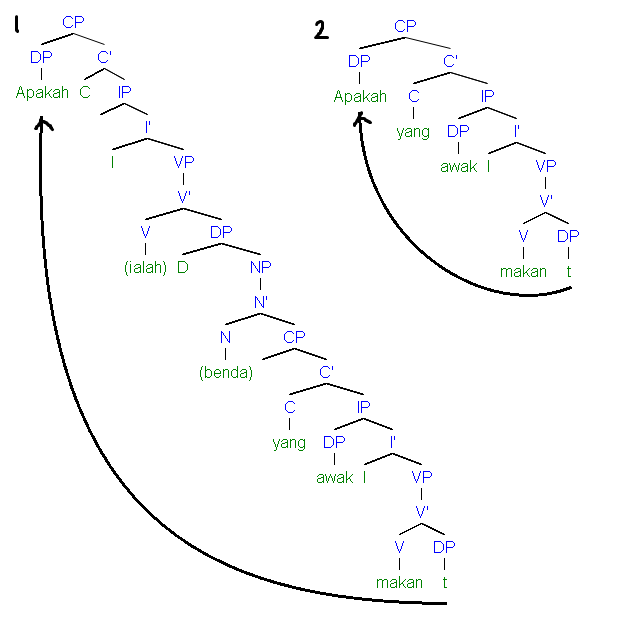 My take is that the complementizer is still a complementizer, not a nominalizer, due to the fact that the noun modified by the relative clause is optional. E.g.:

In cases of predication, can there ever be no linker or copula?

This makes it enticing to say that there is the copula 'ialah', although unpronounced, in the structure. This is to serve as a linker for the wh-phrase and the nominal predicate. However, I can't find any evidence to support my claim about there being a zero-copula besides the fact that copulas are largely optional in Malay. My intuition is that tree 1 seems more plausible.

Tree 2 seems a bit strange to me because I've never seen a [+wh][-pred] wh-phrase followed by a [-wh][+pred] complementizer as in tree 2 before, but I'm not so sure about this.

I don't know enough linguistics to answer your second question, but the pseudocleft question formation reminds me of the way formal questions are formed in French.

The fixed expression "Qu'est-ce que" with the accusative relative pronoun "que" is used to ask a question about the object of a verb, while "Qu'est-ce qui" with the nominative relative pronoun is used to ask about the subject of a verb. Questions with a preposed wh-phrase can also exhibit simple inversion of subject and verb, as "Que manges-tu?", but this is another level up in formality and isn't common in spontaneous spoken language.

The in-situ wh-phrase is not used ('Mangi cosa?' seems akward).

The register is either informal (che ommitted) or formal.
More often found in progressive form: 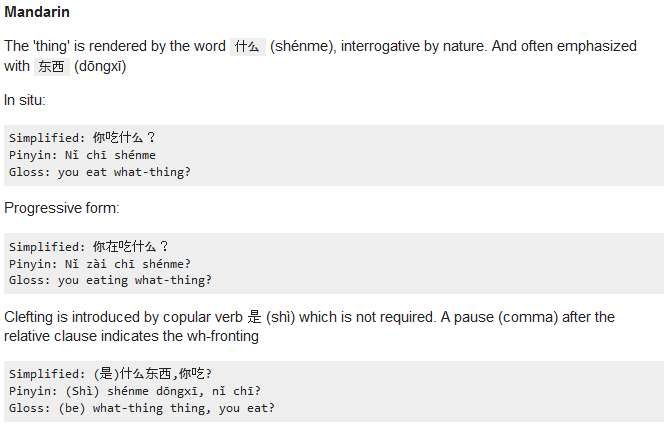 Sorry but the mandarin part is a bitmap because of this. Please feel free to comment and I will amend/edit accordingly.

11
Why are affix hopping and head movement considered as distinct operations?
1
Classification of Relative Clauses in English
2
Logic disambiguation in composed sentences with negative predicates and "or" conjunction
2
Pseudosluicing and Isolated NPs
4
What is it called when words like "what" and "how", aren't acting interrogatively, and aren't relative-pronouns?
7
What constitutes a Long Distance Dependency, and how can it be quantified?
3
Difference between primary and secundary predicates(/argument small clauses) and their (overt) 'heads', and transition/ambiguity between the two