How do surface and deep syntax differ in dependency grammars?

Consider the sentence I will go to Belfast tomorrow. How do its surface and deep syntax tree differ in a dependency-based grammar?

There are two main differences:

The idea is that deep syntax structures should be as language independent as possible. In your sentence "will" is only a tense carrier and "to", though being a semantic preposition, functions as a case marker (illative). From a graph-theoretic perspective, to translate a surface tree into a deep dag is to remove all the nodes that represent function words from the graph. Thus at the level of deep syntax a sentence has the same structure in all languages unless there's a lexico-semantic mismatch (in which case the edge labels will be different).

From a logical perspectives, deep syntax dags are "hierarchical logical forms". Lambda calculus could be used to incrementally assemble the logical form and there's a one-to-one relationship between logical forms and dags.

Also worth mentioning is information structure which is sometimes added to dags (though it's not part of syntax sensu stricto). It may be expressed as an ordering on nodes (as in FGD). Note that to fully account for syntax one needs a LP component (such as topological trees) which means that surface dependency trees are uninformative since they can be reconstructed from structures at the other levels. They can be view as a blend of topological trees and deep syntax dags. Surface trees tell us little but are structurally closer to the phonetic form of the sentece.

That depends of course on the particular dependency grammar (DG) that one chooses. There are many versions of DG, and they disagree about such matters in important ways. Lucien Tesnière, the father of modern DGs, did not distinguish between deep and surface syntax. He would have produced just one dependency analysis of the sentence, and this analysis would have lacked linear order.

An analysis in Meaning-Text Theory (MTT) might acknowledge seven different analyses of the sentence, since MTT acknowledges seven layers of representation.

Word Grammar would probably acknowledge just one analysis in terms of dependency arcs, and these arcs would appear above the actual sentence, which means there would be just one surface analysis of the sentence.

The type of DG that I prefer is monostratal in syntax, so there would be just one syntactic analysis. It looks like this: 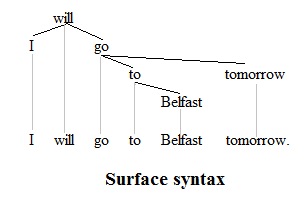 If I am forced to produce a deep syntactic analysis of the sentence, there are various ways that I could do it. All of these ways would, though, abstract away from linear order in the tree. Here's one possibility: 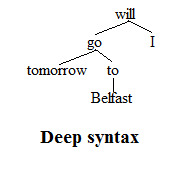 For me, these questions about the nature of deep syntax cannot be answered. We cannot see, hear, or measure deep syntax in any emperically verifiable way. I therefore prefer to avoid the notion of deep syntax, remaining with surface syntax entirely. Surface syntax is much closer to what we can hear, see, and measure emperically. But I know a number of DG people who strongly disagree with my position in this area.

In sum then, there is no one answer to the question that would be accepted by the DG community in general. There are, rather, a number of competing answers. The one who poses the question should therefore decide for him- or herself which of the answers is best.

3
How does a dependency grammar generate strings?
24
Why is constituency needed, since dependency gets the job done more easily and economically?
1
How do formal theories analyse the syntax of polysynthetic languages?
3
Is there a grammar of syntax that takes into account inherent syntactic ambiguity in natural languages?
3
How do you draw a Dependency tree diagram of a verbless clause such as "Me too"?
3
How to interpret the dependency parse tree of an English Slot Grammar?
3
In what ways might dependency grammar be a better fit for free word order languages?
1
Syntax trees associated with Prepositional Phrases as subject