The picture at the bottom is taken from Introduction To Sanskrit by Egenes Thomas, in which we see that, if a vowel different from a or aa precedes the visarga, and if the initial lettre of the following word is r, then the visarge disappears and the preceding i or u is lengthened.
But, from A Sanskrit Grammar For Students by MacDonell, A we find the statement that, in the above situation, the visarga should be changed to r, as r is a soft consonant.
Therefore I am confused as to which rule is correct, and post here to know what others think about it.
This is my first post here; tell me if any inappropriate points occur, thanks in advance. 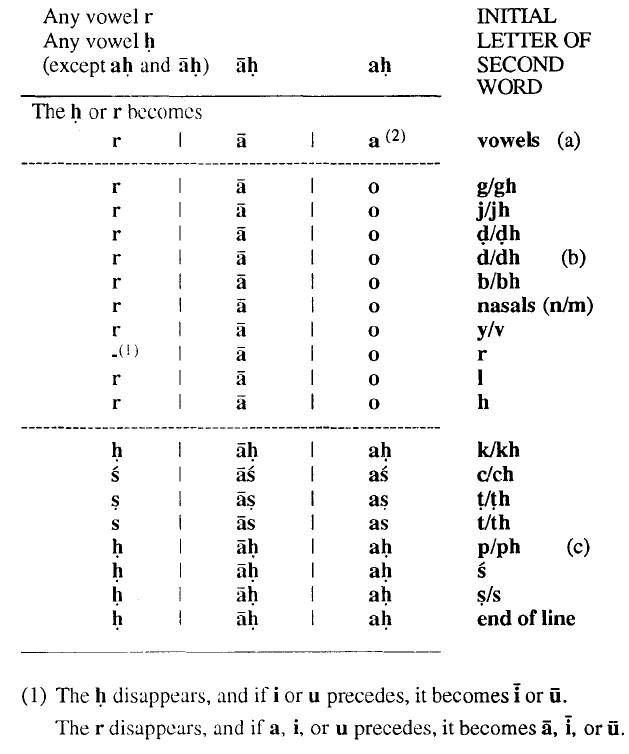 I think the confusion comes from using prepausal forms as the starting point. Both /s/ and /r/ become visarga pre-pausally, so Macdonnell treats /r/ as an 'etymological' exception. You get /punar api/ → [punar api/ but /devas api/ → [devo 'pi]. If the preceding vowel is /a, ā/ and the following segment is voiced, then /r/ remains [r] (except before /r/ where it is deleted). But /as/ is treated the same as /o/ (you could say that is becomes o, then is further changed to [a] with hiatus before a vowel, except before /a/). And /ās/ becomes [ā] before any voiced segment so /aśvās vahanti/ → aśvā vahanti (but /ār/ is unchanged, viz. ahār dāmnā). Whitney's treatment in his grammar is clearer, IMO.

To clarify, "visarga" is not an underlying segment of Sanskrit, is is phonetically voiceless [h] transcribed , and derives from /r,s/. Theoretically, there could be two distinct underlying forms, /grāmayos rāmas/ or /grāmayor rāmas/. In either case, the surface outcome would be [grāmayo rāmaḥ].

The standard reference grammar of Sanskrit is Sanskrit Grammar, by William Dwight Whitney.

Most English books on sanskrit attempt to rephrase Panini's grammar rules and in doing so, the conciseness of the rule is lost. An additional side-effect is that it takes several sentences to explain the application of rules. This is the natural outcome of all translations - I am not finding fault with them.

As before, the उँ in रुँ drops and we now have

Now 8-3-14 रो रि mandates elision (called लोपः) to a र् as another र् follows. This results in

Finally, whenever the elision of ढ् or र् happens, the previous अण् (i.e अ इ उ) gets elongated (called दीर्घः) So, after performing sandhi, the resulting word appears as

The second rule you mentioned from MacDonell isn't in conflict with the above. 8-3-15 खरवसानयोर्विसर्जनीयः asks to replace the र् at the end of a पदम् with विसर्गः as any letter from खर् (ख फ छ ठ थ च ट त क प) follows. As you can see, र् is not in this list of letters. An example of this rule would be as follows:

Note that the र् at the end of राम comes from the application of 8-2-66 ससजुषो रुः and two more rules, as explained above.

Further to this rule, the विसर्गः is replaced with स् by 8-3-34 विसर्जनीयस्य सः giving rise to

Not the answer you're looking for? Browse other questions tagged sanskrit sandhi or ask your own question.