Is there a unicode for words?

A good QA on StackOverflow led me to this great read about Unicode, The Absolute Minimum Every Software Developer Absolutely, Positively Must Know About Unicode and Character Sets (No Excuses!). It helped me understand the background of why the UTF-8 encoding is so needlessly (so I thought) complicated. Instead, UTF-8 elegantly solves the problem of backwards compatibility, minimum memory usage for the most common cases, and future-proofing (to a reasonable extent).

In summary, Unicode simply assigns numbers to all possible characters in the world, allowing room for more in the future. An 'a' is different than an 'A', but an 'a' in one font is not different from an 'a' in another font, or an 'a' in a different size. UTF-8, on the other hand, is an encoding scheme where Unicode meets implementation in real-world computer systems.

This got me to thinking about Unicode for languages. In theory, to a layman such as myself, all words encapsulate the knowledge of objects and ideas. Just as an 'a' is an 'a' no matter what font, the word 'tree' encapsulates the concept of a tree, no matter the language. But wait, 'tree' is the English encoding of the concept of a tree, isn't it? In other encodings (aka languages) it might be the equivalent of 'tall bush', or 'plant with thick bark', or 'leafy sky scraper'... I think you get the point. :)

It seems, with considerable and united effort, a "Unicode" for languages could be developed. Heck, it could probably be captured in Unicode itself, since it allows for future additions. And with this, translation problems could, eventually, be a relic of the past.

Is there a "Unicode" of languages, that either exists now or is in development?

To once and for all codify all of human language to enable the unambiguous cross-linguistic, cross-cultural and cross-temporal dissemination of thoughts and knowledge has been a dream for thousands of years. Its earliest origins, at least in Europe, date back at least to Raimundus Lullus (1232—1315); the big names in this story include the likes of Bishop Wilkins, author of An Essay towards a Real Character and a Philosophical Language, Gottfried Wilhelm Leibniz, and countless inventors of constructed languages around the turn of the 19th/20th c such as, most famously, L. L. Zamenhof, the inventor of Esperanto.

Much has been written and said about these subjects; a very comprehensive, analytic, entertaining and educating treatments of the subjects can be found in Umberto Eco's La Ricerca della Lingua Perfetta nella Cultura Europea (The Search for the Perfect Language in the European Culture).

I do not think this is going to work the way that many inventors of such schemes dreamed it could be, and the reasons are manifold. One difficulty that is easy to see is that 'words' do not denote constant, definite concepts—not across languages and not even within a single language across sociolinguistic domains.

If you absolutely want to pursue that effort anyway, may i recommend a healthy amount of reading; a few of the subjects that should be touched upon are the question about the reality of species, the demonstrated impossibility to represent 'the world' or 'human knowledge' as a hierarchical system (notwithstanding how many times it has been tried over again), expression of color words in languages, discussions about the merits and limits of efforts such as WordNet.

As a very straightforward point to start a serious implementation of your idea, may i suggest the following: Assuming that Wikipedia is a near-perfect representation of human knowledge (is it?), we may stipulate that all Wikipedia HTTP addresses that point to an article automatically become 'words' or 'codepoints' in the Universal Word Encoding (technically, this may be achieved e.g. by calculating hash codes from the addresses and translate those to some kind of numbers of some kind of pronounceable phantasy words). Then, let's trace all the translation links of all the words. Wherever there is a strong clustering of articles, we may assume that a given 'word' has a comparable meaning across many languages; we may then again identify that cluster by quoting one of its members (discarding all the synonyms).

I hope you can see where this goes. It's inevitably going to be a huge amount of pretty hard work. Basically, you'd have to absorb a major part of what's written in the world's encyclopedias.

Update @CivFan—"Pointing to the failings of existing solutions does not prove that no good solution is feasible."

In a way you're right and of course you're free to try and go boldly where no man has gone before. On the other hand, it would be foolish to ignore failed attempts and understand why those have failed. Ottmar Mergenthaler, inventor of the Linotype succeeded where hundreds of inventors had failed, namely, to devise a system to speed typesetting by mechanical means; this was, among other things, due to his deep understanding of what can be done and what had been shown to be not viable.

I have one more example where one should look for failed solutions, and this one is closely related to Unicode.

When you look at how Unicode is set up, you will see it is, in essence, just a linear enumeration of known characters / smallest units of writing gathered from the world's writing systems. Now, these characters are indeed collected into blocks that bear such names as 'Cyrillic', 'Greek', 'Arabic' and so on; however, as a rule of thumb, whenever you look at what a given language needs to get written, you'll typically find that it needs characters from more than a single Unicode block; also, the way that words are normally sorted in that language will most of the time only partially match the way those characters are numerically arranged in Unicode. These properties have been well known to the Unicode Consortium right from the outset, and they are not seen as shortcomings; rather, it is the general understanding that the convenient construction of US-ASCII (all 26 letters in right order; conversion between upper and lower case doable by simple bit switching) does not scale when you construct a code for multiple languages and multiple writing systems. This is relevant in so far as you are basing your ideas explicitly on Unicode; now we can quickly agree that the fact that Unicode does (successfully) exist, but a 'semantic Unicode' does not—might be indicative that the latter one is significantly harder to do than the former.

Part of the reason why Unicode does not provide, say, bit-swapping case mappings across languages and scripts a la US-ASCII is that Unicode has a linear code space, and there's only so much worthwhile complexity you can build into that single dimension. So, essentially, what this tells us is that if Unicode could not (and should not) make use of ingenuous arithmetic tricks to implement the ability to map lower case letters to upper case letters, then that much fuzzier realm of 'semantics' should be much harder to codify using a 'speaking code'. In essence, this means that whatever you come up with will be most likely either something that is not linearly ordered (but more network like or whatever), or, if it is linearly ordered, be a haphazard enumeration of concepts. This need not even be useless, but i wonder whether it is what you imagine it could be.

There is an obvious difference known between words and letters that should make Unicode systems feasible for letters, but does not apply to words. So far as I've noticed no one has mentioned it, so despite my having already offered one answer, I think I should mention the obvious.

Alphabetic writing systems have letters which correspond roughly to phonemes. You could think of them as primitive and traditional phonemic theories. Here are two things we know about the phoneme systems of the various human languages: (1) Each language has a very small number of phonemes -- around 50-200 -- which are very stable over time, and (2) the phoneme systems of the various languages are very similar, making practical phonetic alphabets like IPA and feature systems like that of SPE (with about 17 binary features, giving 2^17 possible sound segments).

Are the words of human languages anything like this, being very small in number and limited (and fairly well understood) in their reference? No. Not at all.

Unicode (within and beyond the BMP) has nearly 75,000 code points for CJK (Chinese Japanese Korean). The vast majority of these characters are actual words (most modern Chinese words are made of more than a single ideogram, yet most Kanji/Hanzi characters have meanings equivalent to our words).

More generally Unicode encodes many (at least partially) ideographic writings (many of them from ancient languages: e.g. Hittites, Cretan and Egyptian hieroglyphs, etc...).

So Unicode already has a lot of characters for "words".

Having one character per word could seem a nice idea but there are a few hurdles in the way of course. If you have one character for each word, you need: 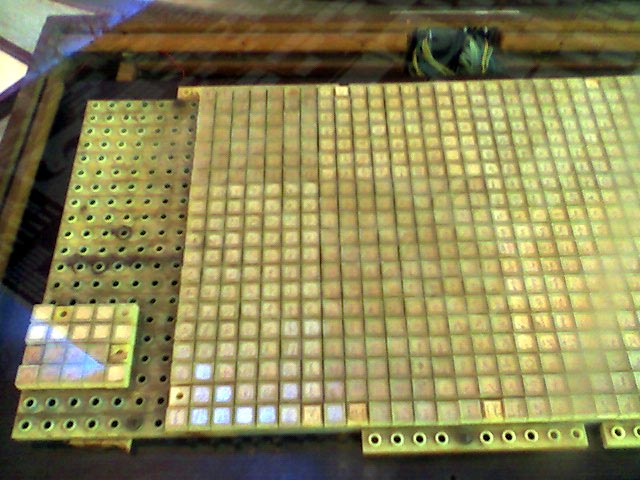 So basically, a Unicode for words, as you put it, is probably for the time being a regression for many synthetic languages. After all, before the advent of computers, the Phoenician alphabet was hailed as an important progress.

This might change with the generalisation of Text To Speech and Voice Recognition technologies. But we're not there yet.

9
Is there serious scientific evidence/vindication for the "linguistic fingerprint" concept?
4
Is there a term for "the number of words that must follow a given word to complete a phrase"?
2
What are the phonological rules or constraints for these pairs of words?
0
People learn words, but invent sentences