What is the substrate of Romanian language?

I mean what was the native language of Wlachs and Dacians before they adopted Latin?

the Dacians spoke a language called Dacian. Unfortunately, there is almost nothing we really know about their language, there are no surviving inscriptions or other texts. Essentially all we have are some toponyms and personal names, and a list of about five dozen plant names (see, e.g., https://en.wikipedia.org/wiki/List_of_Dacian_plant_names).

With this small amount of evidence, it is hard to make any sound claims about the Dacian language. It was probably Indo-European, and it is speculatively grouped with the (similarly ill-documented) Thrakian language into a now extinct branch of Indo-European. Thrakian is the language the Wlachs spoke before adopting Latin/Romanian.

I will first answer to the title of the question, namely "What is the substrate of Romanian language".

Romanian could have several substrate layers. The most frequent one is the Dacian layer, which was the language spoken in the region of Romania prior to the adoption of Latin. Dacian was an Indo-European language for which we have very limited material (place names, ethnonyms, plant names and various words attested by ancient authors). Dacian is considered to be related to Thracian and is sometimes bundled for convinience under a group called Thraco-Dacian. Our account for claiming a relationship between Dacian and Thracian is Strabo (7.3) who writes: "the Dacians speak the same language as the Getae". Earlier in the same chapter he writes: "The Greeks indeed considered the Getæ to be Thracians". So, Getæ = Thracians and then Dacian language = Getæ language, makes Dacian = some dialect of Thracian (?) according to the Greeks. That is the indication, but we cannot take it for granted, especially if we examine the Dacian toponymy.

Examples like the above have lead some to assume that Albanian and Dacian share pre-history and that Albanian could be a result of a east-Balkanic migration towards Illyricum (Orel V., 2000).

Except from Dacian, there are traces of Old European, Mediterranian and Celtic words. The OE and Mediterranian words can be somekind of a Pre-Indo-European substrate, but the Celtic words are either a post Dacian layer or words that were brought by Romanized Celts at the same time as Latin.

As for Vlachs (mentioned in the body of the question) who speak Aromanian, the question is too broad. Their homeland is not pin-poined and they could be simply romanized wandering shepherds of different ethnic groups and languages.

The Thracians and their language, Contains information on Thracian and Dacian, inscriptions and their phonology PIE > Thr.Dac., retreived 2017-01-08

Some think that the Romanian substrate was a language related to modern-day Albanian, but I'm not sure how solid the evidence for this connection is. For example, Romanian viezure "badger" and Albanian vjedull "badger" seem to be related (neither is clearly of Latin origin), but it is unknown if they are from a common substrate, or if the word came to Albanian from Romanian, or some other possibility.

To sum it up: Romanian substrate is more complex than what the formula Romanian=Latin+Dacian might suggest, and Romanian is not just "Latin spoken by Dacians". The Dacians by themselves (and their language) do not count for the entire Romanian « substrate » (linguistic or otherwise).

In this sense, the substrate of proto-Daco-Romanian (the neo-Latin language that evolved into modern Romanian, but that is not identical to Romanian and that we do not in fact know) might have been more than Dacian (Dacians might have spoken different languages, more or less related), just like the Romanian substrates (that is of the present Romanian) must include at least the Slavic influence.

"Vlachs" is a term that initially refers to all Eastern Romance, including Romanians south and north of the Danube, that is to people that spoke a neo-Latin language that is either close or identical to Romanian. Dacians were a group of Indo-European warlike tribes closely related to the Thracians but with some admixture of Iranian north-of Black Sea steppe peoples — at least in present Moldavia and Wallachia, where population density must have been lower than in Transylvania. An unified Dacian kingdom (centered on Transylvania) was created for short periods on two occasions, under the kings Burebista and Decebalus. Their raids south of the Danube triggered Roman reprisals and in the end full conquest and occupation of the Transylvanian region.

We know only a few words that can be supposed to be Dacian or related to that language. Not only we do not know Dacian (an unwritten language), but we do not know if Dacians spoke one or multiple languages. That thing is not surprising or exceptional: we know close to nothing not only about the languages of Dacians, but also of Tharacians, Illyrians, Peonians, even Macedonians, nor do we not know whether every such language was really one language or a multitude of dialects more or less related.

The Greek and Latin authors were not interested in linguistics, not at all: and we know nothing from them about ancient languages. If our knowledge would be limited to what they tell us, we would know as little about the Celtic and German languages as we know about the ancient Balkan ones. And what we see in the German and Celtic area is a huge diversity, just like in Italy (where, if the Etruscan had been illiterate we would know nothing about their language from the Romans — or the Greeks).

How could the Balkan region, or just Dacia, have been more homogeneous linguistically than Italy was before the Roman conquest? In order to imagine that homogeneity we have to project into the past recent national identities or into "barbarian" areas what we know about Greeks and Romans. But without a centralized state and a bureaucratic administration based on writing a such linguistic integration is not in fact imaginable.

The relative lack of unity of the Thracian-Dacian languages can easily explain the rapid romanization, through the immediate adoption of one single language as a means of larger communication in an area where a such means was missing before the conquest.

Most probably Balkan linguistic integration came with the Roman conquest and through the Latin language, not before and in contrast to them. The Balkan Sprachbund can be imagined as a result of that integration, and thus represents the "substrate" of Romanian, one common to Bulgarian, Macedonian, Albanian, and influencing marginally other languages like Greek, Turkish, Serbian.

The aforementioned projections and the homogeneity of Daco-Romanian have greatly contributed to the creation of a popular image of one single Dacian language, closer to literary Latin than to anything else (given that even literary Greek had different dialects!) — an image common of course especially in Romania: because Romanization/replacement of such a language during such a short time of occupation (106 to 275 AD) was hard to imagine, some delusional "theorists" have imagined the protochronist scenario where Dacians didn't need to be latinized, as they already spoke the same language as the Romans (or a very similar one — when not even the Italic peoples, except in Latium, did that!), etc. That fantasy is in a way made necessary (when mixed with gross ignorance) by this idea of one-Dacian language.

As for the Daco-Romanian homogenity (compared to Italy, Spain and France), that can and must be explained not as the reflection of ancient linguistic homogeneity in Dacia but, like in the case of other East-European peoples (Poles, Hungarians, Bulgarians, Russians) as the result of a sudden and relatively recent territorial expansion into scarcely populated areas: in the case of Romanians with the difference that the expansion took place not from outside into the Balkan area but within the Balkan area from some central point, like the East of the Carpathian basin, and/or some area of the Balkans, most probably before and during the Second Bulgarian Empire, also enhanced with the Hungarian stabilization against the Mongols and the creation of the first independent Romanian states. Looking at the linguistic map of Romance Europe, a similar homogeneity can be seen in Spain in areas conquered in a few hundred years from the Arabs (who fled that territory) — starting from a central point of expansion (Castilla and Aragon). 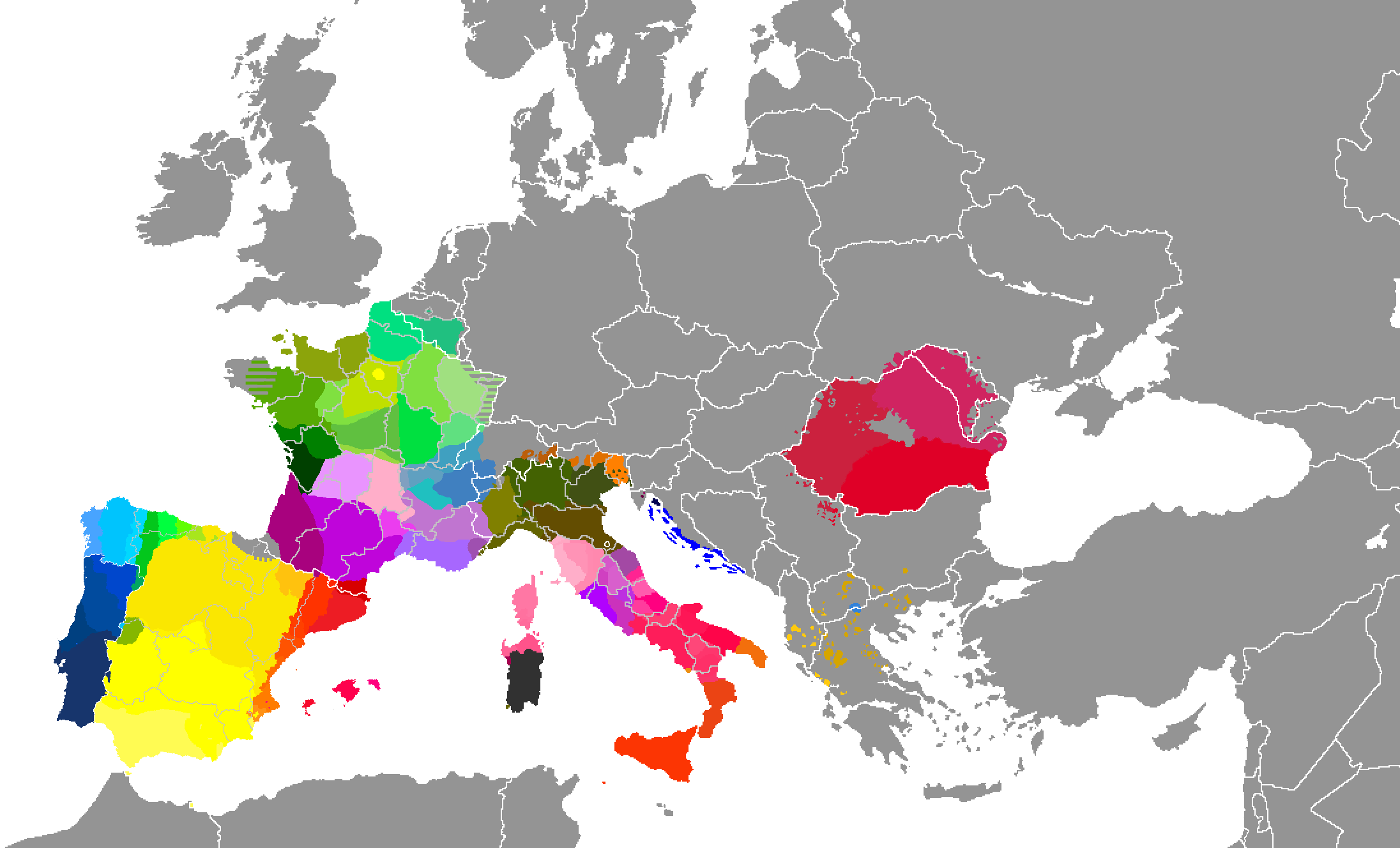 Most of the above is based on ideas from Dan Alexe, Dacopatia şi alte rătăciri româneşti, available only in Romanian I'm afraid.

Not the answer you're looking for? Browse other questions tagged historical-linguistics native-language romanian substrate or ask your own question.

9
What is the history of the sound spelled <â> or <î> (IPA /ɨ/) in Romanian?
6
Determining my native language
0
Would I be considered a native English speaker?
4
What is the current understanding of the substrate(s) to the Indo-Aryan languages
8
Why is the Romanian tense system so "simple", compared to other Romance languages?
3
Etymology of Romanian "amor" (cf. "iubire")
2
Excepting Romanian, is "Wales" ever translated/transliterated in modern languages with the same term as that meaning "Gaul" or "Gauls"?