How did the Latin stem '-duce' evolve to mean 'from an effect'?

From the following (on the 3 derivatives of ducere), both 'induction' and 'abduction' presuppose 'an effect', but 'deduction' produces (I intended this use of another derivative of ducere) 'the effect' as the result. This observation suggests that in addition to the Latin root ducere's meaning as 'to lead', the stem -duce denotes an additional meaning (abbreviated to AM), that of a direction of logic, capsulised as the additional prepositional phrase: FROM 'an effect'?

1. How did the stem -duce evolve into this AM?
To wit, why is the starting point of -duce 'an effect' (and not a rule or a cause instead)?

2. In which language and about when did this AM develop?

[Source:] Deduction: Given the rule and the cause, deduce the effect.

Induction: Given a cause and an effect, induce a rule. 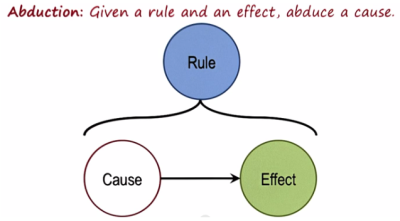 PS: I omit similar diagrams for 'deduction' and 'induction', to minimise this post's length.

Your question has some false presuppositions. In general, when trying to understand the historical relationship between words of English that seem to historically share a root, where Latin in the apparent source language and the subject matter is anything vaguely philosophical, you have to start with the actual origin, which is usually Greek. The relevant terms in Greek are ἀπαγωγή which maps to English "deduction" and ἐπαγωγή which maps to "induction", as Sumelic says. The English terms developed from Latin, and the Latin terms were translated from Greek.

It would be entirely off-topic for LSE to get into the details of what "induction" and "deduction" are in philosophy. As philosophical terms, the shortest path for understanding the relation is to understand the concepts ἀπαγωγή and ἐπαγωγή in Aristotle's work. As an aid, I suggest John McCaskey Regula Socratis: the rediscovery of ancient induction in early modern England (2006 Stanford dissertation), which will get you conceptually (not linguistically, but with due attention to terminology) from ἐπαγωγή to induction, as understood by Bacon. You should be aware that at the conceptual level, συλλογισμός corresponds to "deduction" (synopsis here), so one can rightly wonder how "deduction" entered the picture in Late Latin.

Perseus has nice Greek study tools that point you to instances of particular words, so you can look up ἐπαγωγή, and ἀπαγωγή. Cicero created the translation inductio: to understand why, you would need to understand the component parts in Latin, and the component parts in Greek, plus understand Cicero's ideas of what constitutes "good translation". For dēductiō you have the additional philological problem of figuring out how it got associated with συλλογισμός. Aristotle's logical terminology is already the result of substantial semantic change within Greek. Concrete meaning associated with the root (which is ἄγω) are "bring in, invade, introduce, lead away, influence, carry". The semantic contributions of the prefixes απο, ɛπι are even harder to pin down -- while the prefixes no doubt had a compositional meaning in pre-Indo-European, you just have to learn the specific meanings of many of these prefix-verb pairs, with the help of some vague semantic family resemblances. Reading the entry for Latin dūco should show you why Cicero selected that root (you'd need to dig deeper into Latin to determine whether this is really the closest semantically-corresponding root, but it's clearly close enough).

I think the source of your presuppositional error was the idea that deduction is about "an effect". Basically, you were misled by a social-media explanation of philosophical terms which bear scant relationship to the original concepts in philosophy. I would suggest starting with the Stanford Encyclopedia of Philosophy to understand the concepts better, then do the etymological search back to the Greek roots. The linguistic content of your question could then be: are there Latin roots besides dūc- which better approximate the meanings of αγ-; what are the semantic properties of ab-, in-, de- as verb prefixes in Latin, or Greek απο, ɛπι; various questions about the semantics of prefix+verb constructions in Greek.

The roots of classical logic lie in Ancient Greece. Because of this, many Latin terms dealing with philosophy and logic were either taken from Greek, or modeled after the structure of Greek words (that is, calqued). So I thought that researching equivalent terms in Ancient Greek might shed light on your question.

According to Etymonline, the pair of words induction and deduction were used to translate the Ancient Greek words ἐπαγωγή "epagōgḗ" and ἀπαγωγή "apagōgḗ", respectively. These are composed of the prefixes epi- and apo- plus a derived form of the root verb ἄγω "agō," which appears to have had a similar meaning to that of the Latin ducere.

Epagoge is generally translated in a philosophical sense as "induction," and is said to have meant "bringing to" in ordinary speech.

Apagoge seems to have more variance in translation. While Etymonline lists it as the equivalent of "deduction," I have also found a paper that translates the term as "abduction" or "reduction": The eco-cognitive model of abduction: Ἀπαγωγή now: Naturalizing the logic of abduction. This paper gives the ordinary meaning of apagoge as "leading away."

Not the answer you're looking for? Browse other questions tagged etymology latin logic or ask your own question.