What are the syntactic functions in this example of Dutch cross-serial dependencies?

Sentences like the following occur frequently as examples for cross-serial dependencies in Dutch.

Often the dependencies are depicted only as arcs between Jan and zag, Piet and helpen, and Marie and lezen. I found the following non-projective dependency structure for the above sentence in http://www.mitpressjournals.org/doi/pdf/10.1162/COLI_a_00125: 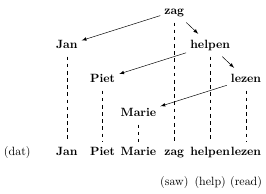 This figure does not contain syntactic functions at the edges.

(In my conception the figure depicts a graph (in the mathematical sense) whose nodes are word forms. An arrow-shaped edge indicates a dependency between two words, where the direction of the arrow is from head to dependent. This edge can be equipped with a label specifying the type of argument or adjunct (direct object, subject, etc.) the descendent is for its head; which is not the case in the above figure. A dashed edge indicates the position of the word in the sentence.)

In some publications I found constituent structures for this sentence, where Piet and Marie are attached as direct object in a sibling position to the verb complements helpen and lezen, respectively. However, if Marie is attached below lezen, then labeling this edge with direct object does not seem plausible to me (as linguistic layman).

Is the depicted dependency structure plausible at all?

What would be appropriate edge labels?

the question word Wem is governed by geholfen, rather than by hat. A government-based dependency grammar will then connect Wem and "geholfen*, which results in a non-projective structure because the dependency edge connecting Wem and geholfen will cross the projection edge of hat (and that of er).
A number of dependency grammarians regard the limitation on government as too restrictive, and they view the apparent non-projective dependent node (Wem in the above example) as somehow displaced. My own take on this phenomenon can be found here. That paper also contains references to other authors within the dependency grammar framework.

In a projective dependency grammar, such as the one I prefer, the depicted structure is not possible. Rather the nodes Piet and Marie would attach, i.e. be connected via a dependency edge, to the highest verb node, namely zag. Such a constellation is licit under the following condition:

Rising
A node A may be immediately dependent to another B, even though B doesn't govern A, if B dominates the node C, the governor of A.

In my example, Wem = A, hat = B, and geholfen = C. Since B hat dominates geholfen, Wem may rise in order to connect to hat. There are a number of constructions that elicit rising, but they have different syntactic properties.
[I'd also like to emphasize that I believe that the depicted tree structure is inaccurate even on a purely non-projective approach. Piet is governed by zag, in a specific construction that requires an infinitive verb, here helpen. Hence Piet is not a dependent of helpen. The same holds for Marie, which must be a dependent of helpen, rather than of lezen. In non-projective systems, semantics sometimes occludes the appropriate syntactic relationships.]

The answer to the second question, i.e. "What would be appropriate edge labels?", must first decide on whether the apparatus is projective or non-projective. If it is non-projective, standard (i.e. government) labels are in order. In the Dutch example, Marie would be the indirect object of helpen, and Piet the direct object of zag (rather than the subject of helpen).
A projective account can choose whether it wants the labels to reflect the actual dependency connections, or the underlying government relationships (which for the most part are identical; only in examples as the ones used here does a difference appear).
Yet another aspect is whether the grammar is mono- or multistratal. If the grammar is multistratal, i.e. employs more than one level of description, then labels may be transferred from one level to the next higher one. Or such a grammar may choose to use different sets of labels depending on the strata it uses at a specific moment.
If the depicted tree structure were correct (which it isn't as I argued above), the labels for all three nominals, i.e. Jan, Piet, and Marie, would have to be [subject], and obviously that cannot be true because the verbs helpen and lezen are infinitive forms, and infinitives cannot command subjects.

I hope that helps a bit.

This is Dutch grammar.

Not the answer you're looking for? Browse other questions tagged dependency-grammar dutch or ask your own question.

2
What are the upsides of using dependency parsing over constituency parsing?
4
Are the set of Dutch tussenvoegsels finite?