I'm running NLP on large texts, and part of the questions I'm trying to answer have to deal with syntax. I'm using Stanford NLP, including the Stanford Parser. I started out using the probabilistic CFG (PCFG) models, but that can take a very long time to process a large text with a sizable amount of "long" sentences.

I recently read up on the Shift-Reduce Parser on the Stanford NLP website, and according to them it's a lot faster than the PCFG-based parser while sacrificing little accuracy. The published benchmark doesn't explain in much detail what kind of text was used, however, so I don't have a good idea whether the promise of increased performance holds up in practice.

Has anyone experimented with the shift-reduce parser, and specifically compared its running time with that of the PCFG variety? It looks to me based on some early testing that the SR models cause the parser to consume a lot more memory, so I'm a little apprehensive about running it on my text corpus.

The website for the SR parser explicitly states that the measures were for parsing on the Penn Treebank WSJ (Wall Street Journal) corpus, section 23: 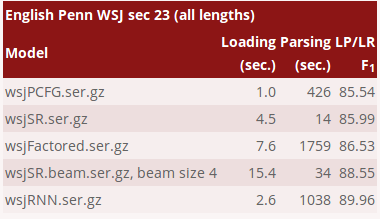 Not the answer you're looking for? Browse other questions tagged nlp parsing or ask your own question.

4
What is the maximum accuracy that can achieve a projective dependency parser in English?
1
What is the linguistic significance of dep and gov methods in Stanford NLP's Typed Dependency class?
5
Detecting actions within text
2
What are the upsides of using dependency parsing over constituency parsing?
5
Can training a Part-of-Speech tagger and parser at the same time improve parsing results?
2
Mapping Minipar dependencies to Stanford Parser dependencies