Arising from discussion against “Against traffic” or “Against the traffic” on ELU, I wonder if anyone can give an authoritative opinion and/or supporting evidence for the proposition that Americans tend to interpret ambiguous embedded clauses within "compound verb phrases" differently to Brits.

The specific example under consideration in that question had

I assume that if you know already which direction the vehicle itself is heading, the "correct" interpretation will be transparently inferred on either side of the Atlantic without the ambiguity even being particularly noticed. But my question is whether there's any evidence to suggest a UK/US difference in interpretation in the absence of disambiguating information, and/or a tendency to avoid using the ambiguous construction at all.

Apologies to anyone who thinks this should have been asked on ELU. I think it belongs here - but it's not really my call, so please just migrate it if I'm out of order.

In speech, of course, rhythm and intonation would probably make it clear what the speaker meant. In print, it's flat-out ambiguous, and I don't see any US/UK differences from the US side. I tend to doubt claims about Pondal and other dialect differences that aren't made by sociolinguists with data in hand. Many people assume that any difference from what they expect in speech or writing must be a dialectal difference, though most such are simply individual preferences and habits.

This is a case of PP attachment problem, the classic example for which is

I see the man with a telescope.

I would venture a guess here that this phenomenon is ambiguous in any language, regardless of national variety.

I have probably turned myself into a machine, but the sentences

mean very different things to me, and each has an unambiguous meaning -- not just in text (with punctuation) but in speech too (with intonation). 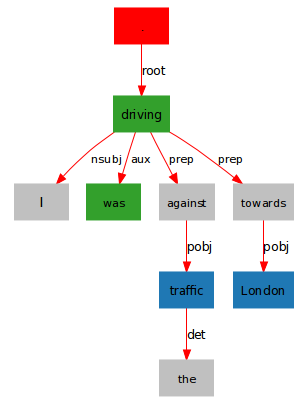 Despite the fact that most parsers (and I :-D) tend to treat these in a manner identical to the Stanford Parser, I do not claim that most speakers of English would see this difference between these sentences.

@FumbleFingers: I don't know about a UK/US difference in this case, but having done classes in linguistics with a few classmates from the US, I have come to the opinion that in matters of subtle interpretation, not all people from the same region tend to have the same opinions. How do you interpret the first sentence? How do you interpret it in speech? Do your RL friends from your region interpret it your way too?

Not the answer you're looking for? Browse other questions tagged cross-linguistic american-english or ask your own question.