is the percentage of people studying constructed languages increasing?

It seems it is very difficult to count the people able to speak to some degree some artificial language (or maybe any language in general), for instance is Esperanto usage surging, stable, declining?

I wonder if there is any other way (active use in mailing list, etc) of deducing if the communities learning these languages are increasing or decreasing.

As you point out yourself it is extremely difficult to measure the number of people studying constructed languages and especially difficult to measure the degree of language proficiency. Among all constructed languages only Esperanto has an examination system that is aligned to CEFR and certified as a UniCert course (CEFR is abbreviated in Esperanto as KER). However, there is a very small amount of people who pass these examinations, because professional language proficiency and certification thereof is not a goal for most Esperanto-speakers.

Traditionally in Esperanto they use the number of people who are members of UEA, the Universal Esperanto Association, the main organisation for Esperanto speakers. Here is the graph of UEA members over the last 100 years (taken from here): 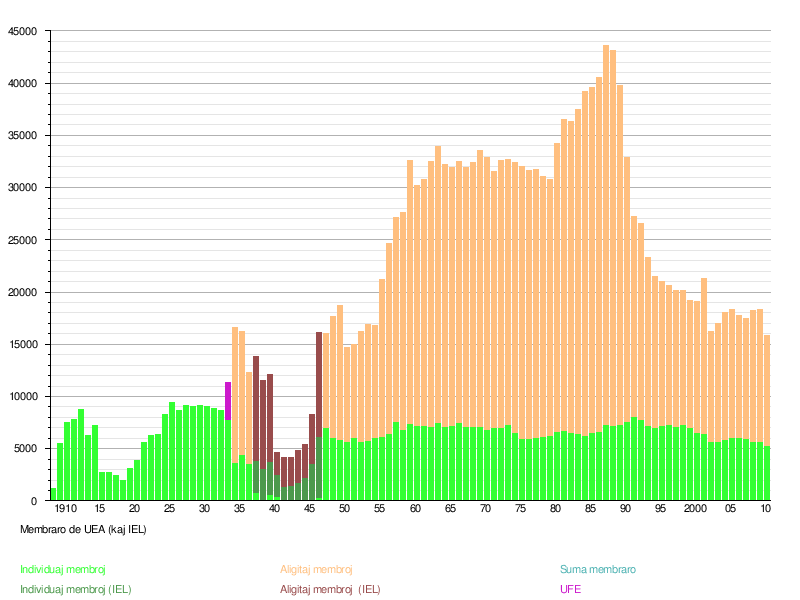 Another metric is the number of people who participate in Universala Kongreso -- the annual world conference of Esperanto-speakers. I don't have a diagram for this statistic, but you can see the numbers here. The fluctuations here are much bigger and there is no clear trend -- either increasing or decreasing -- seen there.

On the other side, membership in UEA and participation in congresses targets mostly established Esperanto speakers. Therefore another statistic was compiled taking into account the number of participants in popular Esperanto meetings in Germany: 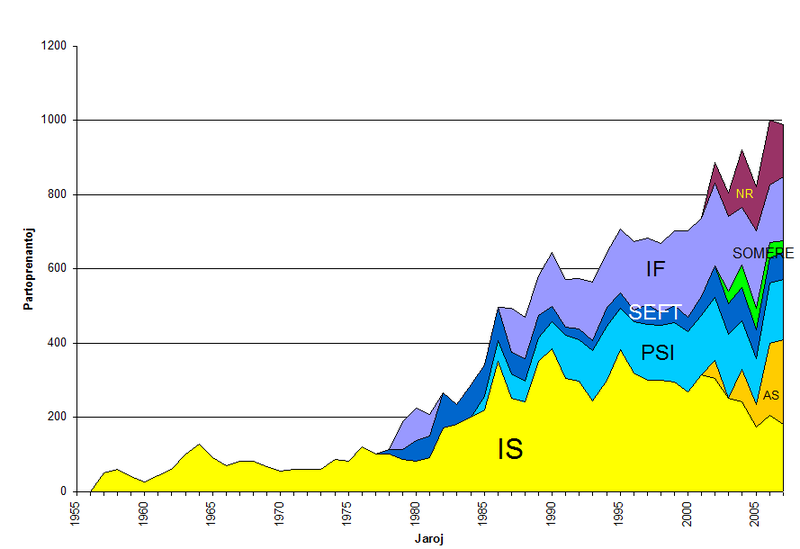 Here you can see that the number of participants seems to increase over recent years.

In conclusion, it is indeed difficult to estimate the current trend in numbers of people learning Esperanto.

You should look at the number of books published per year, and the rate of how fast Wikipedia pages in Esperanto are being created, too.

There were one or two really nice Wiki pages in Esperanto that had charts of a ton of this kind of data (and compared to the growth rate of English), but I lost the links, sorry.

From what I remember, the general trend was that every year it fluctuates but there's very slowly growing more and more, the average number of books published per year that are over 48 pages numbers at 120, and the only data in which the use of Esperanto seems to be going DOWN is in the number of people being members in Esperanto clubs and associations. (Nowadays, at least in the USA and many places in Europe, people in general aren't joining as many clubs as they used to overall no matter what it's for - also nowadays books can really easily be self-published online, so of course the book numbers can't reflect the real numbers either.)

Not the answer you're looking for? Browse other questions tagged constructed-language or ask your own question.