Responding to a question about differences of an entity [closed]

Say that someone asks you "What's the difference between those curves (see the image below)?" 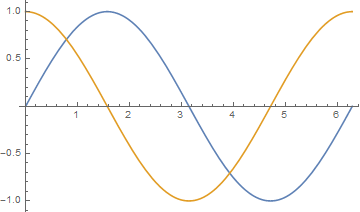 Given the definition of a curve as being "a line or outline which gradually deviates from being straight for some or all of its length."

Can you formally answer with "One is orange and the other is blue."? Or because the color isn't a part of the definition of a curve such an answer is invalid?

The appropriateness of a response derives from the context in which it is asked. If the context is a math class, then appeal to the formal definition of a curve would be appropriate and appeal to color would not be. If you were at a paint store, the opposite would be the case. Answering with a color answer in a math class would be literally true but also overly literal. Nevertheless, it is not totally inappropriate in a math class, since precision and explicitness are desiderata in mathematics, and asking "What is the difference..." is really a poor question, since one can refine the question without giving away the answer. One can omit the color difference, which is just a distractor.

One can answer that one is blue and the other is orange, but I don't think one can formally answer that way: but the question does not require you to answer formally.

Not the answer you're looking for? Browse other questions tagged logic or ask your own question.