Help with an ambiguous English syntax tree (studying for a final)

Sorry if this is the wrong stackexchange site for this question.

I'm studying for a final for my english linguistics class and going through example sentences that we should be able to draw syntax trees for. This sentence: "He looked at the dog with one eye" was marked as ambiguous. The rules we were given for a generative English grammar are as follows:

In this grammar, variables in parenthesis are optional for the phrase. So for the example sentence I have the tree 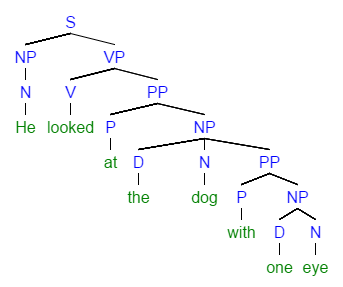 (made with http://mshang.ca/syntree/ if you find it helpful)

However, I'm having a hard time working out another tree. The phrase "with one eye" could refer to either be attached to "the dog" or directly to the verb phrase (and thus mean that 'He' only has one eye).

It seems to me that in order to represent the second meaning in a syntax tree, VP -> V (PP) (PP) would have to be a rule in the grammar.

Any help is greatly appreciated, thanks.

The problem is that the generative rule for VP is too weak. To handle 'at the dog with one eye' as two adverbial phrases, the rule should be something like VP -> [adverb] verb [[PP]] [NP] [[PP]] {allowing any number of sequential adverbial phrases}. Any PP generated under the NP formula would be restrictive to the NP, not adverbial. This new VP rule is still weak, as adverbial phrases include adverbs as well as prepositional phrases, and they can occur before the subject, as well as in the predicate: before or after the verb, or even after the object.

Not the answer you're looking for? Browse other questions tagged syntax english generative-grammar or ask your own question.

4
Syntax: How can this tree be built?
2
What is syntactically wrong with these sentences?
1
What's the technical term for illocative parenthesis?
1
Are imperative verbs starting a command subordinating conjunctions?
1
Help with constituency?
0
Can adjuncts modify nouns?
0
When are prepositional phrases sibling to leaf nodes?