Are sound changes regular now or not? I mean it seems to me that it's accepted that sound change is pretty regular, because of how sound changes are treated in etymology/historical linguistics. I even read that some argued that a certain reconstructed word isn't the ancestor of another certain word, because a certain sound can't be explained through the known/accepted sound changes. I don't know which word though.

How can this be explained, and why are sound changes so important in historical linguistics if they can be somewhat irregular? I mean the difference between the expected and the already existing reconstructed form were rather minimal, IIRC.

Edit: The 'now' in the first sentence can be ignored. I just used it as kind of intensifier.

I'm only an amateur in historical linguistics, so my viewpoint is fairly naïve. I'd say: not always, but often enough to make regularity the most important consideration in reconstruction.

In modern mainstream historical linguistics, there are several examples where irregular sound changes are accepted. The ones you outlined in English are good attested examples. Some of the least controversial reconstructed examples are found in the Indo-European number systems; the English word four and its Germanic cognates are pretty obviously related to words like Latin quattuor, despite the irregular correspondence of the first consonants; they are reconstructed as deriving from something like *kʷetwóres in Proto-Indo-European. The usual explanation for this irregular f is analogy with the five word (In the ancestor of Latin, an opposite, but in this case apparently regular, change of p to kʷ occurred in the word for five.)

Analogy causes "irregular" sound changes in many more places than numeral systems. The most common is probably inflectional paradigms, especially verbal ones. Paradigmatic leveling is a very important factor in reconstructing Germanic verbs, as early alternations like Grammatischer Wechsel have been mostly leveled out in the verbs of present-day Germanic languages.

Another, slightly less clear case is the prefix ge- in Germanic languages; see this question for more information: Verner's Law and 'ge-'. While there is apparently disagreement about the origins of this prefix, note that descent from *kom is not automatically dismissed because of the irregularity (in fact, it appears to be the most common viewpoint).

Why it is so important: I don't think I've studied etymology enough to explain this, but having a derivation through regular sound changes is just one (strong) piece of evidence for an etymological connection. Other factors are also important, and have to be weighed against this and each other. If someone dismisses a certain irregular reconstruction, I'd think it means that that the other evidence isn't strong enough to convince that person on its own.

I found the following posts about regular and irregular sound change useful, from the blog Language Evolution by the actual historical linguist Piotr Gąsiorowski:

There are 3 things happening with your examples:

For #3, for all of the vowels before /ɹ/, look at the phonetic environment. There's your explanation for why floor is [flɔɹ]. In very few dialects of Modern English, is [u:ɹ] even a sequence that is allowed.

In my native dialect of English (Pacific Northwest American English), that segment is only phonotactically allowed if the [ɹ] is its own syllable. So brewer is [bɹu:w(ə)ɹ̩ ].

This is also true for me of [l]. Fool and fuel are definitely two syllables for me: [fuwəɤ̯ ]~[fuɫ̩ ] and [fjuwəɤ̯ ]~[fjuɫ̩ ]

This is also true for my girlfriend, who speaks Australian English.

For phonological splits, those are more tricky. In Southern British dialects of Early Modern English, there was another shift after the Great Vowel Shift called the FOOT~STRUT split.

In Northern England and Scotland, as well as some dialects in Ireland, the vowels in FOOT is the same as the vowel in STRUT and FLOOD. Liverpool speakers would pronounce the vowel in FLOOD, RUN and SUN the same way they pronounce it in HOOD, FOOT, and BOOK.

Here's a map of England where the Isoglosses of this split are, per Wikipedia (this is the vowel for SUN in various British dialects): 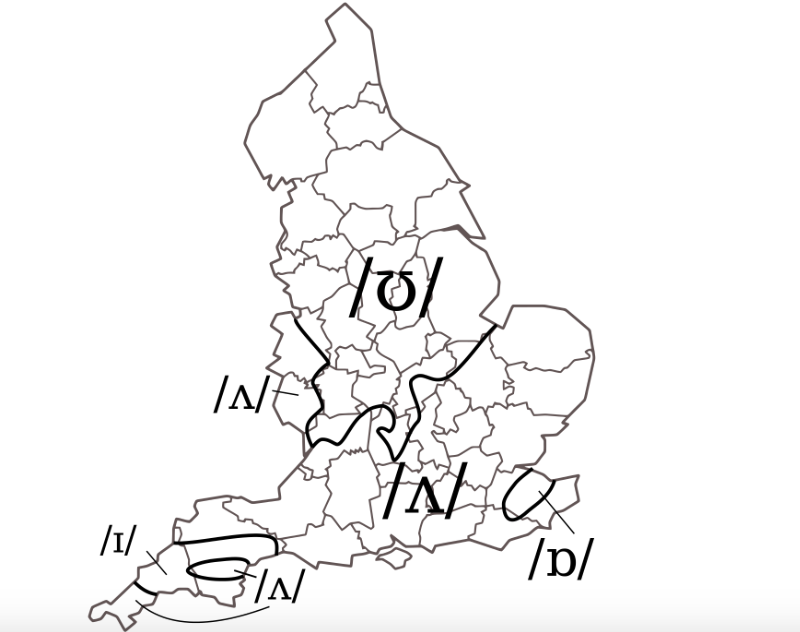 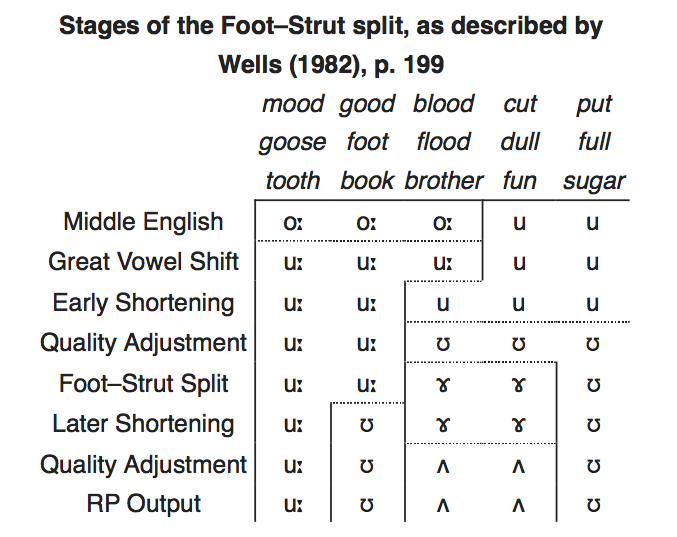 American, Australian, Canadian, and New Zealand varieties of English are all strut~put splitting dialects, because most of the initial settlers of the colonies came from southern and western England after the split.

The split was probably originally phonologically constrained, but then something happened to make it phonemic in many dialects.

Most sound changes start in a set of words, and then spread to more words. This is called Lexical Diffusion, and was described in depth by Kiparsky (1995).

It is pretty obvious from pieces written in Early Modern English, that the Great Vowel Shift did not happen all at once to every word in the lexicon.

In 1582, John Hart wrote his book An Orthographie in which he proposed a spelling reform due to the change in the language in his lifetime.

He designed a phonetic orthography based on his own speech, and spelled the vowel in TIME and BY as <ei>, but the vowel in MIGHT and TITLE as <ị>. It is evident, that the Great Vowel Shift started in a group of words, and then spread to others.

Kiparksy's original explanation for this was that some words have underlying phonological forms, while others are unspecified in the lexicon, and are instead built by analogy.

I personally find that explanation far-fetched, but there are some experimental phonology papers which would support it, I'll get back to those.

Another explanation would be an Exemplar Theory approach, where a speaker produces vowels based on their input. The entire system is analogy, but some more high frequency words might either be more innovative, or more conservative.

There is a bit of evidence supporting the idea that some words are more lexically encoded with phonological information, while others aren't.

In nonsense word vs real word production experiments such as Hay, Drager, and Thomas (2013), speakers often are more conservative with nonsense words than with real words: 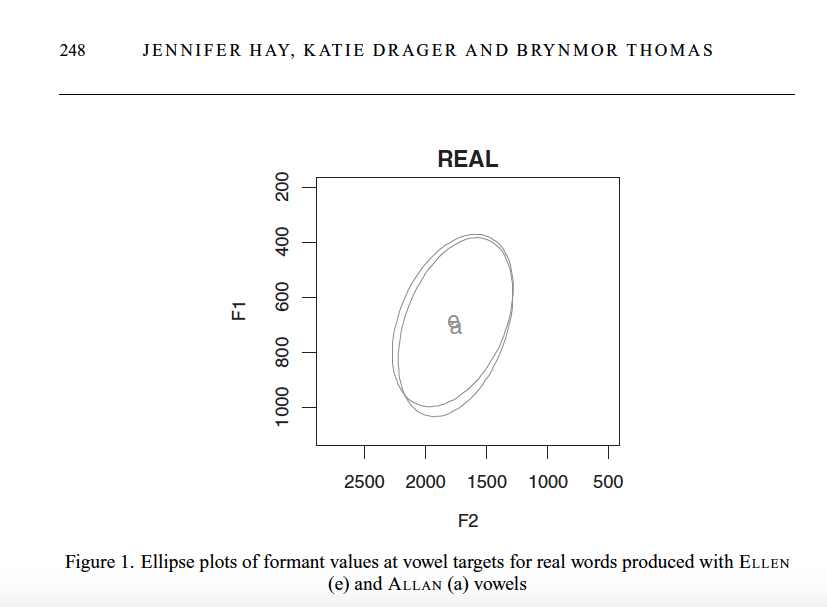 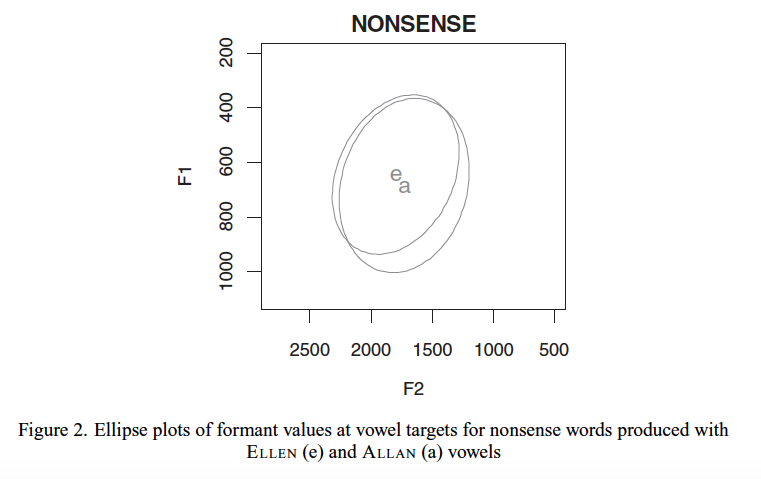 Under an exemplar theory approach, we would expect new words to be less innovative than high frequency words because a speaker hears less of them.

The answer would be, Definitely, Yes.

The entire science of Etymology and Historical Linguistics is based on this very principle.

Some linguists even consider the principle of regular changes to be a key, fundamental discovery of 19th century's Historical Linguistics.

If you take a modern word and you need to know its origin, you always trace an regular, unbreakable chain of transitions this word underwent. But you can scientifically prove these transitions only if the whole set of words having a certain sound underwent exactly the same change, not only this single word.

Each phoneme transition is considered uniform (regular) in a certain language on a certain period of time. These changes, being combined, can drive you straight to the etymological origin of a certain word.

Say, you are curious to know how Latin [faktum] became modern French [fɛ]. You then build the following chain of transitions. Note, each transition has occurred not just in [faktum], but in entire set of words having corresponding phonemes (or combinations of phonemes):

Once again, all changes happened not with [faktum] only, but with entire set of words having corresponding changes.

By using these fundamental laws, we can trace etymology of words that don't look similar at all. For instance, the word, "two" in Ukrainian is [dva], while in Armenian it is [erku].
Paradoxically, these two words are phonetically equivalent, to within a set of regular transitions.
For both of them, we are able to trace them step-by-step back to same PIE root, because every single transition in both languages happened not with this single word, but with entire sets of words per each transition.

So, back to the question. To see why exactly "blood" became different to "book", trace the chains of sound transitions for both words. Sooner or later you'll find a fundamental difference that caused these words to have different phonemes.

I think that phonemic sound changes are completely regular; but the sense in which they are regular has to be carefully described. Individual words (or, I should probably say "morphemes") can always be exceptional, just because we humans have enough phonetic facility to say specific words in lots of ways, as we choose. An everyday example is /bax/, the German composers, as distinct from /bak/, the type of beer. Even though /x/ is not a phoneme of English, lots of monolingual English speakers can say [bax], consistently, without assimilating it to [bak]. It's not that hard.

Formally, in a phonological account, we can assign the [x] -> [k] rule, which governs the English phoneme system, to those rules that obey Kiparsky's "derived environments" constraint. Such rules apply only in derived environements -- that is, when they become applicable by either the concatenation of lexical items or by the application of some phonological rule. In my view, this is not exceptional behavior, because all phonemic rules are like this. In order to pronounce a form that does not conform to the phoneme system of your language, all you have to do is to memorize that special pronunciation.

So, the only way a native word can fail to undergo a phonemic sound change is when the old style pronunciation is memorized ad hoc by some speakers, and each new generation of language learners has an opportunity to nativize the form before they have learned the archaic pronunciation from their parents.

What about dialectal remerging? In Dialect A, [Uu] remains [Uu]; in Dialect B, [Uu] goes to [U]. Perhaps the change in Dialect B might be 100% (ie, "regular"). But later (perhaps generations later), for non-linguistic reasons (economics, social unrest, etc.), massive migration between Dialect A and Dialect B occurs. This results in a hybrid A/B dialect. In this hybrid A/B dialect, we wind up with some [Uu]s and some [U]s. Now, there is no regularity; some of the original [Uu]s are still [Uu]; some of the original [Uu]s are now [U], and there's no phonological reason for it; rather, sociolinguist forces have chosen here [Uu]; here [U].

Not the answer you're looking for? Browse other questions tagged english historical-linguistics linguistic-typology vowels sound-change or ask your own question.

6
Verner's Law and 'ge-'
7
Why are sound changes regular?

10
Is there a comprehensive account of the development of laryngeal theory?
11
How diachronically stable are color terms?
11
Where do the spelling rules for French imperatives come from?
8
Why does word-initial upsilon always have a rough breathing?
5
How can we support that two words with different meanings are cognate?
1
Etymology of Slovene vrtnica "rose". Can it be the Slavic reflex of PIE *wr̥dʰos “sweetbriar”?
7
Why are sound changes regular?
3
Indo-European cognate calculator
5
How do we know that Avestan is sister of Vedic Sanskrit and not its daughter?