I've been reading Chomsky's The Logical Structure of Linguistic Theory, and have come up rather suddenly against a stumbling block. On page 133, he uses without explanation some notation that's unfamiliar to me. I've included an image because I couldn't figure out how to format the superscript & multiple subscripts together. I'm willing to do the work to understand this: I don't need someone to spell it out for me. I've figured out that ∈ and ⊂ are from set theory, and I've begun doing some reading on set theory. (The meaning of those two symbols, specifically, is easy enough, & it doesn't seem like I need much set theory to understand what he's saying here.) But I can't figure out what's going on with the italic, non-cursive capital C with both the superscript and subscript letters. How do I figure out the relationship between n and nᵢ? What should I be reading? I'm assuming that the lowercase and capital n/N have some standard relationship. What should I be looking into to understand that? 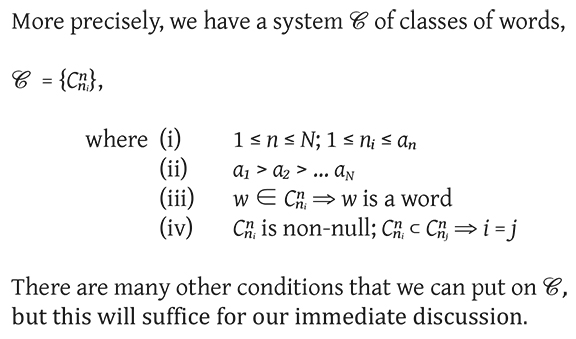 Once again, I'm very willing to do the reading myself. I've been Googling things like (Chomsky "set theory" symbols) and (Chomsky logic "set theory"), but no dice, as yet. I just need to be set in the right direction.

Much thanks for any help.

Browse other questions tagged syntax chomsky logic or ask your own question.

12
What is a comprehensive recent discussion of the status of Chomsky's universal grammar theory?
1
Problem understanding binding theory and c-command
3
Looking for a good mid-level reference on modern syntax
5
A syntactician "must-read" list
3
What is the difference between surface structure and logical form?
2
Understanding why Antisymmetry gives us SVO and not SOV