Does the syllable/word ratio in a language determine the number of vowel phonemes it has?

I've recently stumbled on this site dedicated to teaching English as a second language to Portuguese speakers. Right at the beginning, while making a comparison among English and Portuguese phonologies, the author states the following:

In less compact languages, with a small number of 1-syllable words and a higher average of syllables per word, the number of phonemes does not need to be large and the difference between each vowel can be bigger. This is the case of Spanish (5 vowel phonemes) and Portuguese (7 vowel phonemes). English, however, is a language extremely economic in the use of syllables, very compact, with a large number of 1-syllable words. Naturally, this requires a larger number of vowel phonemes to supply the bigger "demand" of a system with a reduced number of possible combinations.

I confess I had never thought about that possible causal relation. In retrospect, though, it seems quite a reasonable (and almost self-evident) hypothesis. But, of course, it ultimately has to be validated by hard data. So, my question is: has that claim been confirmed? Namely, that "more compact languages" have more vowel phonemes than less compact ones?

In Daniel Nettle's 1995 paper Segmental inventory size, word length, and communicative efficiency the author takes a sample of 10 languages and demonstrates a correlation between mean word length and the number of segments. 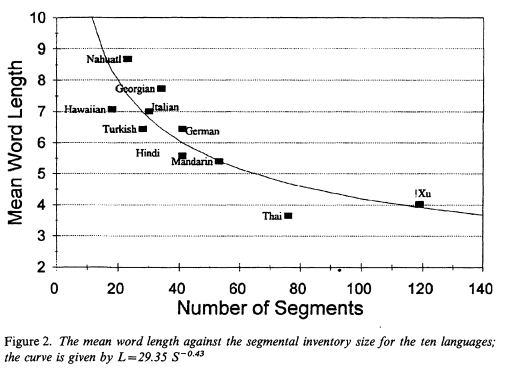 Nettle (1996), Coevolution of phonology and the lexicon in twelve languages of West Africa

However, none of these are indicative of a causal relation. As mentioned in this Linguist List discussion on Nettle 1995, Maori has a very limited segment inventory and their words are quite short.

One possible reason is that the metric of word length (either by segment or syllables) varies with morphosyntactic variability. A language may form predicates by using light verbs/phrases consisting of short words (dance -> do a fun move), in which case neither phonemic diversity nor word length are crucial components. It's also a methodological question what is measured by mean word length.

Syllable count can be a worse measure than word length because languages differ in how complex a syllable can be. A language with only open syllables ("sa") will need more segmental variety to convey the same amount of information with monosyllables than a language which allows complex onsets and codas ("sploink").

7
How do you determine the phonemes in small phonemic inventories?
4
What is the syllable structure of a word with an affricate in the onset?
13
How does vowel harmony typically arise in a language?
12
What's the evidence for and against isochrony?
2
Does the French word [fij] (fille) consist of a single open syllable?
0
most frequent syllables
5
Why do so many languages have both an alveolar "light L" [l] and a velarized "dark L" [ɫ] allophone?
7
Which language has the most vowel phonemes?
4
Can languages restrict their number of distinct syllables when written by syllabaries?
0
How to organize a phonology?