Gender-based name endings: Are they common?

For instance, if an English name ends in -a, it's likely female. But English has no grammatical gender, and there is no general requirement that nouns in -a refer to women. It seems like in English this is a pattern that applies exclusively to names. Does this sort of pattern occur in other languages?

This tendency ultimately comes from Proto-Indo-European (PIE), which is the common ancestor of many of the languages in which the pattern seems to hold.

PIE had three genders, like Latin, Sanskrit and Ancient Greek, and like in Latin, one set of stems was stereotypically masculine or feminine (ō-stems and ā-stems respectively, corresponding to the Latin second and first declension respectively).

The early daughter languages (and many modern descendants) declined personal names just as they declined common nouns. If there were noun paradigms which were stereotypically masculine or feminine, I would expect that personal names would be chosen to coincide with this.

As a point of conjecture, a bunch of personal names derive from attributes. If PIE speakers took attributes (adjectives) as names, then those personal names would take the same paradigm as adjectives, including agreement for gender and usual declination for case.

While Old English did have grammatical gender, it is completely extinct in that native words are not at all perceived as masculine or feminine according to their endings. The survival of perception of gender-based endings for names is probably attributable to extensive language contact with languages that have them. Particularly, as with many European languages, lots of Christian names were imported via Romance languages.

We would expect gendered name endings in the absence of grammatical gender to be peculiar to a few languages like English that both lack gender and have borrowed names extensively.

However, a similar phenomenon could apply in languages which retain grammatical gender whose inflections either have been sound-changed or are distinct from those of a language from which it borrows many names. The result is distinct inflections for common nouns and (subsequently-)imported names. For example, native German nouns inflect with various combinations of /ə/ /n/ /s/, whereas many female given names are instead indicated with /a/.

Interestingly, most Slavic languages take gender-based endings further: they even inflect surnames and patronymics according to gender. For example, Леонид Ильич Брежнев​ had a son named Юрий Леонидович Брежнев and a daughter named Галина Леонидовна Брежнева,

Most European female names end in "a" whether they are older or modern. The reason for this is the way Indo-European languages create gender in nouns.

By analyzing the grammatical gender of the nouns and names ending in a we can see a clear correlation: the gender of the common nouns reflects on the gender of names. For example the Spanish has approximately 89% feminine nouns with an a ending and 98% given names with the same ending.

The article "Why most European names ending in A are female" shows statistical data to support this theory for the Latin languages, Slavic, Illyrian, Germanic, Baltic and Celtic. 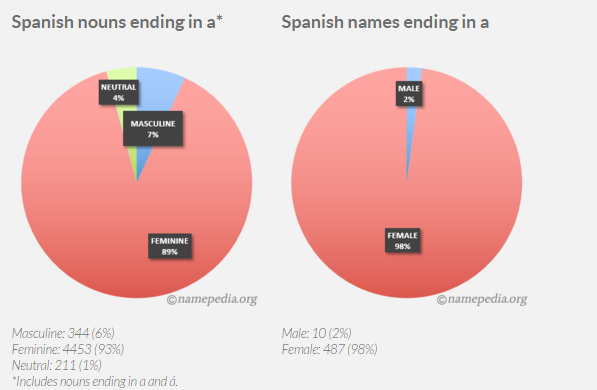 I'm not exactly sure what you're looking for here, but to give you an example of a language that you could say does show this, you could look at Welsh. There are girls' names that end, for example, with the suffix -wen (e.g. Branwen, Gwen, Awen) where the suffix carries the meaning 'white, fair'. There is a masculine counterpart to this in names like Gwyn or Wyn, also carrying the meaning 'white'.

Not the answer you're looking for? Browse other questions tagged gender names or ask your own question.

25
Are there any languages or cultures that have genderless given names?
3
Correlation between pronunciation of given names and gender

6
Proper names: does grammatical gender imply natural gender?
7
How does the reaction against gender-specific pronouns relate to a languages' use of gender?
7
Is there a name for a word which can take both genders?
0
Why are most given names so common?
2
How and when do French children learn to select between masculine and feminine forms of words when referring to themselves?
3
Correlation between pronunciation of given names and gender
4
Languages with masculine nouns for various female entities, or feminine nouns for male entities
4
Do any languages/cultures other than English apply non-grammatical gender to ships?
29
Is there a technical name for when languages use masculine pronouns to refer to both men and women?