Do Spanish speakers prefer certain words for certain aspects, like in Russian?

In an effort to clearly delineate durar and tardar to my Spanish students, I have been searching for some usage notes and I was not satisfied with anything I found.

Instead, I was wondering if these two words represent two aspects of the same idea, somewhat similar to how Russian and Slavic languages have different words for different aspects; like how the писа- stem is imperfective, and the написа- stem is used for the perfective aspect and both mean to write.

I decided to test my hypothesis by doing a simple word-frequency chart and I compared the following two words to each other in thousands of books in Spanish.

I chose the third person plural, because the verb tenses are unique. Whereas several other verb forms are not, such as the first and third person in imperfect; tardaba means both I took and He took. I skipped second person tenses because they seem dubious to search for in writing. 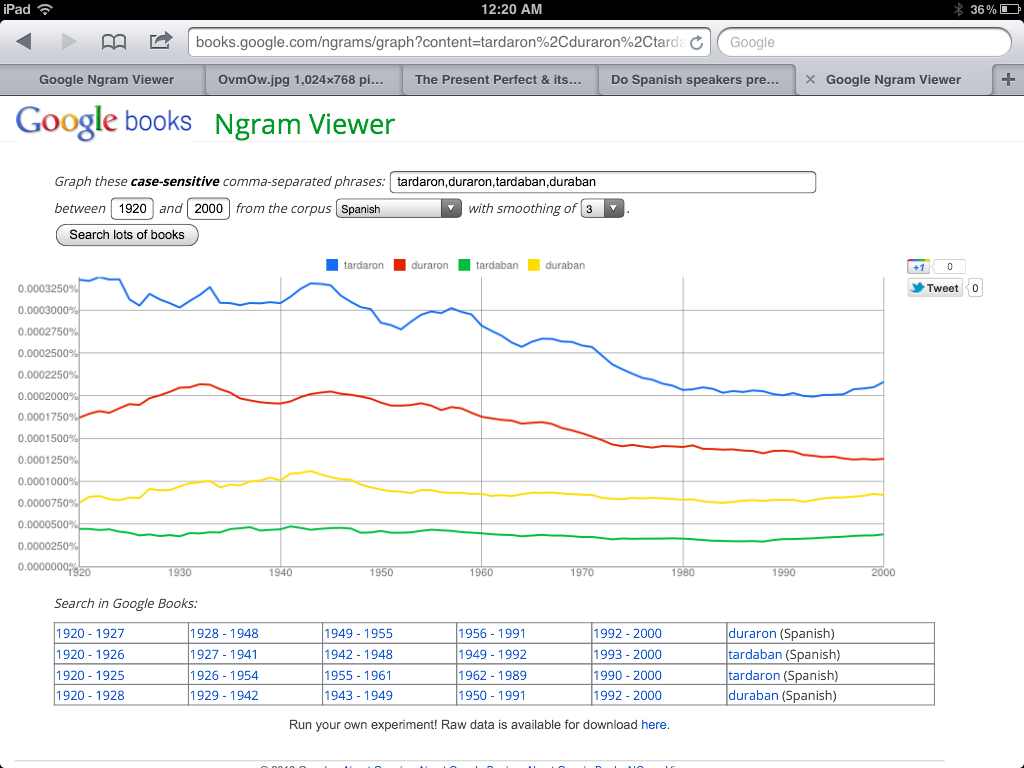 From the experiment it appears that Spanish writers prefer tardaron to duraron (preterite) about 2:1, and duraban to tardaban (imperfect) about 2:1, which is the complete opposite.

Is this because Spanish speakers subconsciously prefer tardar for the preterite/perfect aspect, and durar for the imperfect aspect? Are there any words that would presumably follow this order?

I don't think this is the same phenomenon, no.

You might be interested in learning about grammaticalization, the process by which statistical preferences (like you have in Spanish) gradually turn into hard grammatical rules (like you have in Russian). It would be possible for Spanish to grammaticalize the link between durar and the imperfect, so that, in a few decades or a few centuries, people would start feeling that forms like duraron were actually ungrammatical and not just unusual. But the link hasn't been grammaticalized yet, and it may well never be.

There are a more interesting example from russian language. It's pair класть and положить. A literary version permits only класть for imperfective form and положить for perfective.

Perhaps this is the really example of grammaticalization.

(This would have been a comment on Dan Velleman's answer, but I don't have the reputation for comments.)

In the hypothetical situation in which these verbs become associated with certain aspects as a rule, that would probably be called lexicalization. I.e., the "mental lexicon" entry for durar would specify it as being associated with imperfect aspect. The situation in Russian is far more developed than that, in that iirc every single verb has a perfect variant and an imperfect variant, and that systematically one has a prefix and the other does not. That would be grammaticalization because it really becomes a system, not just the idiosyncratic information of a lexical item. (Another important difference is that the Russian aspect distinction is maintained across tenses, i.e. reflected also in the present tense and even in the infinitive, which is again quite different from the Spanish case.)

But as Dan Velleman noted, the Spanish cases appears to (still) be only a tendency, and neither a reflection of lexicalization nor grammaticalization. Still, very interesting data!

Not the answer you're looking for? Browse other questions tagged verbs spanish aspect russian or ask your own question.

8
Is redundancy in language really impossible? (Case of the Spanish imperfect subjunctive)
4
What are the benefits of learning Latin using Spanish?
5
Does the Perfect in addition to its perfect meaning also denotes perfective / imperfective / either meaning (in English and Spanish)?
1
Has Russian to Spanish transliteration changed much over the centuries?
9
Is there really a perfect tense?
1
Is there a language where semantic aspect determines which tense is unmarked in a verb?