Is Conversion syntactic or morphological?

Can be considered to be a morphological (i.e. lexical) process. But there are arguments for it being a semantic process, rather than a morphological one. For example, in the first example sentence permit may indeed fit the syntactic category of being a noun, but is occupying the syntactic slot of a verb, so it takes on the property of a verb.

My problem is that I can't really think of a good argument in favour the syntactic argument and can't find too much clear literature on the topic.

I personally prefer the definition of conversion as "the phenomenon in which one base-word (stem) may function as a member of different lexical categories" (Don, Trommelen, and Zonneveld 2000: 943, cf. Mel'čuk 1973, Plungian 2011: 149). In other words, a stem that underwent a functional transposition A=>B starts to behave syntactically as other members of class B:

Class A (a lexical verb)

He permitted me to do so.

He permits me to do so.

He will permit me to do so. etc.

Class B (a count noun)

I need a permit.

How many permits did you have?

On the other hand, in languages with poor morphology where word classes might not have distinctive markers we find another phenomenon, category indeterminacy (or multifunctionality). For example, in Sranan Tongo (Dutch Guyana), Voorhoeve 1979 reports that the word hebi can mean "heavy; to be heavy; weight." However, Don, Trommelen, and Zonneveld 2000 argue that this phenomenon is different from conversion. In the case of conversion, there is always one "original" stem (class A in the example above), to which you can trace the transposed stem:

And the original stem is usually more frequently used than the transposed one:

You would like to find an analysis where, in the first sentence, permit "fits the syntactic category of being a noun, but is occupying the syntactic slot of a verb." Commenters are for good reason thinking you are talking about zero-derivation. To take it from a neutral perspective, we can assume that the analysis you are interested in is diagrammed roughly as follows. 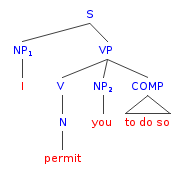 A word which is normally a noun is behaving as a verb. We can find more dramatic examples of this kind of behavior outside of English. Consider this pair of Tagalog sentences:

The first sentence is a basic intransitive clause, where the subject comes after the verb, and ang marks the subject as such. In the second one, things got flipped. What seems like it should be a verb is getting marked with ang, and lalaki, which seems like it should be a noun, is showing up in the verb's usual position. It is no longer clear what is a noun and what is a verb. The problem is that "noun" and "verb" are being taken to mean two different things at once. A noun is something that refers, and something that generally refers to an object. A verb is something that predicates, and generally refers to an action. The approach Van Valin (2008) takes in analyzing the Tagalog sentences is to do away with categories like NP and VP in favor of RP ("referential phrase") and Pred ("predicate"), so that only one of the typical functions of nouns and verbs is implied in the higher levels of the structure. A simplified version is like this:

For the English example, it will be harder to pull this kind of analysis off with the example you have chosen, because the semantics aren't very regular. The Tagalog example works because any noun can predicate and the meaning is "to be a N." It is hard to think of other nouns that could be analyzed like your permit example in English, where the noun predicates and takes a subject, an object and an infinitival complement. On the other hand, you might be able to analyze in this way a kind of aversive construction where just about any noun acts as a transitive verb, e.g.,

Meaning "Thomas did something which negatively affected Henry, involving N."

Not the answer you're looking for? Browse other questions tagged syntax morphology word-classes morphosyntax or ask your own question.

4
In English, is the use of the -ing participle verb form as adjectives or subjects or objects an example of conversion (a.k.a. zero-derivation)?

4
Is the commutative CFG in the mathematical linguistics literature?
9
Morphology of proper names
3
Subject/Complement Agreement. How to describe problem with “The thing is the objects.”
3
Can a language have both nominative/accusative and ergative/absolutive syntactic systems in its syntactic structure?
14
Why do neuter nominative and accusative always agree in IE languages?
2
Syntactic vs Morphological features for generation of English VGs