I am having trouble drawing a syntax tree for 3 sentences and I would appreciate it if someone could help me.

I would also be thankful if you can explain to me how to draw them, because I do not understand them very well.

The sentences are parsed as follows:

The trees have been made in the site phpSyntaxTree.

What is a tree?

A tree is a mathematical object consisting of a set of points called nodes between which certain relations hold. The nodes correspond to syntactic units; left-right order on the page corresponds to temporal order of utterance between them; and upward connecting lines represent the relation ‘is an immediate subpart of’. Nodes are labeled to show categories of phrases and words, such as noun phrase (NP); preposition phrase (PP); and verb phrase (VP). (Scholz et al 2011)

In my opinion, and I'm not entirely sure about the PP and the DetP (could be DP that splits into 'this' and NP 'giraffe'), it should rather look like this (using Redford's structure) 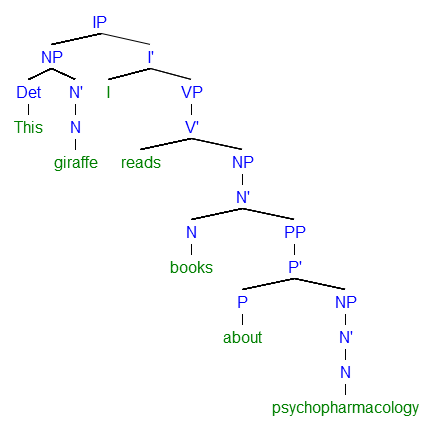 (I used http://mshang.ca/syntree/ to draw the tree.)

Not the answer you're looking for? Browse other questions tagged syntax syntax-trees or ask your own question.

5
Syntax trees for unaccusatives, unergatives and ergatives verbs (MP) within the split VP framework
2
Where to attach 'of too much cholesterol' while drawing the syntax tree (x-bar theory)
2
Drawing case specified trees for english gerunds