Is there something deeper behind the “verb classes swapping” of the subjunctive endings in Romance languages?

However the Spanish community has not found any answer yet and the phenomenon is observable in many Romance languages. I am wondering it anyone here in the Linguistics community will come with a plausible explanation.

As Comparative Grammar of the Romance Languages says:

To form the subjunctive, verbs normally switch their thematic vowel (a becomes e/i and e/i turns into a) 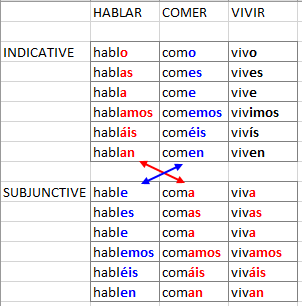 QUESTION: Is it only coincidental, or is there something deeper behind it? Something like "as the subjunctive often expresses uncertainty, let's make the verbs sound weird by deliberately using a wrong set of endings to emphasize that we are not sure"?

Is there any theory about the origin of this particular switch? I am aware that this is inherited from Latin. The question is not about how the Romance languages inherited it. By origin I mean rather an idea behind.

And a bonus question: is anything like this (swapping thematic vowel between tenses/moods) in non-Romance languages?

From 280 of Benjamin W. Fortson's Indo-European Language and Culture:

The Italic subjunctive is not a continuation f the Proto-Indo-European subjunctive, which became a future. There are at least three subjunctive morphemes found in Italic, of which one continues the PIE athematic optative and the other two are of unknown origin.

For the details of how the distribution went you will have to consult various works. The question as to whether this pattern (the Romance pattern) appears elsewhere among I-E languages is answered by this shifting of functions of various morphemes, e.g. subjunctive to future, optative to subjunctive, and so forth. Deep stuff. The upshot is that "swapping" does not properly describe a process that occurred through a long and complex evolution among the I-E languages, although it does make it easier to teach the subjunctive to learners.

This trait is directly inherited from Latin. A verb like laudare has subjunctive forms with an e: laudem, laudes, laudet, lauemus, laudetis, laudent while other verbs form their subjunctive with an a, e.g. vivere has: vivas, vivas, vivat, vivamus, vivatis, vivant.

I got a plausible and quite exhaustive answer here in the Spanish Stackexchange: https://spanish.stackexchange.com/a/16541/11155