A few days ago, we had a conference on multidomination and I firstly saw an andP there. The solution was to simply abandon the conditions of well-formed phrase markers below:

However, this is a brand new hypothesis in syntax, an andP merged two sentences having a structure as below (I made it): 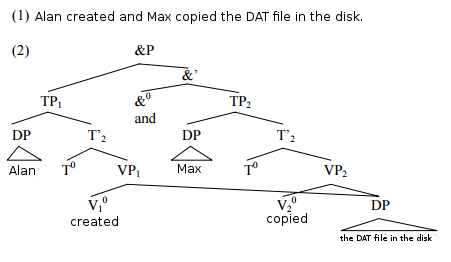 So, I wanted to ask, is there any solution or description to structures as above without violating Nontangling Condition, because this tree structure seems rather odd to me?

A Brief Explanation Why I've Found This Structure Odd

I know trees are just a way of description of syntactic structure in the cognition, however I do not know the limits of this approach. Like [created] just chooses DP dominated by VP2 out of blue, or are there boundaries?

That's why I wanted to know if there are any analyzing of structures like those without abandoning Nontangling Condition.

The description I need should:

I will go on to mention Gazdar's theory of RNR constructions in Unbounded Dependencies and Coordinate Structure, since this is the only account I know of that is in some sense a solution. Gazdar shows how to construct a phrase structure grammar which generates the RNR constructions with rules that will be required in any case for other constructions.

For your example, here is a simplified account of how it works. A finite number of rules are added to describe structures that are missing a constituent. Gazdar uses a slash notation inherited from Categorial Grammar: a sentence missing a noun phrase, for instance, is an S/NP, and a PP missing a NP is a PP/NP. These new categories behave like normal categories in coordinate structures -- you can coordinate two like categories to create a coordinate node of that same category.

For your example, we'd do something like the following. Supposing that for the full versions of "Alex created the DAT file on the disk" and the other sentence, we have these PSRs:

and for coordination of the full sentences:

There is no appeal to transformations or mysterious things going on in "PF".

Your example is an RNR construction (short for "right node raising", which was Paul Postal's term). There is a good Wikipedia article on it, and a good discussion in The Syntactic Phenomena of English by James McCawley, who argues for a structure similar to yours, in that it requires unusual tree structures.

Is there another "solution"? That really depends on what it is supposed to "solve". You'd have to be more explicit. I have a theory about RNR that depends on an unusual definition of "category", but I haven't found a good way to describe RNR'd verb phrases, as in "John was, but Mary wasn't, eating caviar."

Well, I was just looking for information about this and I could't found any example of a tree diagrama that explain coordinated sentences. I thought something similar (the same) to what shows the OP.

So, I think this is possible because the words that regulate case take the same position than C. These words are the verbs and the preposition, which are -N. By far I havent read any classification that takes care of conjuntions, but I'm sure that conjuntions must share that characteristic: to be -N. Then, each o (o1 and o2) could be explained independently.

so I was basically looking for a similar structure to the sentence " John hacked and smashed the box". Yet to learn advanced syntax but can this be an option? 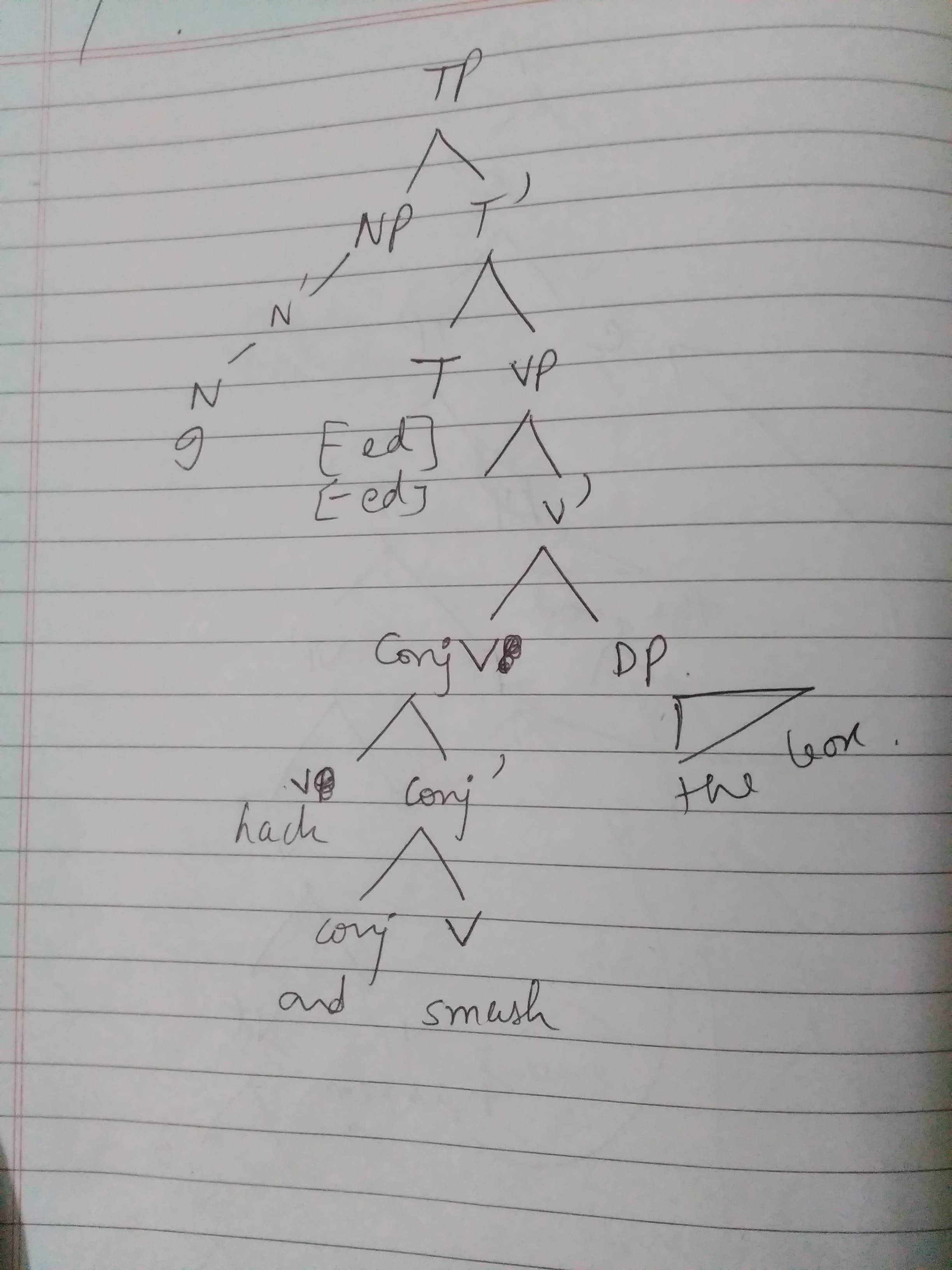 Not the answer you're looking for? Browse other questions tagged syntax syntax-trees generative-grammar principles-and-parameters or ask your own question.

4
Syntax: How can this tree be built?
1
How do I deal with an infinitive verb in a syntax tree?
5
How do you draw a syntax tree for a sentence with a dummy subject?
3
How order of the syntax tree is formally/strictly proven?