On the Predicate Internal Subject Hypothesis and DP Predicates

One question arises when DP predicates are involved. In a sentence such as "this is Mary's watch", the specifier of the DP is occupied by "Mary". 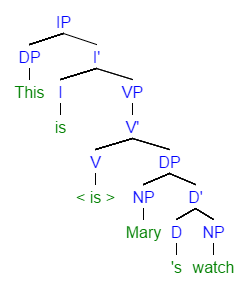 In your example, Mary's watch is not a DP 'predicate', but the second argument of an 'identificational' verb be that expresses identity between its two arguments, not class-membership. Since 'identificational' be is a two-place predicate - not a copula linking a monadic nominal predicate to its subject - its two arguments can be initially projected, under X-bar assumptions, in its 'complement' and 'specifier' position, respectively, which means that the 'XP-internal subject hypothesis' can account for cases like this without the slightest difficulty. You should, instead, have used an example like John is an engineer, where is does express class-membership and an engineer is, indeed, a nominal one-place 'predicate', but note that, in that case, the specifier of D (= a) is empty, and, again, there is no problem whatsoever in initially projecting the eventual subject John in Spec D in case you should want to adopt that analysis. (You need not, though, because there are other, and arguably more attractive, possibilities, such as the 'predication hypothesis' that P Elliott refers to).

The two solutions that I can see are:
A) That such complex DPs have another phrasal constituent which contains them and has a null head. Though this seems a little far-fetched. Or...
B) That the subject originating in spec-AP only applies when it is indeed an AP and not to existentials with a DP. Thus it would presumably be generated in spec-VP.

Apologies for a fairly weak answer but I thought I should contribute as I can.

The subject of the sentence is This in IP,spec. In the DP Mary's watch, Mary specifies the whole DP, ergo she's kinda the subject of this complex DP.

Not the answer you're looking for? Browse other questions tagged grammatical-subject nominals predicatives or ask your own question.

6
How do linguists define the idea of a grammatical subject?
4
The contrast between predicative and ordinary
4
What is the difference between 'actor' and 'subject' in systemic functional grammar?
5
What is the subject of a passive sentence?
2
About the universality of the notion of subject and the description of ergativity
3
Difference between primary and secundary predicates(/argument small clauses) and their (overt) 'heads', and transition/ambiguity between the two