Why are there many different ways to pronounce a phoneme?

A phoneme may be pronounced in different ways, depending on its position in the utterance, and still remain the same phoneme. Why?

So, if two speakers produce two phones, but both map to a single phoneme, an average listener would say these represent the same phoneme.

Note, this mapping is language-specific.

It sounds like you're referring to the concept of allophones. Any difference in pronunciation of an orthographic phoneme should be notated in its IPA transcription. A phoneme can have a variety of allophones, all of which would be represented differently in IPA but would not differ from their shared underlying allophone in lexical meaning. So, for example, [b] and [p] in English are NOT allophones because "but" has a different meaning than "put," however /pʰ/ is an allophone of /p/, because I'm not able to provide you with a minimal pair like I did for [b] & [p]. Lexically, there is no difference between /p/ and /pʰ/-- and the two may likely be represented identically orthographically-- but there is a difference in their pronunciation and, thus, their IPA transcription. I hope this cleared things up?

I thought I would focus on one part of the original question, namely why this variation arises in the first place. The question presuppose that there is some unit that underlies pronunciations (I accept the presupposition).

Using the term "phoneme" to refer to the segment in its underlying form, each phoneme is pronounced (realized, implemented, or whatever term you want to use) with a particular high-level acoustic and articulatory intent. The phonemes /t/ and /d/ in English call for raising the blade of the tongue in a certain manner, and they are distinguished by what happens at the larynx. However, it is extremely difficult to realize a phoneme in a very specific and identical manner in all contexts, owing to various physical forces of speech (articulatory, aerodynamic and acoustic factors). An aspect of articulation that plays a significant role in contextual variability of speech is coarticulation. In uttering the sequences {/ti/, /tu/, /tæ/, /pi/, /pu/, /pæ/}, the motor system faces the problem that in /ti/, there are two uses of connected articulators that have to be carefully orchestrated (involving positioning of the tongue blade), but in /pi/ the articulators for the vowel and consonant constrictions are different, and one does not constrain the other. Consequently in articulating /ti/ there is a physical necessity to adjust the articulations of /t/ and /i/ that does not exist in /pi/.

The linguistic consequence of this is that there is a latent tendency to modify the pronunciation of /t/ in the direction of /i/, when /i/ follows. This tendency becomes linguistically interesting because the motor system only weakly pushes articulation in a particular direction, and speakers have to "decide" exactly how coarticulatory influences are implemented. One approach would be to let tongue raising and fronting for /i/ commence early, resulting in a palatal-sounding consonant [tʲ]. Another is to retard raising and fronting (in order to maintain the details of articulation for /t/), resulting in an initially-retracted vowel [ɨ̆i].

The initial impetus for contextual variation is this necessity of coordinating consecutive articulations in fluent speech. Languages can regulate automatic coarticulation in many ways, and this can lead to historical changes in the high-level acoustic and articulatory intent behind a given segment. So in some (Indic and Bantu) languages, the original goal of producing breathy voicing as a distinctive property of stops has been modified, to the point of becoming the goal of producing distinctive L tone on a following vowel. The interesting but unanswered question is, what causes languages to respond differently to that initial physical impetus? That is, why aren't allophonic rules the same in all languages?

Since phonemes differ from one another in many ways, and because listeners usually have a good idea in advance what sort of thing will be said to them, speakers don't need to pronounce a phoneme is in exactly the same way each time, in order for listeners to figure out which phoneme is intended. So speakers are free to substitute a sound which, in context, is easier to say or will be heard more readily.

It's because the notion of a phoneme is a theoretical abstraction over actual speech production. Nobody ever pronounces Eg /b/ in exactly the same way twice. But we still (somehow) manage to recognize [b] when we hear it, in all its many guises.

The phoneme concept has been offered by some at least as the the one undeniably scientific deliverance of modern "scientific" linguistics. Unfortunately there is no empirical evidence for it. It's undeniably a useful fiction, but it is a fiction, which is closely tied to literacy (would we even imagine a [b] if it were not represented in our written language)? For more on this search on Robert Port http://www.cs.indiana.edu/~port/pubs.html

The following is based on this helpful website that I edited for readability. 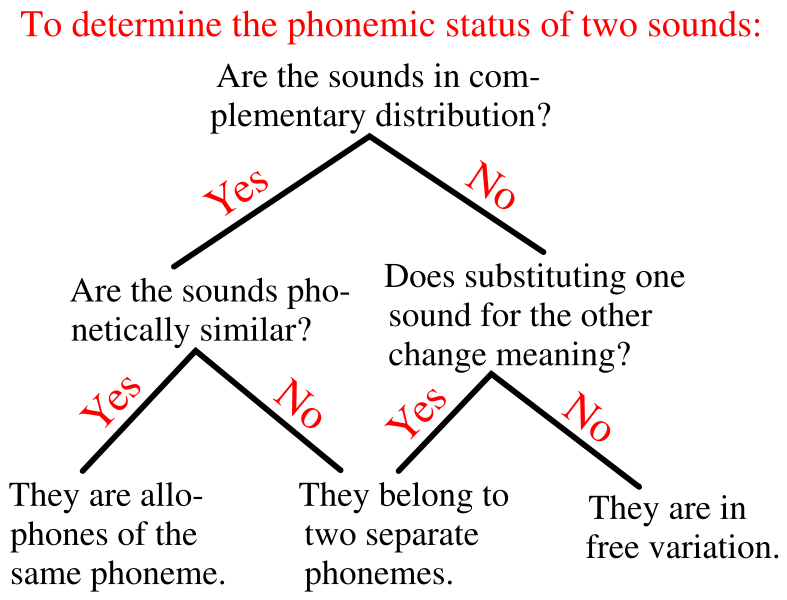 This post will clearly define and exemplify several terms in phonetics which are often confused: phoneme, sound, allophone, and phone.

Phoneme (Gr. phone “sound, voice”) is the smallest contrastive unit of language that may change the meaning of a morpheme and, as a pursuant, a word.

From 1-3 overhead, the distinction between /p/ – /b/, /e/ – /æ/, and /s/ – /θ/ creates new words in English, which means that English has such phonemes as /p/, /b/, /e/, /æ/, /s/, /θ/ (among other English phonemes). When linguists construct phonological system of a language (let’s say the language of a tribe), they try to find pairs of words in which the distinction is as small as in the words above. If such a pair is found, then it means that this language has such phonemes. Let us consider one more example, in Russian this time:

In this pair the only difference between two words is /l/ – /ɫ/, that is, soft /l/ vs hard /ɫ/. As example 4 shows, in Russian, there are two distinctive phonemes /l/ – /ɫ/ since they change the meaning of the word (via the root morpheme). However, in English, there is no phoneme /ɫ/ since it does not serve the purpose of distinguishing words or morphemes. For example, whether we pronounce [lamp] or [ɫamp], it does not change the meaning; therefore, it is not a phoneme in English. In contrast, in Russian, there is no pair of words which would be distinguished based on the /e/ – /æ/ opposition (example 2 above); therefore, /æ/ is not a phoneme in Russian.

Sound (= phone) is a vibration or wave caused by an object.

This definition comes from acoustics and underlines physical characteristics of sounds of speech. Sounds are instances of phonemes in real speech. Put it simply, sounds are everything we hear with our ears. Here are some examples of sounds:

In dictionary transcriptions, we have sounds, not phonemes. Sounds are physical segments. Sounds, unlike phonemes, have such concrete characteristics as duration in time and loudness. Sounds are produced by organs of speech. Sounds are quite concrete and linguists consider them to be units of speech; while phonemes are abstract (they are generalizations made on the basis of comparison of words) and linguists consider them to be units of language (cf Saussurian distinction langue – parole). Sometimes, in non-linguistic circles, the word “sound” is used to name what is, in fact, a phoneme.

Allophone (Gr. allos “other” and phone “sound, voice”) is a variant of a phoneme.

Allophones are different pronunciations of words which don't change the meaning of these words. Consider the following allophones:

Whether we (or a foreigner) pronounce [pin] or [pʰin], [spin] or [spʰin]; [li:n] or [ɫi:n], [fil] or [fiɫ], it does not really change the meaning in English. Therefore, we are dealing not with phonemes, but with allophones.

Allophones can be of three types (Kocherhan, 2006, p. 158):
a) individual (e.g. a foreigner or a person with a speech disorder cannot pronounce [p] correctly);
b) territorial (e.g. when in some part of a country [p] is always pronounced as [pʰ]); and
c) positional (e.g. [l] at the end of words is usually pronounced as [ɫ]).

*/Slashes/ are usually used for phonemes and [square brackets] for sounds.

6
What languages have a three-way vowel distinction with backness?

6
Are there languages in which two or all three of /χ/, /x/, and /ç/ are opposed as distinct phonemes?
9
Definition(s) of phoneme
26
American English : are [ə] and [ʌ] different phonemes? (schwa vs. chevron)
3
Phoneme or allophone in two variations of same word?
1
can two phonemes of two different allophone appear in one word?
5
Why do so many languages have both an alveolar "light L" [l] and a velarized "dark L" [ɫ] allophone?
0
Why are phonemic transcriptions necessary, when phonetic transcriptions are more detailed (and more helpful for language learners)?
1
Is the distinction between phoneme and allophone useful in language learning?