I know that for wh-movement out of a non-root CP successive cyclic movement is needed, so moving to spec-CP of the lower CP and then from there to the root-CP, but what's the specific restriction on wh-movement which leads to this requirement?

At any point in the derivation, the range of visible syntactic objects available for computations (e.g. Agreement) is restricted. Remember, SMT assumes that derivations form interface-interpretable objects as efficiently and lazily as possible. Thus, we assume visibility is restricted to phase (CP and vP) edges, which rules out one fell swoop movement. This is known as the Phase Impenetrability Condition.

The following data comes from McCloskey 2000. In a dialect of English spoken in Ulster, the quantifier all can attach to wh-pronouns.

Where all did you go yesterday?

Who all did you invite to the party?

What all did you eat for breakfast?

all can be stranded

Where did you go all yesterday?

Who did you invite all to the party?

What did you eat all for breakfast?

So it would seem that after [DP where/who/what all] merges in its theta position, wh-extraction can target only the wh-pronoun.

Turning to long-distance wh-extraction, the following are all grammatical.

Who did he say that he met all?

Who did he say all that he met?

Who all did he say that he met?

Thus, it is possible to strand the quantifier in intermediate Spec, CP. This lends support to the cyclicity of wh-movement shown here. Angled brackets indicate lower copies. 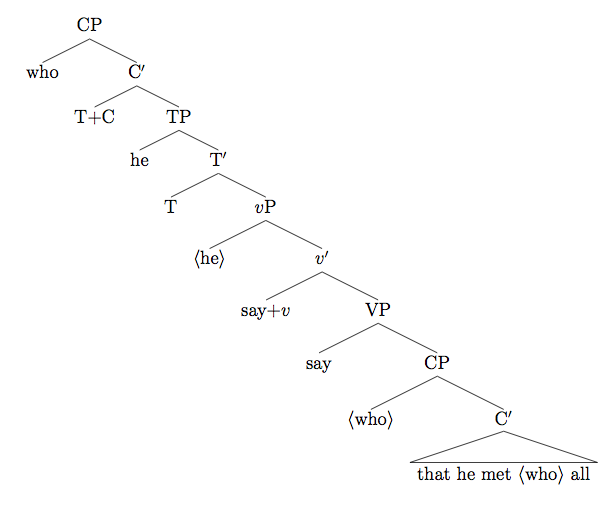 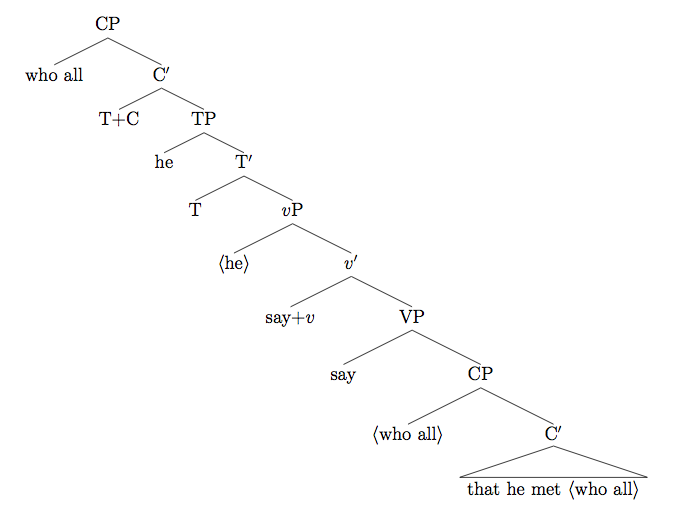 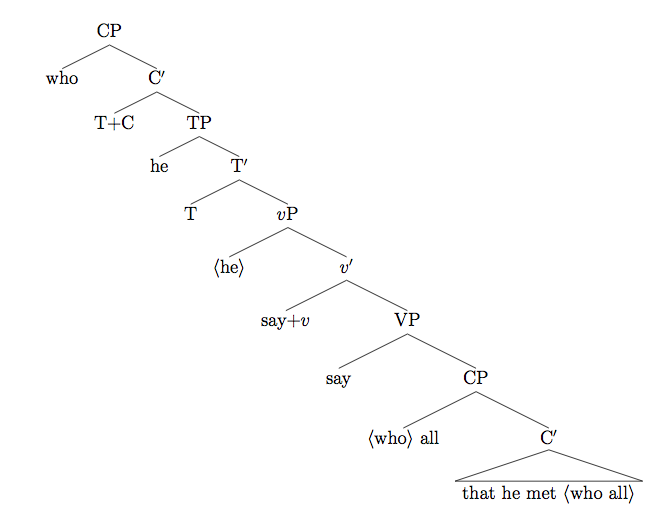 Assuming the copy theory of movement, cyclic wh-movement is further supported by languages in which multiple wh-copies are pronounced. Consider the following Afrikaans data from du Plessis 1977

'Whom did you say again that Sarie think Jan is going to marry?'

Not the answer you're looking for? Browse other questions tagged syntax x-bar-theory movement principles-and-parameters or ask your own question.

11
Why are affix hopping and head movement considered as distinct operations?
1
Head to head movement
1
Is v-spec Specific for agent? If so, How to Solve This Problem?
3
Syntax: VP subject internal null V head from Carnie's book
4
Is the V-T movement possible in English?
4
How do contractions work in syntactic movement?
1
How do movement-based theories account for extraposition?
1
Floating quantifiers in X-bar theory: “the men all have gone”