What part of speech is “as their native”?

The number of people who speak English as their native language will decline.

what part of speech is as their native?

The number of people who speak English as their native language will decline.

As @user6726 already said, you can not assign the phrase a POS, because "part of speech" refers to single words which as their native language isn't. 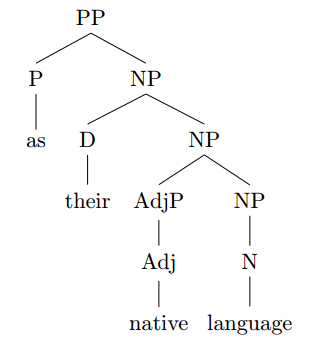 as is a preposition, their functions as a determiner (its POS would be a possessive pronoun), native is an adjective and language a simple noun.

You can however not assign a category to as their native like you wrote, because this is not a constituent: You can not separatedly group the words together like this.

If you don't find this so intuitive, you could also think about grouping all words that somehow belong together into brackets:

All the words could be "groups" on their own, their native language forms a group next to as, native language is a group and the whole phrase is one as well, but you will find no pair of brackets that contains exactly as their native: It is not a constituent, this combination of words is not a separable phrase. You'd need to include the noun language as well or narrow it down, saying e.g. that as is a preposition.

1 as can also be used as an adverb, as in My house is not AS big as yours; however, as @PaulM and @Araucaria pointed out, adverbs don't take (NP) complements, so the use here must be prepositional.
Thanks for correcting me.

Syntacticians generally identify syntactic categories, or parts of speech, by checking out "privileges of occurrence". We compare other phrases with similar senses that could be substituted. Here, we could substitute for "as their native language" such phrases as "natively", "fluently", "in a fluent manner", and so on. This makes it evident that it is a manner adverb. For describing manner adverbs as V-bar modifiers, please see McCawley's discussion.

The idea that we use "part of speech" only to classify single words and not also phrases, expressed by several other commenters, might have been true long ago, for the ancient Greeks, but is no longer so. Times change.

Not the answer you're looking for? Browse other questions tagged english grammar parts-of-speech phrases or ask your own question.