Ask Question
Asked 6 years, 3 months ago
Modified 6 years ago
Viewed 13k times
4
Closed. This question is off-topic. It is not currently accepting answers.

Questions requesting to make syntax trees are not within the scope defined in the help center. For any doubt, please ask on Meta.

When I draw the syntactic tree of a sentence with "not", what kind of component would the "not" be?

Jane did not go to school

Totally depends on your syntax theory.

Some prefer to do it with a NegP, as suggested bei @eijen: 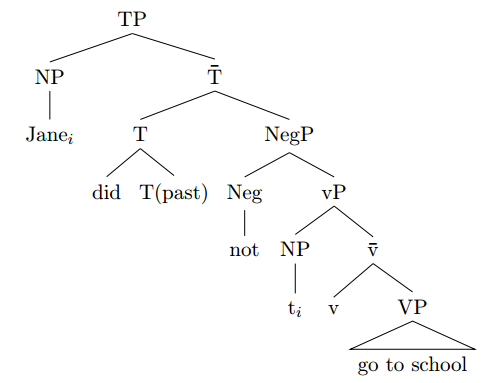 Others assume the negation to be in I: 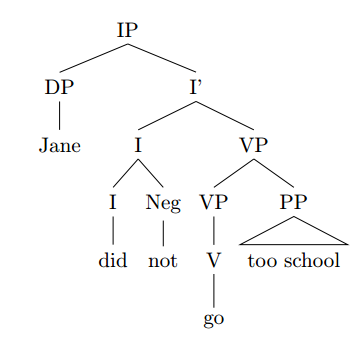 And then again you could see negation as an adverb modifying the VP, as suggested by @BillJ: 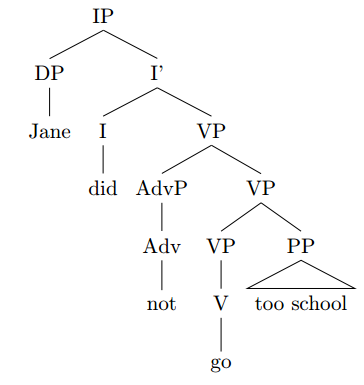 There really isn't a uniform answer, because that depends so much on your syntax theory (already whether you assume that there is something like TP and little v, go with I instead, maybe something even different, ...), so you'd need to specify what framework you are in.

Logically, "not" is a sentential adverb. Grammatically, in English, it is an auxiliary verb suffix. The disparity between its logic and its grammar explains why it is so difficult to classify, especially for those grammarians who cannot distinguish logic from grammar.

A grammatical modifier is an element which when added to something of a certain grammatical category gives a new element of that same category. In logic, negation and the modal operators are treated as being added to sentences (or, that is, propositions) to create new sentences. If p is a sentence, then ~p is also a sentence. Although logicians don't use this terminology (they generally call ~, Nec, etc. "operators"), this makes negation a grammatical modifier. Grammarians generally call modifiers of nouns "adjectives" and other modifiers "adverbs", so it is reasonable (though vague) to call "not" an adverb, judging from its logic, since it modifies something other than a noun (viz., a sentence).

In English grammar, though negative "never" can reasonably be classified as sentential adverb, comparable to "possibly" or "maybe", "not" itself is not at all a grammatical adverb. Instead, it is suffixed to a finite auxiliary verb like "is", "can", "does", to create a new finite auxiliary verb ("isn't", "cannot", "doesn't", and so on).

5
the difference between upward and downward entailment
4
What software is used to make these X-bar trees?

2
Syntactic representation of Across-the-board Extraction
1
Why do you wonder who was dismissed? (Complementizer position)
2
Is there a grammar of syntax that takes into account inherent syntactic ambiguity in natural languages?
0
Drawing a phrasal constituent tree for a specific sentence