Has a Dravido-Australic superfamily been proposed?

There seem to be striking typological similarities between Dravidian and Australian languages (see, e.g., the answers to this question Are there languages with the three-fold articulation place contrast dental–alveolar–retroflex?). There are also genetic studies suggesting an Indian migration to Australia 4000 years ago (see http://www.bbc.com/news/science-environment-21016700).

Is there an attested historical linguistic link between languages of India and Australian languages?

But as commenter @TKR points out, the comparison of the present-day languages, whether of phonological inventories or the grammar, are not useful as evidence of ancient connections as they would have changed substantially since that time.

As for the Indian connection of 4000 years ago, that was a finding in one genetic study, others have had different results, including a divergence between Australian and South Asian Y chomosomes of around 54,000BP. And of course Indians have been present in SE Asia for over 1,500 years, while over the last few centuries there has been regular contact between peoples of SE Asia (Macassans in particular) and Australia, so an Indian genetic link could have been brought to Australia that way. But even if an Indian genetic link was substantiated, evidence about a linguistic link is a quite separate matter.

To summarise, a Dravido-Australic language superfamily has not been proposed because there is, at present, no evidence of such a connection.

No research is being done as we know but an Australian substratum in Dravidian is a very intriguing area of research awaiting some dedicated researchers.

I did some amateur research into similarities between Eurasiatic and Australian as well as Trans-New-Guinean. There is some similarity in numerals for one, two, five and ten (ten usually has part meaning "two" and five often means "palm" or "one palm"): 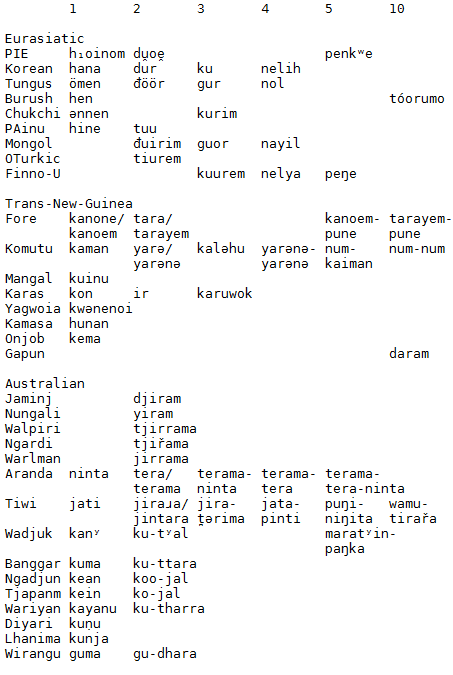 Besides this, there is a striking similarity in the words for fire, but this hypothesis should be rejected because the word for fire in Australian is known to originate from the word for wood.

Dravidian is often considered Nostratic, one of the closest relatives of Eurasiatic, but I know no similarities between them except the numeral for four (nāl in Proto-Dravidian). In my opinion, this can be a borrowing. There is no similar numeral attested in Australian.

I also have seen claims that Australian and Indo-Pacific (including Trans-New Guinean) are "Eurasian" languages (whatever it means in the author's terminology) as opposed to Austric family from the same region.

So, to sum it up, if Australian and Dravidian are related, I would guess, they are more likely related via Eurasiatic than directly.

Not the answer you're looking for? Browse other questions tagged historical-linguistics dravidian australian-languages or ask your own question.

3
Are there languages with the three-fold articulation place contrast dental–alveolar–retroflex?

9
How the tau gallicum may have been pronounced?
3
Have there been any significant attempts to map the evolution of English?
5
Which Non-Pama-Nyungan Australian language has the most speakers?
7
Has grammatical gender ever been observed to emerge in a language that previously had none?
8
Proposed binary divisions of Proto-Indo-European
1
Has it been argued that linguistics could only have arisen after exposure to foreign languages?
6
To what extent has Middle Chinese been reconstructed?
3
Is most of the world's languages being in a small number of families a recent development? Or has there always been cycles of linguistic expansion?