In Geoff Pullum's recent post Being an Auxiliary on the Lingua Franca blog, he states that the sense of "have" as an auxiliary (forming the perfect tense) evolved from the possession sense, "but the speciation that separated them took place half a millennium ago".

This struck me as much too recent, given that an almost identical perfect construction exists not only in most (all?) other Germanic languages, but also in the Romance languages (with the exception of Portuguese?). But, sure enough, the OED says that this evolution "to some extent parallels developments in other Germanic and Romance languages, but appears at least partly to reflect development within English". (On the other hand, it also says "This development appears to have largely taken place before the written record.")

Assuming that it indeed happened within the last half millennium or so, how can this kind of fundamental language change occur in parallel between a dozen or so languages dispersed over a continent (from Iceland to Romania)? Did the innovation occur in one region and then spread between languages (like a new vocabulary item might), or is it better to think of it as a natural development that came about independently in multiple language communities (like simplification of noun inflection)?

Areal features develop when languages from different groups or branches are in contact with each other. There are a few main mechanisms - common substrate, common superstrate, parallel development.

About the feature in question:

The use of have, haben, avoir, avere etc as an auxiliary for the past tense is an example of an areal feature. The areas where languages use this auxiliary correspond roughly to former Celtic-speaking areas and to those where language was heavily influenced by Vulgar Latin, including deep in the Balkans. I will not speculate on the ultimate source and exact mechanism here.

Danish, Dutch, French, German and Italian represent a transitional zone, where to be is the auxiliary for intransitive verbs, and to have for others. Old Spanish and Middle English had this distinction too, which is to say this feature's area was still evolving in recent centuries - across language families.

It is not common unbroken Indo-European legacy - Latin habere and Germanic haben are not actually cognates, and classical Latin and Greek made little use of auxiliaries anyway. Many Indo-European languages outside of Western Europe - Armenian, Iranian languages, Slavic languages beside Macedonian - use the copula as an auxiliary, but most do not use any translation or cognate of habere or haben as an auxiliary for the past tense. 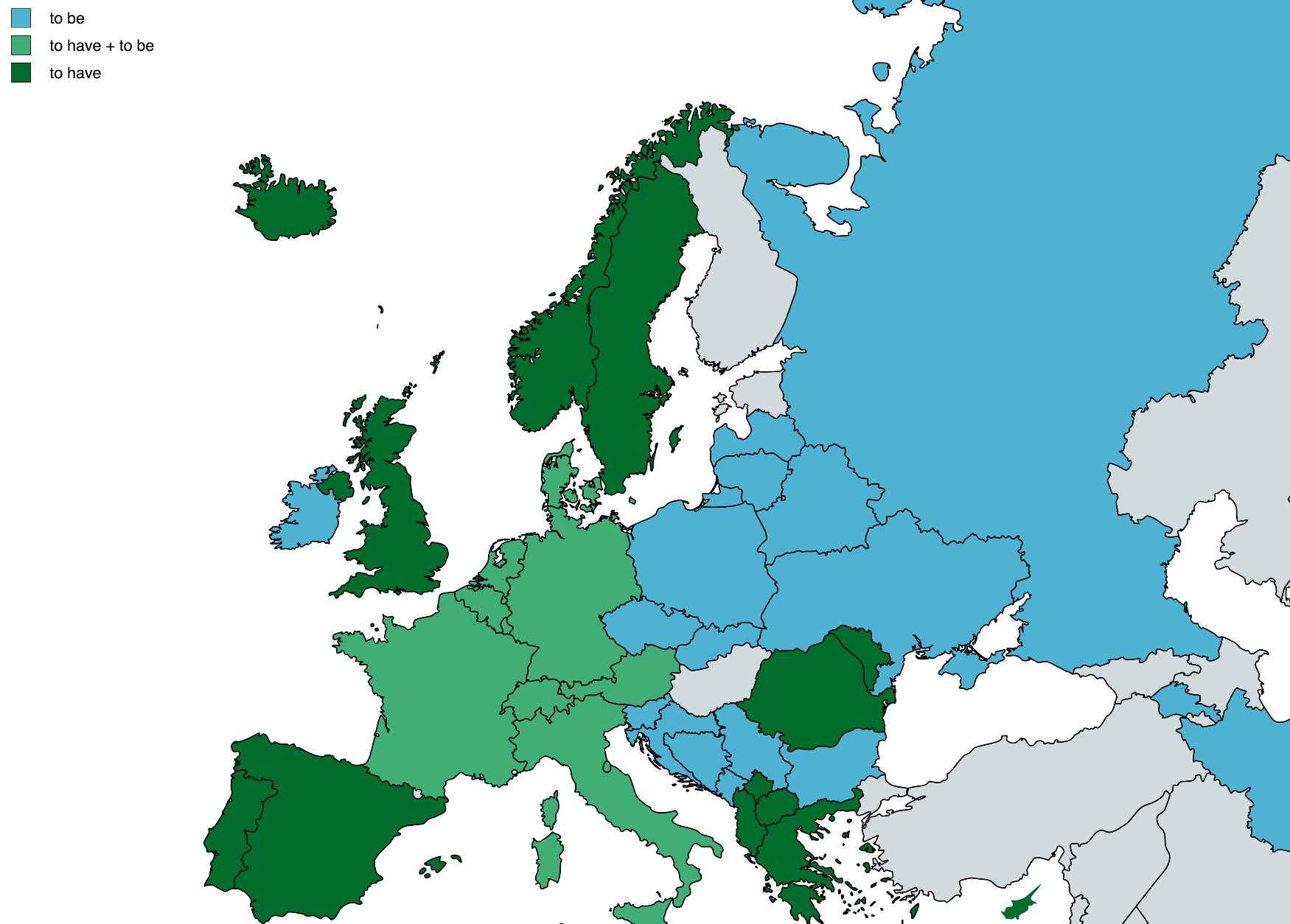 [Pardon the seeming equation of languages with current political entities]

Not the answer you're looking for? Browse other questions tagged historical-linguistics or ask your own question.

31
Is it unusual that English uses possessive for past tense?
3
Do Germanic words have Romance qualities and vice-versa?