zh sound with a flat tongue?

This is from the Wikipedia article on retroflex consonant, but isn't this wrong? I assume that Mandarin zh, ch, sh, and r sound should be pronounced with your tongue curled up, rather than "flat?"

These consonants are traditionally described as "retroflex" ("bent backwards"), meaning the tongue tip curls back towards the throat. However, Ladefoged & Wu (1984) (also discussed on Ladefoged & Maddieson (1996)) have carefully studied X-ray photographs of native Mandarin speakers, and showed conclusively that they're produced with a retracted tongue blade, either flat or a little bit convex, with no curling back of the tongue tip: 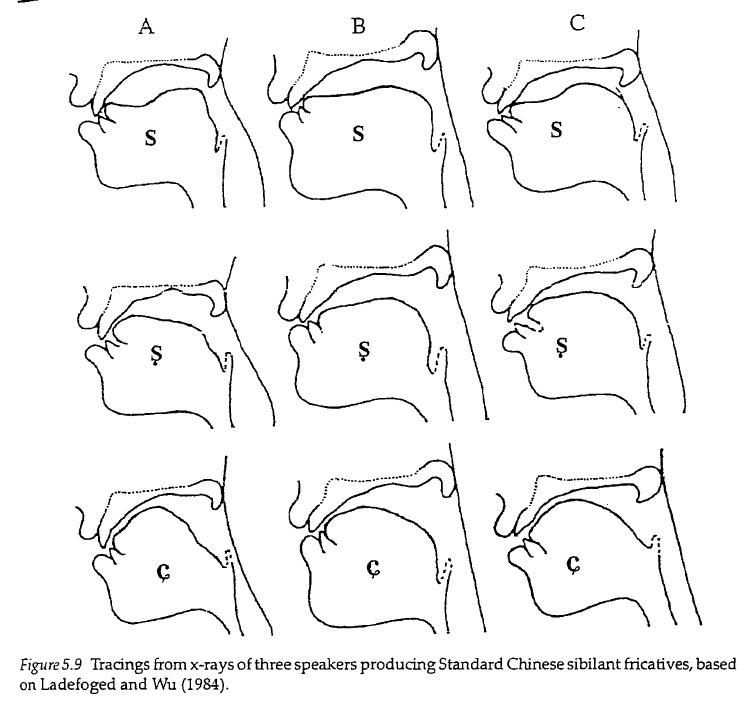 The Standard Chinese so-called retroflex ṣ [=pinyin 'sh'] is shown in the middle row […] This gesture is plainly very different from that in the retroflex stops discussed in chapter 2. It does not involve the tip of the tongue being curled up and backwards into the palatal region, as in the Dravidian sub-apical retroflex stops, nor does it have the apical post-alveolar shape that occurs in the Hindi retroflex stops shown in figure 2.11. In our Standard Chinese data, all three speakers produce the constriction for this sound with the upper surface of the tip of the tongue, making it a laminal rather than an apical post-alveolar. The constriction is at about the same place for all three speakers, further back than in s, so that it is nearer to the center of the alveolar ridge. Both the height and the width of the channel are greater than in s, but the width varies considerably, from 18.5 mm for speaker A to 5 mm for speaker C. The location and width of the constriction are thus very comparable with those for English ʃ. The front of the tongue is fairly flat for speakers A and C, and slightly hollowed for speaker B, rather than being slightly raised towards the hard palate as it is in ʃ. Because the part of the tongue immediately behind the constriction is not domed as it is for ʃ, we have termed this sound a flat post-alveolar sibilant. A further point to note about this gesture is that no part of the tongue is touching the lower teeth, as occurs in the articulation of s. Instead the tongue is drawn slightly back, so that there is a sublingual cavity. Perkell, Boyce and Stevens (1979) have shown that a cavity of this type has a significant acoustic effect, producing a comparatively low frequency spectral peak. Additional x-ray data in other publications (Zhou and Wu 1963, Ohnesorg and Svarny 1955) all show substantially the same gesture, confirming the notion that Standard Chinese ṣ is a (laminal) flat post-alveolar sibilant. The traditional description of this sound as a retroflex is inappropriate as a description of its articulation.

Perhaps the “retroflex” misnomer comes from early Orientalists who thought these consonants sounded similar to the Sanskrit retroflex series.

Not the answer you're looking for? Browse other questions tagged phonetics chinese articulation or ask your own question.

12
Why are /t/ and /d/ sometimes affricated before /ɹ/ in English?
2
What transcription to reflect Hebrew script and phonetics?
1
What is the difference between an alveolar trill and a syllabic alveolar trill?
0
Do languages with long clusters have minimal vowel or consonant inventories?
2
"Phonemic" distinctions induced by morphology
5
Does the primary distinction of retroflex consonants lie in their effect on surrounding phonemes?
5
Why do so many languages have both an alveolar "light L" [l] and a velarized "dark L" [ɫ] allophone?
0
Are alveolo-palatal consonants more likely to be followed by high vowels, whereas retroflex consonants are more likely followed by low vowels?