How to identify a foreign language from handwriting?

As asking language-ID-questions on this site seems off-topic I'd like to know whether there is a resource on the internet which can help me.

I found a the curious snippet attached to a balloon which has landed in a forest nearby my parents home in Berlin/Germany. I think I could start to translate it, once knowing which language it is and thus the alphabet.

This is just one line of the text - I don't want to post all of it as I'm not sure whether the author would want that. It is also to be noted that the snippet is signed with two names written in latin characters and using the word and.

I found this diagram (in Russian). It seems to be pretty simple, and it amazingly covers a vast majority of world's languages. I took my liberty to adjust it slightly. 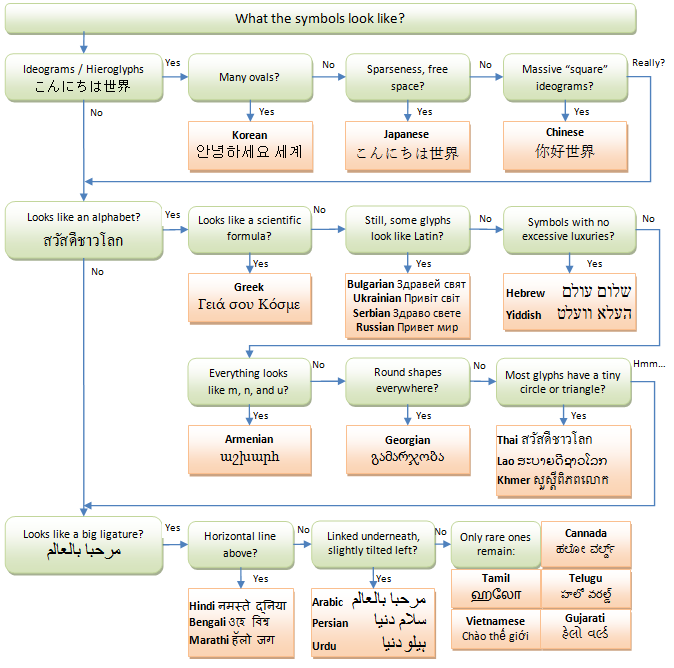 Note: this diagram does not pretend to be scientific at all. Its only goal is to let a beginner to quickly identify the script and, possibly, a language.

Once you have recognized the language/script, you would probably need to identify the characters within the text. Some characters can be difficult to recognize.

For example, in Thai language (your text is in Thai; see below), the characters ง, ว, า, and อ, being hand-written, may be hard to tell apart since they differ drastically from their canonical forms.

The question Deciphering a handwritten script also has a great answer by a person whose profession is reading manuscripts; in their answer, they describe some practical techniques for recognizing symbols in a handwritten text.

P.S. Your sample is in Thai, and the inscription says, อย่างนี้ตลอดไป รักเสมอ, "{wish it to be} forever this way, an eternal love". Also, it's a pretty common tradition in Thailand to attach one's dreams and wishes to a ballon or a floating basket and let it fly/float.

If it were printed, I would suggest Omniglot, which is the best resource for alphabet-identification. Handwritten text is more of a problem: the first time I saw cursive Hebrew, I didn't know what language it was. And there's always the possibility that it isn't a language, like this.

Not the answer you're looking for? Browse other questions tagged reference-request written-language writing-systems language-identification or ask your own question.

23
Deciphering a handwritten script
1
How do I go about deciphering the language of an inscription on an old heirloom?

7
Which branch of linguistics studies handwriting?
3
Please help me identify this language (w/ image)
7
Can native signers of one sign language identify other sign languages?