Which nodes are meant by 'the specifier of a null active V' and 'this VP'?

To put some teeth to this claim then, we might propose that external arguments in actives are in fact generated in [1.] the specifier of a null active V head low in the tree [End of 1.]: 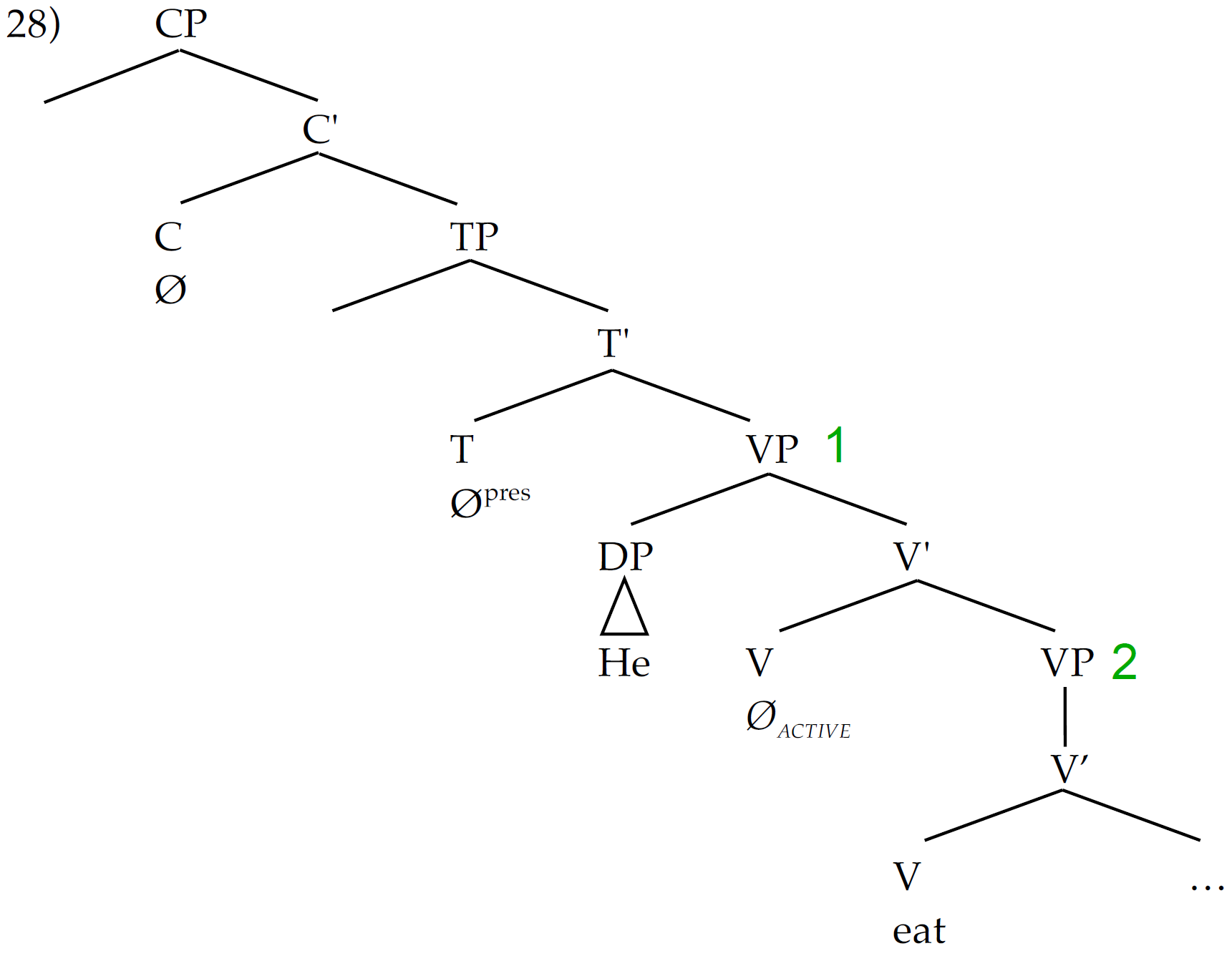 When there is a passive, nothing is generated in [2.] the specifier of this VP. [End of 2.]

The only VP specifier in the tree is the DP he, since that one is a sister to V', of which a "null active V" is the head, and also the DP machtes the requirement of being an "external argument in actives", because that one is the subject and therefore the external argument of the active VP.
The second VP doesn't have a specifier.
The first sentence refers to "the specifier of a null active V", which must be he since the null V is the head of the VP you numbered as 1 of which the specifier is he.
The second sentence says >this< VP, which sounds like it refers to the same VP as the sentence before.
Therefore, I can't think of any other possibility than both 1 and 2 referring to the DP he as the specifier of the VP you numbered as 1, with the null V as the head.
They don't need to refer to different ones just because 1 says it's the specifier of the V HEAD and the other of the V PHRASE - specifiers always relate to phrases, so it doesn't make a difference whether you call it the speifier of the phrase (which is syntactically a bit more accurate) or the specifier of the head (which might make it clearer what exact phrase is meant, since here you can make use of the terminal node's names, like in this example where you can disambiguate between VP 1 and VP 2 by referring to either the empty head or the eat head), but I see no possibility of this (admittedly confusing) wording being meant as referring to the - non-existing - specifier of the VP 2, and both sentences do refer to some V-related specifier, so it can only be the DP he.

I suspect that the internal VP structure that Carnie presents in (28) corresponds to an early 1990's analysis of the 'event structure' of active VPs according to which such verbs contain an abstract ('do-like') 'active' component which is absent in the case of verbs describing non-agentive events (e.g., 'processes' like rain, bare 'change of state' verbs like die, or non-active 'accomplishment' verbs like reach in reach the summit, etc.).

The basic idea is that the Agent of active verbs like eat is projected as a specifier of that [ACT] V head (i.e., under VP1) - instead of as a specifier of eat itself (under VP2) - or, more intuitively, that eat is the surface manifestation of a complex predicate meaning 'do eat' or 'perform an eating act'.

Although that analysis immediately raises difficult theoretical questions like what, then, if anything, occupies the specifier of eat under VP2, or, if he is indeed first projected as the Spec of eat under VP2, what kind of thematic role it receives from eat and how can it subsequently raise into the specifier of the 'do-like' V under VP1 and receive a second? theta role (i.e., that of Agent) there, and why is that compatible with the Theta Criterion, etc., the fact is that there is some empirical evidence in support of that analysis.

Pairs like * What you didn't was educate your son properly vs. What you did´t do was educate your son properly show that there is a do verb 'hidden' under active verbs that is different from the 'dummy' do auxiliary and shows up only in such contexts. The fact that non-agentive verbs like die, see, etc. cannot be used in that construction (cf. * What he didn´t do was die/see the accident) suggests that they do not 'contain' such a hidden 'active' do verb and therefore lends support to abstract analyses like Carnie's (initially due to Hale & Keyser, if I remember correctly, but very popular in the late 1990's; see e.g. Malka Rappaport Hovav & Beth Levin's influential 1998 paper 'Building Verb Meanings').

Not the answer you're looking for? Browse other questions tagged syntax syntax-trees or ask your own question.

9
What are the different ways in which languages express the notion of passivity?
1
Why must an AdvP have at least one AdvP as a Daughter Node?
0
How is there 'no node that c-commands B that A also c-commands'?
0
Why cannot the verb 'consider' theta-mark 'Frederick' as the Theme?
0
What would be included when asked to point out which nodes are immediatly contained in a syntactic tree?
0
“in relation to which” - what type of subordinated clause and is this conjunction somehow distinct?
2
What is the relation between a specifier and a determiner?