The Inflectional Phrase and Welsh

Wikipedia explains how the Inflectional Phrase has a VP as its complement and an NP (the subject of the phrase) as its specifier. It is long ago that I studied this, but a quick look at Sprachliches Wissen by Grewendorf confirms it. And the analysis works alright for many languages.

Either way, I would love to see some syntax trees of entire sentences for Welsh and maybe other VSO languages.

I googled for Joan Bresnan which @Atamiri mentioned in the comment and think I've found the analysis that he/she was mentioning and should be what you are looking for.

According to Bresnan (1997), just as Atamiri described, the finite auxiliary naeth is in I, the head of IP, while the infinite VP brynu car and the DP a dyn combine to the complement of I, labelled S.
As far as I understood it from quickly skimming the article, this DP + VP constituent constitutes a so-called mixed category, a "construction in which a single word heads a phrase which is a syntactic hybrid of two different category types" (Bresnan (1997: 2)).

Adapted from the example in (27), the phrase structure tree for your sentence should look something like this: 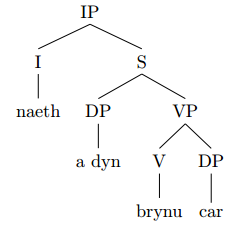 Bresnan (1998: 13) further explains that "S is univerally available as an exocentric category having no fixed categorial head and projecting no higher category. [...] Configurational S consists of a subject constituent and an XP predicate. [...] A configurational 'internal-subject' language (e.g. Welsh [...]) would have S under IP, and VP under S."
Assuming additional X' levels for the XPs, but without specifiers, the tree would look like this, along the lines of Bresnan (1998), (11): 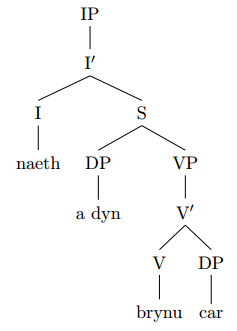 Not the answer you're looking for? Browse other questions tagged syntax inflection generative-grammar welsh or ask your own question.

4
Where is Welsh on the analytic/synthetic spectrum?
2
What kind of pluralisation system does Welsh use?
1
Classification of Relative Clauses in English
0
Why does *h* have two different names in Welsh?
1
stem classes and the terms "fusional" / "inflectional"
0
CGEL's argument on the constituent structure of certain sentences that involve 'as well as'
3
Can we parse the hell out of this construction?
8
What does 6 represent in Medieval Welsh?
1
Is Welsh an agglutinative language?
1
Is Welsh an isolating, an inflectional or an agglutinative language?