Examples of isomorphism in linguistics?

I've read the definition (more than one, actually) but I'm not sure I understand what isomorphism is exactly. I'd be grateful for a simple explanation or some suggestions for a recommended reading on that topic.

I'll reject the mentioned Kurylowicz definition as a rather specific interpretation and make the definition a more general one as "having the same structure".

I think that in linguistics, the term isomorphism is used in quite different ways, I'll make an attempt to account for each of them:

1) Isomorphism can exist between different levels of linguistic analysis.

For example, the notion of allophones (sounds that have a different form, possibly different occurrence contexts, but make no difference in meaning) is similar to the one of lexical synonyms (two words that hava a different form but the same meaning, even though they may belong to e.g. different registers) and the one of syntactic paraphrases (two expressions that have a different form but the same meaning, not excluding the possibility that one may be preferred over the other, as long as they contribute to the same meaning).
Or the difference between a phone (a sound in terms of its physical properties, e.g. [ʁ] or [z]) and a phoneme (an abstraction over phones which occur in the same contexts, e.g. /ʁ/ with allophones [ʁ], [ʀ] and [r] in German) is similar to the difference between a word form (like sleep, sleeps, slept) and its lemma (an abstraction over all forma a word may take, sleep), and possibly even the semantic notion of extension (the referential meaning of an expression with respect to a certain utterance situation) vs. intension (an abstraction over all references an expression may denote, the "idea" that is behind an expression rather than its look in a concrete use).
Or the distinction between predicates (love(x,y), red(x), man(x)) and operators (∧, → , ∃, ...) in semantics corresponds (sometimes) to the difference between lexical categories (nouns, verbs, adjectives) and functional categories (D, C, I, ...) in syntax.
Or, to quote The free dictionary1: "for example, the hierarchical sequence of such types of phonic units as the distinctive feature, the phoneme, the syllable, and the phonological word is structurally analogous to the sequence of such semantic units as the seme, the sememe, the onomateme, and the sentence."

2) Isomorphism can exist between the syntactic and the semantic structure of expressions. (Note that "syntactic" can also mean "morphological" here, possibly even "phonological" when it comes to the structural hierarchy of a word).

For example, the phrase old men and women is structurally ambiguous between two readings:

The issue is with the scope of the modifier "old", which can either have scope over the whole NP men and women or only over men. The surface syntactic structure corresponds directly to the semantic structure: Depending on the grammartical hierarchy between the constituents, the phrase receives a corresponding meaning interpretation. A syntax tree (with NP, AP, ...) would be hiearched the same as a "semantics tree".

This works not only on the sentence-syntactic, but also the morphological level:

masquerade ball for vampires vs. ball with vampire masquerades

In contrast, the following ambiguity is not isomorphic between syntactic and semantic structure:

Every child sings a song

As you can see, the two readings have two different logical forms or semantic structures.
However, on the surface syntactic level, both sentences are structured the same way - in both interpretations, the grammatical subject stays the subject and the object the object: 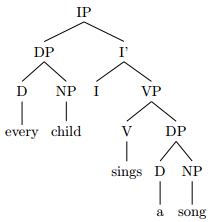 One grammatical structure corresponds to two semantic interpretations.
The syntax and the semantics are not isomorphic here.

3) Isomorphism as a "biunique mapping between form and meaning", to come back to Kurylowicz, taking the definition form here2: p. 18. "Form" is here to be understood as "phonic aspects" and "meaning" as "semantic aspects", to use the wording from the comment.

Isomoprhism in this sense would mean a 1:1 correlation between form and meaning and is, for example, violated by homonymy (one form, several meanings) and synonymy (several forms, one meaning) on the lexical level as well as structural ambiguity (one surface form, several possible interpretations) and paraphrase (different surface forms, one meaning) on the syntactic level.

Partee et. al. (2012: 203) "Japanese and Korean are sometimes said to be isomorphic with respect to syntactic structure, a claim which would be true if the two languages differed in their morphemes but sentence could be put into morpheme-by-morpheme correspondence preserving syntactic configutations and permitting the same syntactic operations."3 Unfortunately, I don't know enough about Japanese and Korean to go into detail about this statement, but I think the idea should be clear.

The same page provides another nice, though non-linguistic example which may help you understand the meaning better: "For example, a paper pattern for a dress may be said to be isomorphic to the cut-out cloth with respect to the size and shape; they differ only in their material."3

It seems to me that the definition of "isomorphism" is too general to not have very different possible interpretations in linguistics, but I hope I caputured the four major ones.

Not the answer you're looking for? Browse other questions tagged terminology or ask your own question.

15
What's this loanword phenomenon called?
9
Definition(s) of phoneme
4
What do you call an activity accomplished by other activities
1
What is the meaning of zero intension?
9
Is "sentence" a useful and/or clearly-defined term in linguistics
2
Are British and American English two different dialects?
3
What is the difference between a discourse and a register?
3
Definitions of extra-linguistic, internal and external change?
5
Is generative grammar a theory or an approach?