I'm looking for nice examples of the influence of natural or political boundaries to dialect divergence for introductory purposes. Generally through some limitations on the ability of people to interact. I know there are many out there, but it would be nice if it was one that has been well described and illustratable with an image. Maybe Swiss dialect diversity or Rhineland vowel shift pockets?

I understand that Korean is the prime example of this. South Korean is more open to loanwords, particularly from English, while North Korean was subject to changes stemming from the Juche ideology.

In the 1920s, the Japanese linguist Hattori Shirō wanted to investigate local dialects. At the time, the two most notorious dialectal areas in the region were Tokyo-style or "Eastern", and Kyoto-style or "Western" Japanese. The two areas differ in vocabulary: For example, the copula "to be" in Tokyo is da, while Kyoto prefers ya. They differ in grammar: for example, to conjugate the verb taberu, "to eat", into the negative, "not eat", Tokyo goes tabe-nai while Kyoto uses tabe-hen. And they differ in pitch accent patterns; in Tokyo HAshi means "chopsticks" and haSHI means "bridge", while in Kyoto it's the other way around. But Hattori wanted to map out precise borders, so he took the train, and stopped at every stop to talk to people and listen.

Turns out that exactly up to the east margin of the Ibi river in Mie one finds Tokyo-style pitch. Cross the river and people on the other side clearly talk in Kyoto pitch. 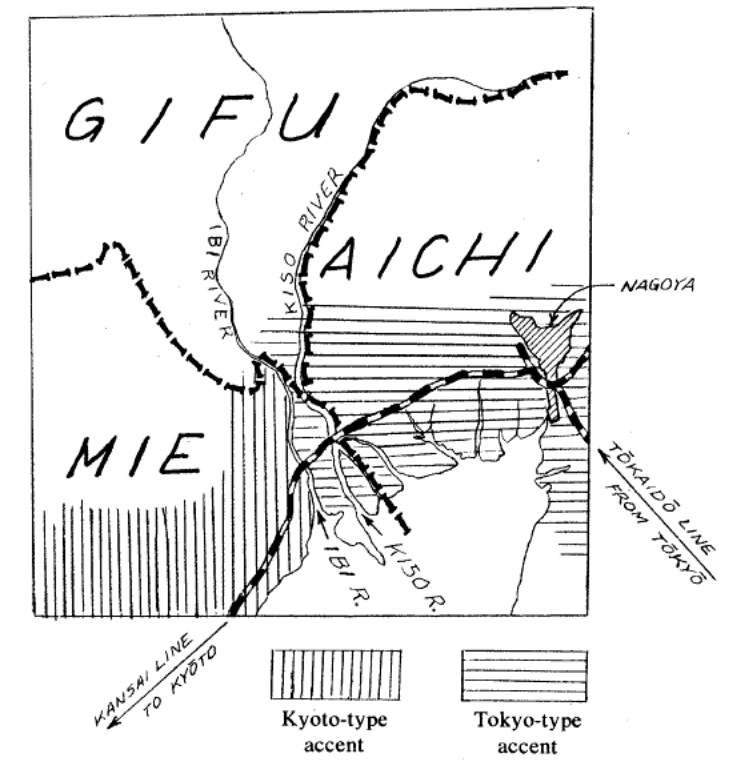 This was surprising to everyone because people to the east of Ibi (in Gifu and Aichi) used Kyoto-style grammar and vocab; before Hattori's research, people thought they spoke "Western (Kyoto-style) Japanese". To put it another way, if you come from Tokyo you'll find a mixed "buffer zone" east of Ibi where the pitch is still Eastern (Tokyo) style, but word choice and inflections are already Western-style.

Hattori explained this as follows. In modern times Tokyo is the prestige, standard dialect, and it's easy to find Kyoto natives who adopt Tokyo-style words and grammar; however, they hardly ever manage to change their pitch accent. (One reason is that the "accent classes", i.e. the groups of words with the same melody, do not match between dialects; so that you can't predict how will the pitch change in the other dialect). To put it simply, pitch is more resistant to the standard. It's easy to imitate the rules of the prestige grammar, or to borrow the words of the standard lexicon; but it's hard to change the tones of every single word.

And it so happens that, for most of Japanese history, the standard dialect was Kyoto, not Tokyo (i.e. the opposite of today). The fact that the Kyoto pitch falls neatly along the Ibi river must show that it spread up to this natural/cultural barrier, and stopped. The fact that the people east of the river have a Tokyo pitch shows that they must have been originally Tokyo-style speakers; they've managed to absorb Kyoto grammar and vocab, but couldn't absorb the pitch.

These observations have inspired Robert Ramsey's bold theory of the history of Japanese pitch, which in turn has proved to be quite productive. (The picture above, a translation from Hattori's, is from the linked article.)

Some examples for the German language (with links to maps!):

The word Jause is an Austriacism and is rarely found outside the Austrian borders.

The word Broiler still reflects the boundary between Eastern and Western Germany; note also the word Poulet being restricted to Switzerland, Alsace, Lorraine and Luxembourg on the same map.

Also the word Topfen is becoming more and more an Austriacism, loosing ground in Bavaria to Quark.

Not the answer you're looking for? Browse other questions tagged language-change list-of-languages sociolinguistics dialects or ask your own question.

4
Are there any languages where numbers have cases?
29
Is there a language where there are personal pronouns for the first or second person that have gender?