There are alternative glyphs for Devanagari numerals ५ (5), ८ (8) and ९ (9)[1], that look like cursive "y", ८ with upper horizontal bar, and mirrored "3", respectively.[2] These are sometimes called Hindi[3] or Calcutta[4] forms, while the "default"[1] ones called Bombay forms; sometimes all the variants use the same glyph for "9", and the "mirrored 3" form is considered Nepali.[4] 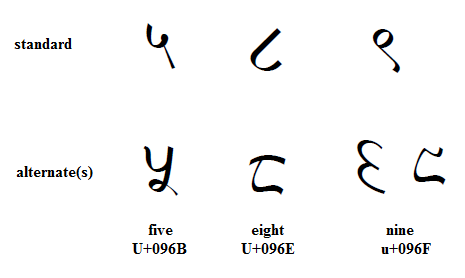 The alternative glyphs are not resolved into different Unicode characters. So can they be considered an analogy to "a" or "g" typographic variants? Or are some variants used and understood more preferably or exclusively in some (which) regions or contexts? Is there any good "open access" source explaining this phenomenon?

They are regional variants:

I have a feeling that these are regional. I've only ever used and read the standard "Bombay" forms (I'm actually from Delhi though).

Not the answer you're looking for? Browse other questions tagged numerals graphemics devanagari or ask your own question.

2
Spelling Correction on Romanized Devanagari texts
2
Mapping between Uchen, Devanagari and Lantsa help
0
Are Devanagari letters R and S related?
1
What is the frequency of Devanagari signs in Sanskrit?
0
Transcription of Devanagari script
0
IAST transliteration of ड़ and ढ़ of Devanagari