I just try syntax trees and realize that I have a few problems. I have a problem especially with two examples because I am very unsure how to handle the cases. In case 1, I do not know how to deal with fixed terms such as "the church of England". And in case 2, I don't know how to deal with "the girl who left us" These are my solutions. Would someone kindly make me more understandable? I would be very grateful! 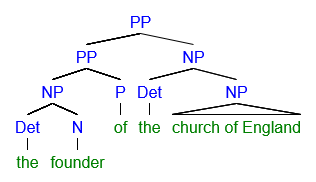 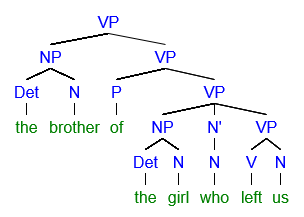 Although what is "correct" always depends on theory, there are various things that are definitely not quite right with your trees.

the founder of the church of England

The whole thing taken together is an NP (it starts with a definite article and can serve as the subject of a sentence, so it is something nominal, not prepositional), so the root of the tree should be labelled NP rather than PP.

In general, an XP must always have an X as its head.
Thus, when there is an NP, there must be an N as the head, and for a PP, there is a P head. This principle is not always follwed in your trees.

The same goes for NPs. Now I don't know what theory you are using, because there are basically two opposing approaches:

1) Make the whole thing an NP, i.e. a phrase with an N head to which the determiner is a specifier:

The head of the NP is the N "church". The DP consisting of the D "the" is a specifier because it is the sister of N' and daughter of NP.

2) Make the whole thing a DP, i.e. a phrase with a D head to which the noun phrase is a complement:

The head of the DP is the D "the". The complement of this D head is an NP which consists of the single N head "church".

I will not go into a discussion of the motivations of each approach (and neither into a discussion about whether you should leave redundant bar levels away), but you need to decide what your phrase and its head is supposed to be. Having an NP branching into a D and an N violates the X-bar scheme because a phrase must have an identifiable head and can not branch into two lexical items (D and N); one of them must be an X' or an XP. Either you make it an NP with an N head and the DP as a specifier, or you make it a DP with a D head and the NP as a complement.
Assuming that you want to have the whole as an NP, I'll continue with the first approach.

So a first rudimentary picture of your tree looks like this: 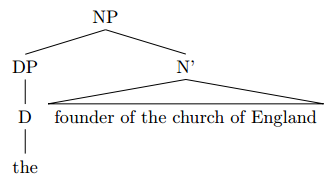 Now about the PP. As said above, the head of the PP must be a P of which the complement is an NP, thus: 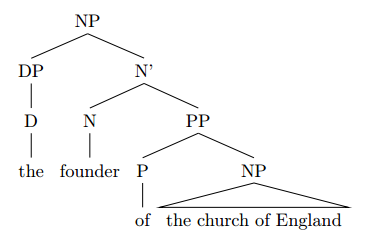 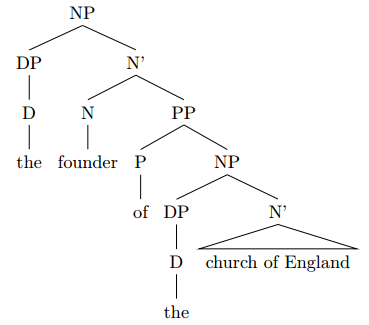 Within this N', "church" is the head and "of England" is a PP complement to the N head "church": 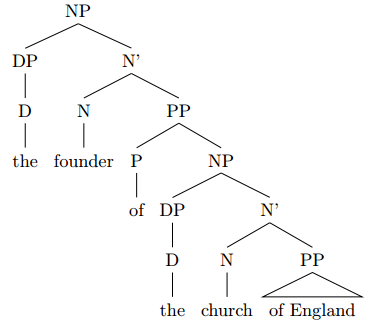 Again, you could also argue about making the PP "of England" an adjunction, but here too I find a complement more plausible.

The PP "of England" itself looks similar as the other PPs, with the difference that the NP "England" doesn't have a DP specifier: 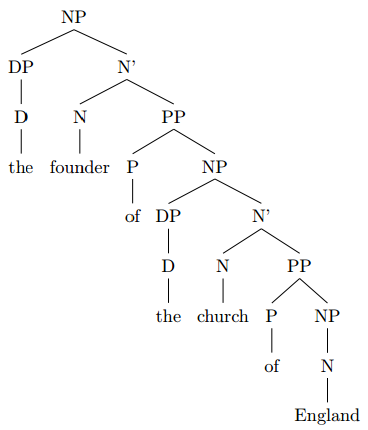 the brother of the girl who left us

Similarly as above, you have an NP in which the N' consists of the N head "brother" and a PP complement "of the girl who left us": 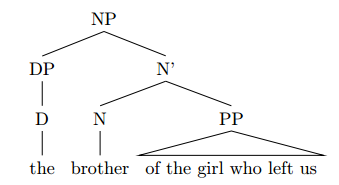 Within the PP, the complement NP "the girl" is modified by adjunction of the relative clause "who left us": 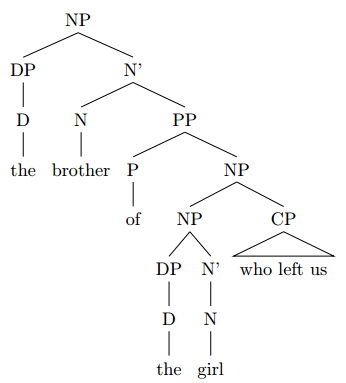 It is also possible to locate the relative clause as an adjunct to the N' "girl" rather than the whole NP "the girl": 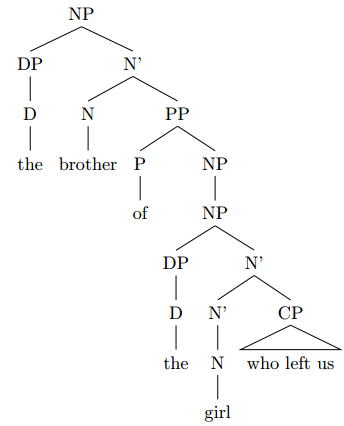 For reasons that are too complicated to discuss here, I will assume adjunction to the NP rather than N'. 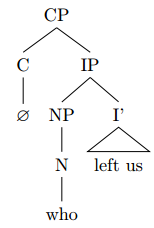 This NP pronoun is then moved to the specifier of CP (SpecC) to get into the position of a relative pronoun: 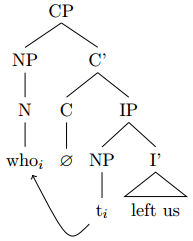 The moved pronoun leaves a trace (t_i) and is now located in SpecC position, where it serves as a relataive pronoun referring to "girl".

The tree as a whole thus looks as follows: 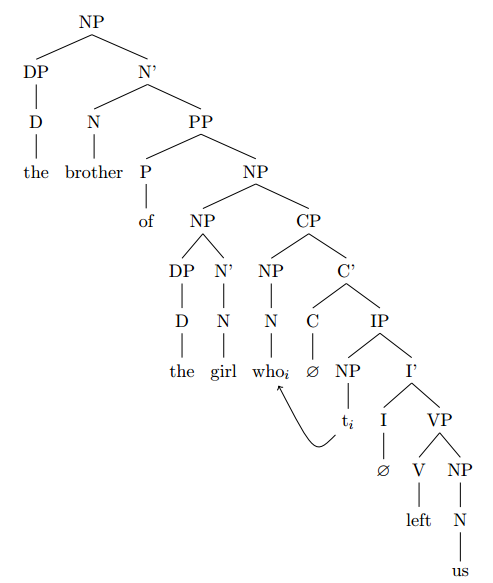 To summarize, the whole expression is an NP, where the head N "brother" has a PP complement "of the girl who ...", and within that PP complement, the NP "the girl" is modified by adjunction of a relative clause CP in which the NP "who" was moved from SpecI to SpecC to serve as a relative pronoun referring to "the girl".

The two sentences are Nps 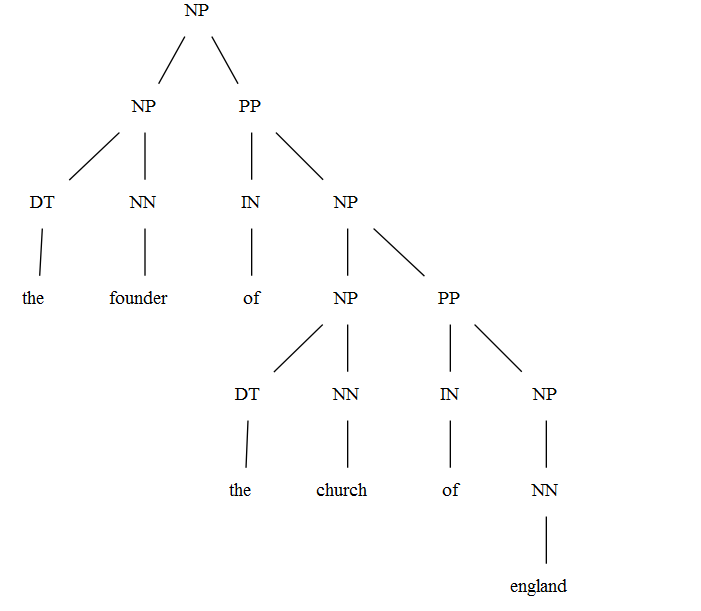 it cant be a PP because it clearly starts with an NP and "Of" cannot be separated from "The church" because both of them construct a PP (even in the meaning 'of' will be meaningless,and you will ask: of what?)

lemontree has given an excellent answer. I agree with her that you should take another look at the basics, and I think you'd benefit from a quick review of two major concepts: constituency and heads. I'll give a quick summary of two concepts - please consider this a supplement to lemon's answer. :)

Describing constituency is the main purpose of syntax trees. The subset of a tree which is dominated by a single node - such as 'of the Church of England', which is a PP in the final version of Tree #1 in lemon's answer - is known as a constituent because it acts as a unit in syntax. We can look for evidence for constituency in various ways, for example:

Topicalisation: [Of the Church of England] he is the founder; of the church of France he is not.

Cleft: It is [of the Church of England] that he is the founder.

Pro-form substitution: I'm talking about the Church of England itself, not the founder [thereof].

Conjunction (warning: less reliable test, must always be used with other tests): He is the founder [of the Church of England] and [of KFC].

Whenever you introduce a node in a syntax tree, you should ensure that the material it dominates form a constituent. In your tree, it's not at all clear that 'the founder of' is a constituent.

Topicalisation: *[The founder of] he is the Church of England.

Cleft: *It is [the founder of] that he is the Church of England.

Pro-form substitution: *I'm talking about the head of the Church, not [some pro-form] the Church.

Conjunction: He is [the founder of] and [the head of] the Church. (See, I told you the conjunction test is less reliable :P)

That's why 'the founder of' is not a constituent.

The other major concept that needs review is the head. The head of a phrase doesn't have a precise, necessary-and-sufficient-conditions definition, but it does have a bundle of common properties that sometimes, though not always, coincide. In general, the head is the only element that always appears the kind of phrase it heads (except in really special cases like ellipsis), it gets to 'choose' (subcategorise for) its dependents other than adjuncts, and it governs its dependents.

As you can see, identifying the head isn't always straightforward, and that's why linguists disagree on whether NP dominates DP or DP dominates NP, or whether complement clauses are CPs or Ss, or whether sentences are IPs or TPs or Ss or something else. Zwicky (1985) lists five different 'head-like notions':

In any event, though linguists frequently disagree on which constituent in a phrase is the head, one thing is clear: In an endocentric constituent, it is always the head that determines the syntactic category of the phrase it heads, and thus a P cannot head a VP. (Note, however, that not all theories require all phrases to be endocentric.) 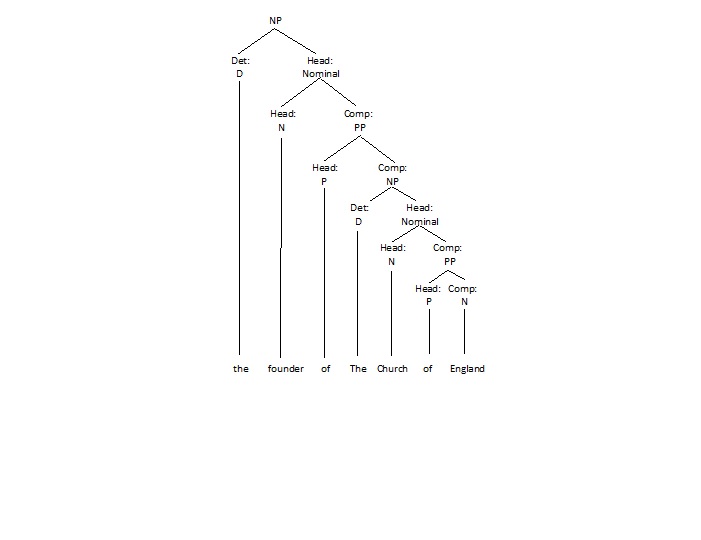 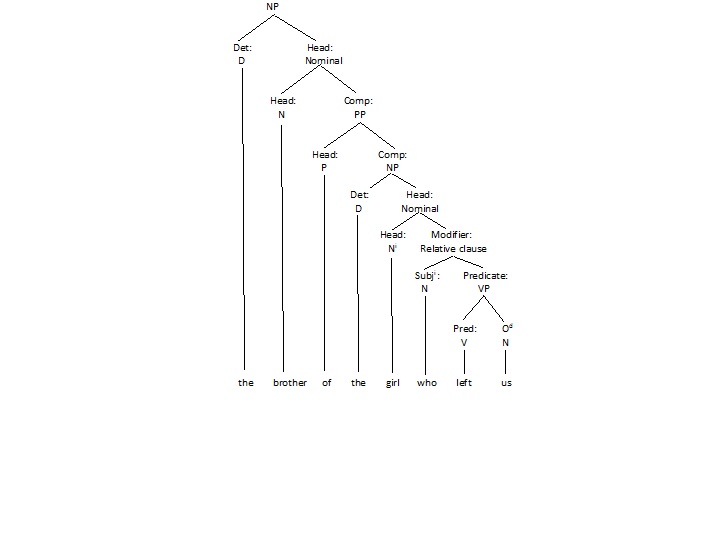