Is there a distinctive feature that separates alveolo-palatals from palatals?

The IPA doesn't have alveolo-palatal as a separate place of articulation; /ɕ/ and /ʑ/ are listed under “other symbols”. Jason Riggle's phonological features chart likewise lists them simply under “more sounds”, with no features given.

Olga Arnaudova has palatals as -coronal, contra Riggle, and has palato-alveolars as +coronal, but doesn't address the coronality of alveolo-palatals.

Daniel Recasens argues from palatographic data that the IPA should recognize alveolo-palatal as a separate place of articulation, but doesn't present any featural analysis; and in fact in Recasens' scheme /ç/ is used for both alveolopalatal and palatal (since no language appears to distinguish these); /ɕ/, says Recasens, “is realized more often with a postalveolar articulation than with an alveolopalatal one.”

If palatal vs. alveolo-palatal is not a contrast in any language, does that mean there's no point in trying to find a feature that distinguishes the two? Is the choice of /ç/ or /ɕ/ to represent the phoneme in a given language simply a matter of use and practice (or of most common realization)?

I think the most important question to address is in the last paragraph: "If palatal vs. alveolo-palatal is not a contrast in any language, does that mean there's no point in trying to find a feature that distinguishes the two?" More generally, what is the point of features? Because there is no agreement in the answer to that question, then you will get very many different answers the the issue of interest to you. The second most important question, which also doesn't have a particularly good answer, is what does the distinction ɕ, ç even refer to? IPA does officially recognise those two symbols. But there is no official or defining set of recordings adopted by the IPA as setting the standards for these sounds. Thus it falls to the late Peter Ladefoged, who was arguably in the best position to speak to what an IPA symbol "meant".

On p. 150 of The sounds of the world's languages, ɕ is discussed in connection with some speakers of Standard Chinese: the alveolo-palatal is referred to him as "palatalized post-alveolar" (which is parenthetically equated with alveolo-palatal). In other words, it is equivalent to ʃʲ. Then you just have to settle on a theory of how to say (in features) "palatalized post-alveolar". There was a standard set of features promulgated in Sound Pattern of English, where ʃʲ = ɕ is [+coronal,-anterior,-back,+high] and [+high] is the essential feature distinguishing ʃ from ʃʲ. The palatal fricative ç, on the other hand, is [-coronal,-anterior,-back,+high]. Subsequently, many competing theories of features entered the marked, so really there is little hope for answering the question if you are looking for a consensus.

In substance-free theories of features, there is in principle no way to answer the question except by reference to how the sounds are distinguished in a language. As far as we know, there is never any contrast, so little hope of answering the question. Still, there might be tiny bits of hope out there, based on phonological classes. Sanskrit has palatal consonants conventionally transcribed as <c j ś> where the latter (श) is IPA (also Whitney's grammar) ç. There are no "alveolo-palatal stops" in IPA, so we know that <c, j> "have to" be treated as true palatals, i.e. [-coronal,-back,+hi]. But phonologically speaking, <ś, श> has the same place of articulation as <c,j> with respect to consonant sandhi rules. Thus we can identify the features of this particular instance of ç based on behavior. Often, there is no such argument, for instance (dialects of) Norwegian has <kj> which is pronounced [ç,ɕ], but for which there is no behavioral evidence telling you what is acts like. The substance-free analysis in this case is that there is no feature in Norwegian which say anything more specific (assuming a dialect with a 3-way contrast [ʃ ʂ ç] as opposed to the 1-fricative varieties).

It may seem odd in a book about English phonology, but there is some detail in SPE about the description of various slavic palatalizations using phonetic features. But of course Halle was a slavicist. Some slavic dialect is said to have palato-alveolar non-affricate stops, but I don't recall which. That might be a place to look for a phonemic distinction between palato-alveolar (+coronal) and palatal (-coronal).

palatal vs. alveolo-palatal is not a contrast in any language.

Retroflex palatal (and retroflex non-palatal) are [supposedly] present in Polish in addition/contrast with alveolo-palatal. Typical examples would be:

According to Wikipedia Mandarin also has the same contrast, i.e. alveolo-palatal vs retroflex being both present (in different words) e.g. xiǎo vs Shànghǎi.

I won't try to get too much into theory here, but according to the simple graphics provided in relation to the Polish examples, the difference (retroflex vs alveolo-palatal) is where the tip of the tongue lies. More difficult to hear is the distinction between palatized vs non-palatized retroflex (supposedly dependent on the position of the middle of the tongue.) 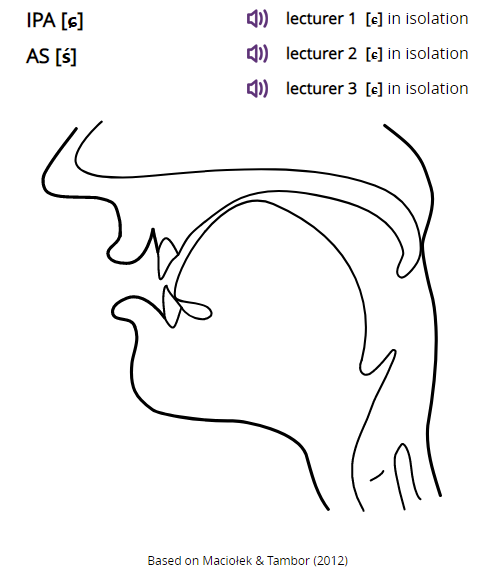 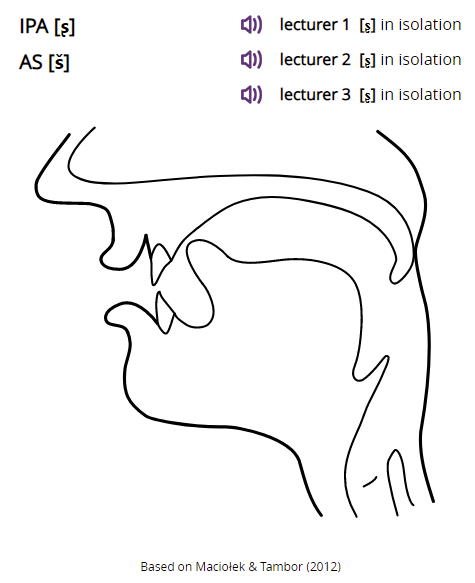 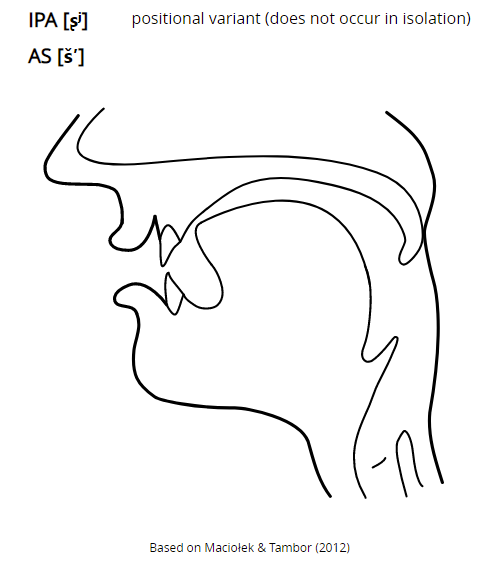 I suppose a more difficult question would be if the "middle way" sh from English (palato-alveolar ʃ) is present in a language that also has one of these extremes (retroflex ʂ or alveolo-palatal ɕ) as ʃ is less distinct from either. According to Wikipedia such languages actually exist (at least when it comes to affricates--meaning t͡ɕ etc.):

A few languages distinguish three different postalveolar sibilant tongue shapes (/ʂ/ /ʃ/ /ɕ/) such as the Sino-Tibetan Northern Qiang and Southern Qiang, which make such a distinction among affricates (but only a two-way distinction among fricatives) and the Northwest Caucasian languages Ubykh (now extinct) and Abkhaz. More common are languages such as Mandarin Chinese and Polish, which distinguish two postalveolar sibilants, typically /ʂ/ /ɕ/ since they are maximally distinct.

I suppose an interesting challenge would be for people to distinguish the Polish word być [bɨt͡ɕ] from the English word bitch /bɪtʃ/... when merely heard outside a phrase/context... (See previous link for pronunciation samples of the Polish word.) Or another challenge would be to distinguish between the first/leading "sh" in the first syllable of the Polish word szisza [ʂʲiʂa] from the English "she" (/ʃiː/ or /ʃɪ/) in terms of consonants alone (the length of the vowel is a bit of a giveaway). Apparently I'm not the only to this of examples like these, there's even a question here about some similar ones.

Not the answer you're looking for? Browse other questions tagged phonology ipa or ask your own question.

4
Is there an agreed-upon feature set that defines segments as vowels?
3
Are there any sources that provide accurate IPA transcriptions for Danish?
3
Paper request: study that correlates distinctive features with neuronal activation
4
Is there a featural equivalent of the International Phonetic Alphabet?
2
In what respect are feature matrices distinct from segments?
5
How do people deal with loanwords with highly alien phonemes?
10
Do voiceless approximants exist? What is the consensus among phoneticians/phonologists?
1
Is there any word in other languages that begins with the urdu alphabet ṛē (ڑ‎)?