What is a small language w.r.t. the number of speakers?

What would you call a "small" or "medium" language in regards to the number of speakers? I suppose a "big" language would be Mandarin, English, Spanish, Arabic. Small would be Greenlandic or Faroese. Would there be any convention on what a medium-sized language is? For instance, would you refer to Norwegian as a "small" language?

If you compare it with all the languages spoken worldwide, Norwegian is a fairly large language: 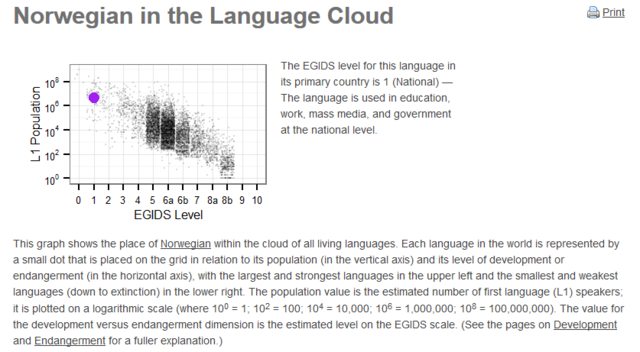 A small language would be something with <= 1000 speakers maybe, i.e. in the graph something below 10^3 on the y-axis, for example Pwapwâ, counting no more than 40 speakers according to Ethnologue: 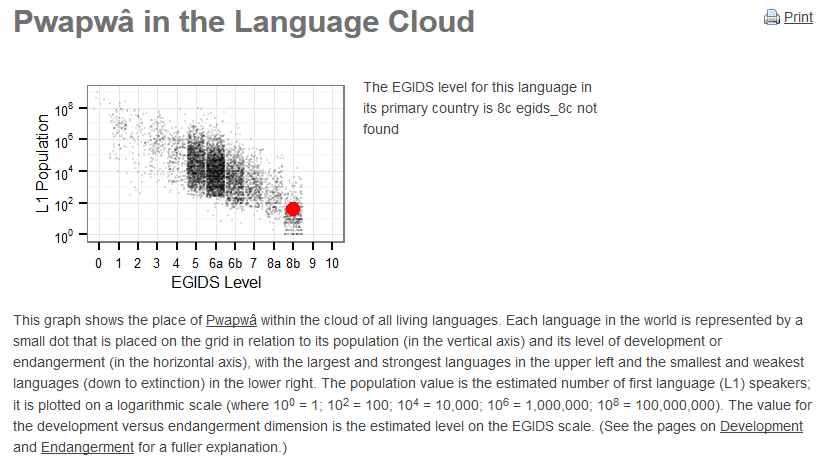 Compared to that, Norwegian, being a national language with 4,741,780 speakers according to Ethnologue, is huge.

Totally depends on context, though. Of course, compared to English, Mandarin or Spanish, something like Norwegian might seem small. On the other hand, when talking about severely endangered languages which are only spoken by a handful of people, i.e. less than 100 or so, a language with several 1000 speakers would be not be considered very small.

This also shows when looking at the distribution in a table:

Of course, Greenlandic or Faroese seems tiny compred to something like English or Mandarin with several hundred Million speakers, but these 0.1% (!) can not be taken as a reference of measurement. The vast majority of the world's ~7000 languages counts significantly less speakers, as the above table shows, and relative values like "small" and "large" should be normalized by the total distribution of speakers across languages rather than exceptionally extreme values like Spanish or Standard Arabic.
As a rule of thumb, if even a non-linguist knows about a language's existence (like Norwegian, Greenlandic or Faroese), it's probably relatively large ;)

Not the answer you're looking for? Browse other questions tagged cross-linguistic language-families or ask your own question.

9
Etymology of basic numerals (number words)
2
Given two languages, one older than the other, what are the criteria to decide if the older one is an ancestor or an older variety of the other?
2
How many languages are there which use the Arabic Script, besides Arabic?
0
How to remove an accent from a language (and what an accent actually is)
4
Does an affinity between languages necessitate that the speakers be ethnically related?
0
Is there any notion of a single “standard” dialect in various languages?