All all genetically Eastern Algonquian languages in the east?

Below is the distribution of the Algonquian Language Family from Wikipedia: 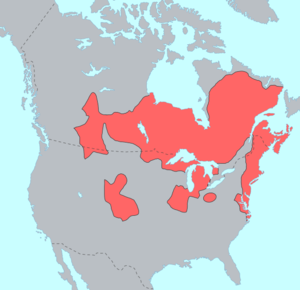 They report this language family has 3 branches, but only one is "genetic" (actually related in structure, not just in geography): Eastern Algonquian. However, this is their map of Eastern's distribution: 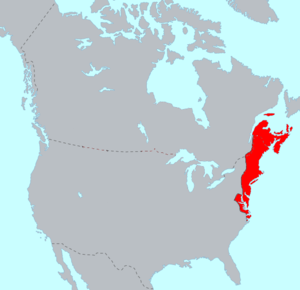 This sure looks like the exact same map, with everything on the west side (beyond the Iroquoian area) wiped clean.

I'm curious, because a distribution with a glaring hole in the middle like that usually indicates that it used to be continuous, and the unrelated languages in the middle came to the area later. However, a lot of times when that happens, it leaves languages on both sides of the hole that are related to each other, and that doesn't look like it happened here. An alternative explanation might be that the Eastern tribes all derived from a single tribe that hopped the mouth of the St. Lawrence, and found lots of land on the coastal areas of the other side that the Iroquois couldn't use as well as they could.

Browse other questions tagged historical-linguistics history language-families or ask your own question.

20
Why is it that Latin was more "successful" in the western part of the Empire than in the eastern part?
3
Is there a phylogenetic tree for all known languages?
2
Given two languages, one older than the other, what are the criteria to decide if the older one is an ancestor or an older variety of the other?
6
Are Semitic and Indo-European languages at all related?
7
Is there any superstrate influence of Old East Norse left in East Slavic languages?
4
What language was spoken in East Asia before Proto-Turkic?
1
Are there any existing attested records or any manuscripts from Eastern Hungarian languages?
3
Is most of the world's languages being in a small number of families a recent development? Or has there always been cycles of linguistic expansion?