Do we say that in

the is tall is a constituent?

Well, the standard answer is clearly Yes (see below). My questions are:

In a previous version of this post, I also asked:

'I assume that the following is an equivalent question: is is tall a verb phrase (VP)? (Am I right to assume that?).'

I have since learned enough about all this at least to be sure that this is indeed so: a VP simply is, by definition, a constituent whose head is a verb.

Literature does treat copula be + complement as a VP

I understand that there are many kinds of theories of grammar out there. I am interested in the type of grammar exemplified by e.g. CGEL. I would be tempted to describe this as 'mainstream "standard" phrase-structure grammar', but please keep in mind that I am not a linguist, and this descriptor is almost certainly inadequate.

It is clear that CGEL would say that is tall is a constituent. On p. 50, they say that in he is ill, the is ill is a VP: 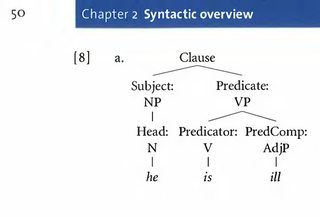 As far as primary literature, I'm sure that there must be legion examples in which it is clear that the copula be is considered part of a VP . So far, I have been able to locate one such example: this source. The context is how theta roles get assigned in sentences such as

An important suggestion, going back to Marantz (1984), says that it is the entire VP (the verb and its internal argument) that assigns the verb’s external θ-role, and not only the verb. ... Furthermore, it is also a common assumption that the internal argument is responsible for selecting the subject, that is, the postcopular element decides what can be able to be a subject. Hence the subject gets its role from the internal argument: [some examples are given] We see that the complement seems to restrict the external argument alone, not being affected by the presence of the copula. That is, the entire VP selects the subject, but since the copula is empty, it does not contribute in any sense. [emphasis mine]

For my present purposes, the point is that the paper implies that the copula + its complement is a VP.

Showing constituency of some other kinds of word sequences containing verbs

We suspect that gave John a book is a constituent. To show this, we note that the following sentence is acceptable:

If in [1] instead of is we had seems, the same test would show that seems a good player is a constituent:

But if we have is, this approach fails. As is well-known, copula be does not take do support, and so the following is not an acceptable sentence:

In fact, I am not aware of any way one could replace is a good player (or is tall) by a pro-form, and thus I don't know how to apply the replacement test---arguably one of the cleanest kinds of constituency tests---to is a good player and is tall.

Two arguments for the constituenthood of is tall

We note that is a good player can be coordinated with something which is definitely a VP:

[6] He is a good player and hits the ball hard.

This provides at least some evidence that is a good player is a constituent, i.e. a VP.

However, my understanding is that the ability to be a coordinate is not always a reliable indication of constituenthood---see e.g. p. 21 of Carnie. One well-known case where coordinates fail to be constituents is right-node-raising (RNR, or, as CGEL prefers to call it, 'delayed right constituent coordination'). For example, in F̲r̲e̲d̲ p̲r̲e̲p̲a̲r̲e̲s̲ and S̲u̲s̲a̲n̲ ̲e̲a̲t̲s̲ the food, the underlined word sequences are coordinates but not constituents. If this was the only exception, we could say that the rule is, 'only constituents can be coordinated, except in RNR', and we know how to recognize RNR on grounds other than the fact that the coordinates are not constituents. (As Greg Lee pointed out, usually theories of RNR are formulated so that RNR is only apparently an exception. But it is still true that, for the purposes of constituenthood testing, one would need to pay special attention to RNR.) However, there are also counterexamples other than RNR; for example: David introduced [[Chris] [to Tracy]] and [[Matty] [to Ken]] (p. 368 of Dalrymple). Perhaps there is a way to identify and separately characterize this phenomenon, too. Also, as far as I know, there is no known counterexample with sequences involving verbs: in every case where the coordinates are word sequences that involve verbs and whose constituenthood status is independently known, the coordinates turn out to be constituents. Nevertheless, the coordination test does seem to require way more elaboration than e.g. the pro-form substitution test, and is therefore less clean and compelling.

Being the item extracted by RNR

We note that the following is an acceptable sentence (with big thanks to Greg Lee for coming up with it):

[7] Harriet knows that Kim, but doubts that Marcia, is tall.

This is again RNR, but the word sequence of interest, is tall, appears not as a coordinate but rather as the the shared material, the item extracted by the RNR. Sources such as McCawley's The Syntactic Phenomena of English say that such items must be constituents (see here). However, here, too, there are counterexamples: many sources (such as this one) would say that the following is an acceptable sentence (although McCawley denies this, see the link above): Smith sells, and Jones rents, luxury cars to insurance executives. Here luxury cars to insurance executives is not a constituent even though it is an item extracted by an RNR. CGEL concurs that such things can happen (note 67 on p. 1343):

We focus on cases where the delayed element is a single constituent; occasional examples are found where what follows the coordination is not a single constituent but a sequence: It had to be ascertained whether the managers had suitable people to put forward for possible appointment from persons [registered with, or applying to, t̲h̲e̲m̲ ̲f̲o̲r̲ ̲e̲m̲p̲l̲o̲y̲m̲e̲n̲t̲].

So, again, although in the known problematic cases the extracted items do not involve verbs, the difficulty makes the RNR test seem less compelling.

We have two pieces of evidence that is tall is a constituent: it can be coordinated with other VPs, and it can be extracted by RNR. For both the coordination test and the RNR extraction test, it is known that the test is fallible in some cases (although none of these known problematic cases involve verbs). Also, Carnie seems to suggest that copular constructions are tricky when it comes to constituenthood analysis (p. 260).

In TSPE, McCawley often uses RNR as a test for constituency. The raised node must be a constituent. is tall passes this test: "Harriet knows that Kim, but doubts that Marcia, is tall." So if "is tall" is a constituent, what would it be other than a VP?

I don't know what the problem is with using as a diagnostic, coordination with another VP.

Theta theory is a poor cousin of Fillmore's Case Grammar theory, where subjects of various sorts arise as complements to the verb. (If you talk about theta roles instead of deep cases or semantic roles, you don't have to put Fillmore in your bibliography -- that's the point of theta theory.) I don't see the relevance to the question of whether "is tall" is a constituent.

Not the answer you're looking for? Browse other questions tagged constituents constituency or ask your own question.