Duolingo states: “In German, conjunctions do not change with the case (i.e. they are not declinable).”1 I started to think of languages I know, and I don't remember any which would have this property.

So, are there languages where conjunctions are declinable? How does this mechanism work there?

1: English->German topic on “Conjunctions”. Seems that the page is unavailable for unregistered users.

This is unusual but possible. For example, Christa König argues that in Ik, a Kouliak language spoken in Uganda, nearly all lexical items can be case-inflected.

See examples (48)-(50) on p. 155 in Coding participant marking: Construction types in twelve African languages or have a look at König 2009 in The Oxford handbook of case: 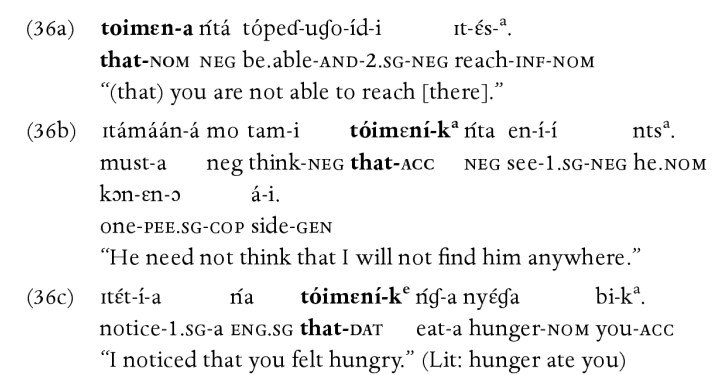 I have seen claims that some dialects of German [PDF] have conjunctions that exhibit agreement morphology, e.g. the remarkable second-person-singular subordinating conjuction daßst in:

I do not know much more about this, nor what dialects they are, except for a mention that they are Austrian.

To be sure, these conjunctions exhibit only person-marking, not case-marking.

If we stretch the definitions and classify Japanese nominalizers 'koto' (and 'no') as nominalizing conjunctions and also classify (certain) Japanese particles as case markers (although these are usually analyzed as syntactic constructs, not morphological declensions), we could argue that Japanese has declinable conjunctions:

I don't really have a linguistic background and I'm not even sure if this qualifies as true declension but there's certain compound words that act as conjunctions semantically in Arabic that seem to fulfil what you're looking for.

Let's take the word ma3-'anna (3 representing a voiced pharyngeal fricative ʕ ). It's two separate words ma3 (with) and 'anna (that) acting semantically as a conjunction with the meaning "even though" and it just so happens that 'anna is a word that acts a bit like a verb by taking on a myriad of "pronoun endings" that indicate person, number, and gender:

an example of its use can go something along the lines of:

Not the answer you're looking for? Browse other questions tagged morphology cases or ask your own question.

4
Why does it appear certain Georgian verbs take preverbs in present forms?
4
Is Conversion syntactic or morphological?
8
Is redundancy in language really impossible? (Case of the Spanish imperfect subjunctive)
0
How is the dative case for help being used here?
4
Possible connection between PIE Ablaut and Semitic vowel alternation
2
Order of cases in Indo-European languages by morphologic similarity
7
Examples of Umlaut in a living language
3
Do case endings really make sentences shorter?
8
Do languages with cases frequently have verbs which use particular cases for their objects?