What's up with the letter W?

English is an interesting and incestuous mangling of stuff. I sometimes think about W and it is a pretty interesting letter with much mystery and intrigue.

"W" developed as a standard, distinct letter by about the 17th century, taking its sweet time getting there. It is the result of standardizing a ligature of "vv", ramming the letters together. Bear in mind that the Latin alphabet did not distinguish "u" and "v" as one can see from inspecting Latin inscriptions (modern publications do, however, generously reconstruct the vowel vs. consonant values for you). The practice of using "uu/vv" to represent w in older Germanic languages such as Old English developed because of differences in the values of consonants in Latin vs. Germanic – Latin at the relevant stage (8th c or so) did not have [w], instead it had [β], so some convention was needed to represent this novel sound.

This page gives samples of written w, and you can compare that to v,u here – there is a striking range of variation in the appearance of "w" (also see this page). A design feature of Gothic script (Blackletter), which was the dominant typeface of the relevant period, emphasizes angular strokes over curves, which rules against "uu" in favor of "vv" (given that "u" and "v" are basically the same letter, historically speaking).

The differentiation of the Latin labial voicoid into "v" and "u" was basically stylistic: "v" initially, "u" otherwise, and they were not used distinctly until 1386.

Don't take spelling too seriously, it's often conventional and arbitrary. Language is primarily a spoken thing rather than a string of written letters. Don't confuse sounds (phonemes) with their written symbols. Letters and phonemes have their own separate lives. With this proviso, I can try to answer some of your questions.

how can W be a consonant? Its formation in the mouth is more like that of a vowel.

Phonetically, the vowel vs. consonant distinction is a matter of degree, not of type. Some sounds are in the middle. Then, each language decides which sounds can function as syllabic nuclei (and are, therefore, vowels) and which cannot.

In the French word oui effectively there is a consonant in the onset position, regardless the fact it is spelled as ou.

What you call "formation in the mouth" is not the first thing to see: the very similarity is in the realm of Acoustics. Indeed, [w] is almost undistinguishable from the vowel [u] on a phonospectrogram, the only difference being the duration (the vowel lasts longer).

In German, the W is more like our V, and is indeed has a consonant sound to it.

German spelling does not affect English spelling. In general, spelling is often more conservative than the spoken language. In English we still write some sounds that were pronounced around 6 centuries ago, and did completely disappear since then. In German they use W for [v], but V for [f], for similar historical reasons, mixed to arbitrary conventions.

Why are U, UU, V, W such a collective and cross-bred mess in English?

English orthography is a mess, period. But what you mention is not necessarily a mess. Can you provide examples of [w] or [u] spelled with V? Some confusion regards just the sound [w] which is spelled either W or U, on historical principle.

This is expounded in R.L. Trask, Robert McColl Millar's Why Do Languages Change? (2010 Rev. ed). 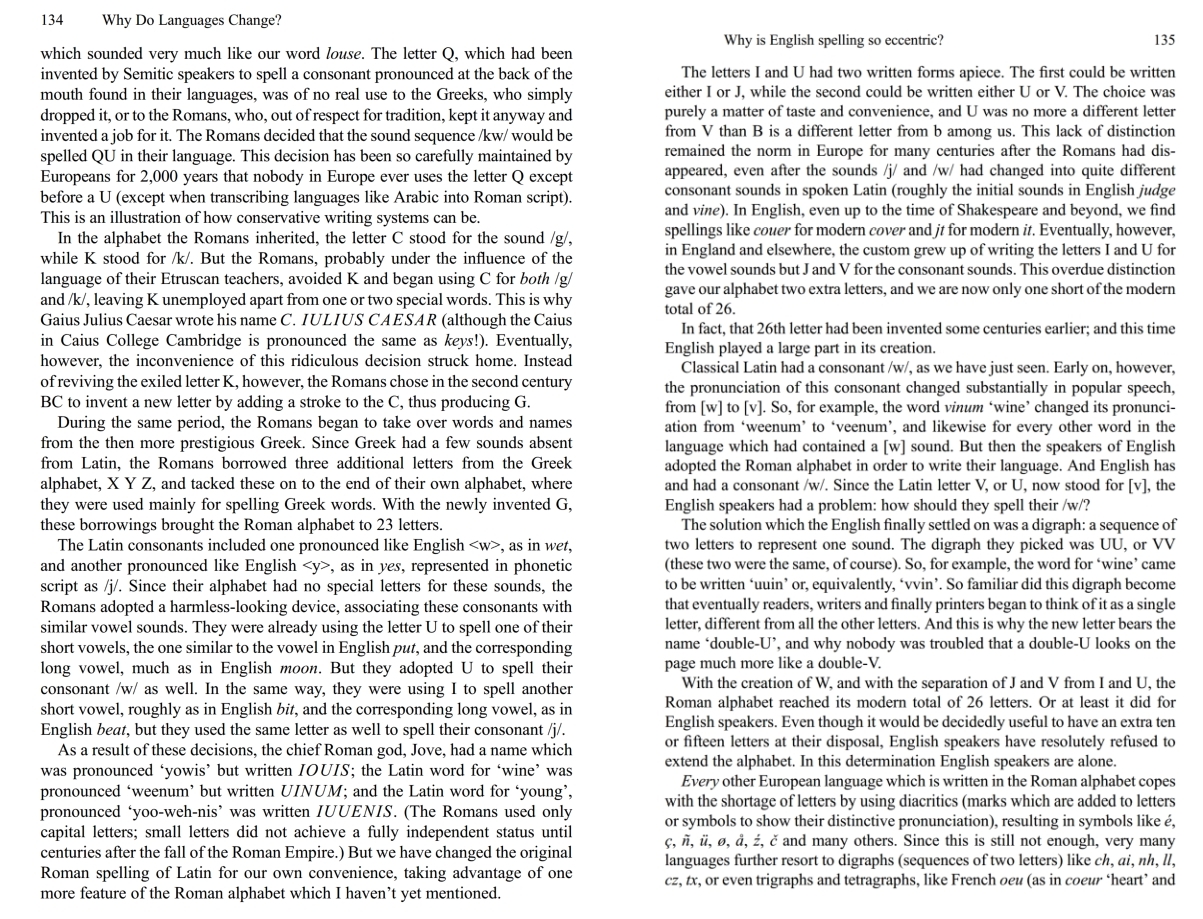 Not the answer you're looking for? Browse other questions tagged orthography vowels germanic-languages consonants semivowels or ask your own question.

5
How does the word "thunder" get the letter "d"?
14
Which languages have words containing the same letter three times in a row?
5
What are the different ways used to ortographically show the length of vowels?
4
How did the letter "v" come to represent the voiced labio dental fricative?
0
Swahili stress with two vowels in a row, how does it work?
2
Has the letter ⟨u⟩ in english ever historically represented the phonemes /y/ or /ʏ/?
12
The letter "ff" in the name “Richard ffrench”?
0
How do you translate academic runic encodings to runes (ᚠᚢᚦᚨᚱᚲ)?
3
Do all semivowels have vowel equivalents, and vice versa?