Could it be a person without a native language?

I've seen on this site, one of the users who claims that he doesn't have a native language. Could it be? If it could, then how? 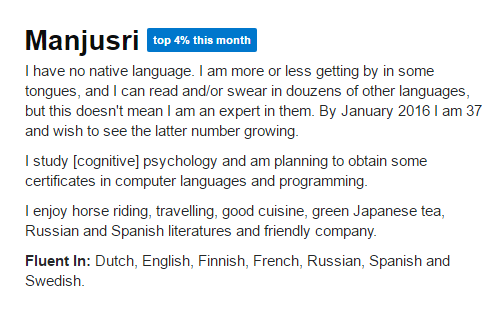 There is no non-pathological possibility of a person not having a native language, so such a rhetorical statement amounts to saying that it's hard to decide which of many languages is one's "best" language. However, there are instances of people who have no language, at some point (when they would have normally acquired a language), for instance Genie. The concept "native language" is a convenient but inaccurate and unscientific term (often used by scientists, tsk tsk) for identifying a kind of language knowledge – similar terms are "first language", "dominant language" and "mother tongue". The factors that are most relevant in identifying a speaker are degree of fluency, order of acquisition, and mode of acquisition. All of these terms identify people who are completely fluent (though not necessarily omniscient or eloquent) in a language. "First" language can be misleading if a person first acquires Japanese but then moves to an English-speaking environment at age 4 – they may well not know a word of Japanese as an adult, but technically their first language is Japanese. "Mother tongue" suffers the disadvantage that it often means the language of your mother, as opposed to the language of their father, and I've had people tell me that they don't speak their mother tongue (meaning, the language of their mother). And the problems with "dominant language" is that it assumes that only one language can be "dominant", and there's no evidence for the claim "there can only be one", plus in many cases, people who are not fluent speakers of English still have English as their now-dominant language. (I know folks who haven't used their first language for 50 years, but still have an accent).

Not the answer you're looking for? Browse other questions tagged native-language or ask your own question.