Is the V-T movement possible in English?

To clarify: V-T movement would be a type of movement of the V head (verb phrase) to I (or T) head (inflection phrase). Some languages, like French, allow for this movement. But during my syntax classes I've been told that such movement is illicit in English.

However, in a book on syntax (A. Witkos 'Movement Rules. Foundations of GB syntax of English' p. 252) I came across this sentence:

There is a student outside the classroom 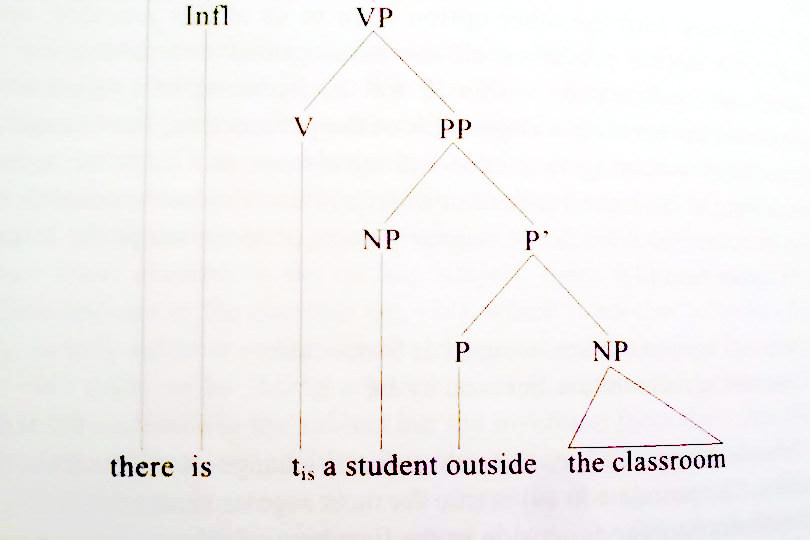 which shows an instance of such a movement. The 'is' trace sits in [head, VP] and then moves to [head, IP].

Under the standard XP-Internal Subject Hypothesis, the derivation above is correct, and is does indeed exceptionally raise from V to T in cases like this.

It is true, though, that V-T movement (and further raising of finite main verbs into higher heads like Focus and C) was available in English until well after Shakespeare's time, and that, whereas in languages like Spanish, French, Italian or German it still remains generally available, in English it has since become restricted to a) auxiliaries (i.e., modals, aspectual have and be, passive be and 'dummy' do), b) the main verb be (in all its existential, identificational, or copular uses), and, to the extent the construction survives, in the speech of old-fashioned British English speakers, mainly, c) possessive uses of the main verb have, as in You haven't money, Have you money? (instead of the much more common You don't have money, Do you have money?).

The standard explanation for why V-T Raising has remained possible for just auxiliary verbs and main verb be used to be that none of them theta-marks its complements (and none projects a subject argument, either), which would leave them free to raise from the VP in order to check their inflectional features.

That may well be right for auxiliaries, certainly, copular uses of main verb be (e.g., She is brilliant, She is an engineer, She is in London, etc. in which the subject receives its theta-role from A, P or N), and for existential uses of be like the one you mention in your question, where be selects a PP complement but it is the P outside that theta-marks a student and the classroom.

However, that 'explanation' gets much more dubious, or plainly unacceptable, for a) existential uses of be in which be is not followed by any theta-marker (as in, e.g., There is a cafeteria, unless some hidden/ellipted PP structure is assumed, of course), b) 'identificational' uses of main verb be, as in That tall man is my brother, where is must be a two-place predicate and theta-mark the two NPs/DPs, and c), to the extent the construction survives, possessive uses of the main verb have, which is also a two-place predicate and must theta-mark its two arguments, the subject as 'Possessor' and the object as`Theme', or whatever the right role-label is for the entity 'possessed'.

Thus, what used to be the standard explanation for the exceptional survival of V-T raising in the above-mentioned cases is far from satisfactory, and, to my knowledge, please correct me if I am mistaken, it has not been replaced with any other, but the facts are solid enough: finite auxiliaries, finite main verb be, and, marginally, finite main verb have can still raise to T/Infl and higher, whereas no other English verbs can.

Not the answer you're looking for? Browse other questions tagged english movement or ask your own question.

1
Head to head movement
4
On the Analysis of Tough-Movement
1
Restrictions on Wh-movement
3
X-bar theory without movement
1
What is the difference between successive-cyclic wh-movement and long-distance wh-movement?
6
V to T movement in German
2
Wh-movement Question