writing-systems alphabets
Share
Improve this question
edited May 19, 2017 at 12:23 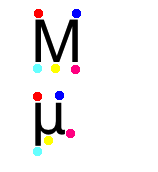 As @brass_tacks already explained, there is no historical relationship. The use of "u" instead of "µ" is an artifact of English-only character sets like ASCII. "u" is visually close enough to "µ" to be treated as a replacement. I know the usage specially from the short name of the MicroVAX II computer uVAX in the mid 1980's.

15
If the Arabic script is suited to Arabic grammar, how do speakers of non-Semitic languages cope with it?
3
Was there an evolution of the Greek alphabet in the Middle East?
1
What is the difference between "می‌گفت" and "میگفت"?
5
Density of information/semantic of Chinese and Korean language versus european languages
1
relationship between writing systems, scripts, and font. Terminology clarification required
4
Why do we make a distinction between letters and punctuation marks?
6
Is there a collective term for the Latin, Cyrillic, and Greek alphabets?