Components that comprise a syllable

Is there a standard representation that combines onset, nucleus, coda with mora? That would help me visualize the prosodic hierarchy better, because I could put something beneath the syllable level.

My intuition says that the relation between onset, nucleus, coda and morae is language-independent, but I'm not confident.

Can one of you help me shed light on this?

prosody syllables syllable-timing
Share
Improve this question
asked May 22, 2017 at 8:25

According to Draga Zec in The Cambridge Handbook of Phonology, the older model of onset, rime, nucleus, coda— 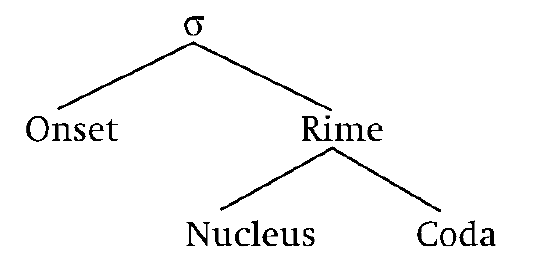 —was superseded by the mora model—

—which can account for everything the notion of 'rime' could, and more. It's mostly language-independent, but there's a distinction in that some languages have weightless C codas (as in (c) above), while in others C codas carry weight (as in (b)). For example, in Cairene Arabic both CVC and CVV attract stress, so CVC falls under structure (b), while in Khal Mongolian only CVV attracts stress, so that CVC are monomoraic as in (c).

Not the answer you're looking for? Browse other questions tagged prosody syllables syllable-timing or ask your own question.

8
Is Thai a stress- or syllable-timed language, and does it matter?
3
How can I use C's and V's to describe syllable structures in a way that rules out highly unlikely syllable structures?
2
What is the difference between a phonetic syllable and a phonological syllable?
6
Can we conclude that morpheme is ALWAYS greater than syllable?
0
How are prosodic phenomena represented in the phonological hierarchy?
3
What is the explanatory value of moras: why do we need syllable weight?
2
Source of syllable statistics of languages?
0
Are there any languages that have tones that shift over vowels in a single syllable?