So why does Modern English have /g/ at the start of the second syllable of "begin," which the OED says is from Proto-Germanic *ginnan?

I know there are words where /g/ is thought to have been established before a front vowel due to Scandinavian influence, such as get and give, but I haven't found any mention of that for begin. The OED and Etymonline say that in Old English, a more common word built on the same root was onginnan, but this still seems like it should have palatalization.

However, the OED does record some OE spellings of onginnan with the letter y instead of i (e.g. ongynnan) which according to my understanding usually represented /y/ in Old English, a vowel which was not usually preceded by a palatalized consonant.

My guess is that the /g/ is due to some kind of analogical leveling under the influence of the past-tense and past-participle forms, which have back vowels and therefore wouldn't have regularly developed a palatal consonant. Is this thought to be correct? If so, I'm curious about if we have any evidence of the date of this, and if the word is ever thought to have had /y/, or if the spellings with "y" are likely just ways of representing /i/ after a velar consonant (or mere unconditioned variants of the spelling with "i" used by scribes who had lost the phonemic distinction between /i/ and /y/). I don't see any real phonetic basis for rounding this vowel, unlike in "busy" (< PG *bisig-) where there is at least an adjecent labial vowel, but perhaps the "u" of the past participle and some past tense forms provided an analogical basis.

So far, this is a short general post about some exceptions in which palatalization of /g/ before a front vowel did not happen.

This is a well-known phenomenon and virtually all books on historical phonology of English worth reading devote a special section to this topic - see e.g. Hogg 1992, Lass and Anderson 1975 or Minkova 2014. cf. Durkin 2014: 195

See the quote below from Lass and Anderson 1975: 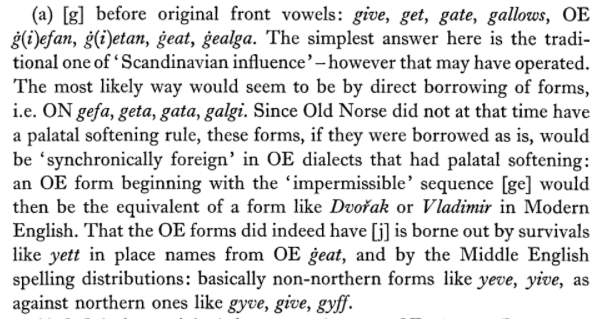 It is even discussed in slightly "less technical" literature, e.g.

Upward and Davidson 2011 write the following:

One recurring feature in words of Scandinavian origin that sets them apart from Anglo-Saxon-derived words is the retention of /g/ before a front vowel, as in get, give, begin (if these words had derived from Anglo-Saxon English, it should have resulted in Modern English forms such as * yet, * yive, * beyin)"

As for Scandinavian influence on English vocabulary, I strongly recommend reading at least Part IV. Scandinavian Influence (pp. 171-221) in Durkin 2014, Borrowed Words (Philip Durkin is the chief etymologist of the OED, by the way).

One very important thing to remember - as Durkin reminds on p. 192

"in some of these instances, it is perhaps more likely that what we have is substitution of the Scandinavian form for its similar-sounding native cognate within a particular bilingual speech community, with the Scandinavian form then gradually spreading at the expense of the native form" [emphasis mine - Alex B.].

NB! by Scandinavian Durkin means "the ancestor varieties of both West Norse (Norwegian and Icelandic) and East Norse (Danish and Swedish), but at a time earlier than our earliest substantial surviving documents for any of the Scandinavian languages, and at a time when the differences between West and East Norse were still very slight" (p. 175).

As for OE beginnan, two explanations are possible.

First, even though we can find OE beginnan, another verb was much more common – OE onginnan, until it was superseded by ME beginnen around the fourteenth century.

An interesting similar case could be the development of OE ongean (> PDE again). The ODEE (ed. Onions, 1966) says “the native forms in aȝ-, ay- did not survive beyond XVI, being superseded universally by forms in ag-, derived from Scand. and appearing first in northern and eastern texts XIII.”

More information about the chronology of this change could come from the development of OE giefan (> PDE give). The ODEE mentions that the non-patalal variant appears c.1200 and that the regular ME forms yive, yeve etc. “prevailed in southern and midland writings till XV.”

So, the remark by darkgamma that "the etymology is off and the chronology is wrong by a few hundred years" is irrelevant.

However, the biggest problem is the apparent lack of a Scandinavian (Old Norse) cognate, and I'm by no means the first linguist to notice this.

However, there is no conclusive evidence to support this, either. We have to remember that even though it is “inherently irregular,” it is a “fairly systematic process” (Hock and Joseph 2009: 152; emphasis mine - Alex B.), which means we should be able to find other examples – very few but they should be out there.

Cf. Hogg 1992 “with the degree of allomorphic variation noted in §7.41, it would be expected that there should be considerable analogical levelling and extension” (Hogg 1992/2011: 269) and later he claims that “[a]mongst strong verbs there appear not to be clear-cut examples [of analogical levelling – Alex B.] in OE” (p. 270; emphasis mine - Alex B.).

However, in our case this would contradict the directionality of Mańczak’s seventh tendency of analogy, which states that “the forms of the present more often bring about the reshaping of other tenses than vice versa” (as cited in Campbell 2013: 265).

Also, the analogical levelling hypthesis cannot explain why OE onginnan > ME aginnen was superseded by ME beginnen.

"In the end, it is up to the linguist’s judgement and his / her willingness to accept the Norse derivation of a term without a formal Norse imprint that determines whether or not it will make it to the list of medieval English words with a Norse etymon. This, of course, is a serious problem for historical linguistics, given the central place of many Norse-derived terms in the English language."

It is possible it was an analogical development. I checked Guus Kroonen's Etymological Dictionary of Proto-Germanic, and he lists Old English beginnan as a direct descendant of PGmc *(bi/du)-ginnaną, a strong verb:

He further lists the North Germanic synonym as deriving from *burjaną, which is definitely not its cognate. Furthermore, byrjȧ is attested in Old Norse, and byrja is its descendant in Icelandic, Faroese and western Norwegian, all meaning "begin". The verb begynne is a loan from Low German into the continental Scandinavian languages. Furthermore, Wiktionary lists the Old English verb as beġinnan, obviously showing a palatal /j/. I am not sure what the source of the Wiktionary entry is, but this is a possible sign that analogy had taken place — since it, as a strong verb, must have had a /g/ in the preterite.

The spelling begynnan/ongynnan is unetymological, and would probably not represent an original i-umlauted PGmc. /u/ vowel (since the verb is strong, it cannot be anything like **begunnijaną, though such a weak verb would indeed be well-formed); if anything, it would represent a rare-ish u-umlaut of an /i/, or (far more likely) a hypercorrection or scribal error.

There is nothing contradictory in that it now has /g/; it never inherited the /g/ into early Old English in the first place, but generalised it out of a paradigm that showed a /g~j/ alternation.

Not the answer you're looking for? Browse other questions tagged english historical-linguistics germanic-languages sound-change old-english or ask your own question.

25
Was there a Semitic influence on Proto-Germanic?
7
How does PIE *kʷ in **wĺ̥kʷos change to PGmc. *f in *wulfaz?
11
How did the same perfect-tense structure become so widespread in Europe?
1
Why might consonants have been thought of, as sounds only produced together with vowels?
14
Do dialects without the meet-meat merger neutralize the distinction in some contexts?
4
How many vowels and how many consonants did the Proto-Indo-European Language have?
6
West Germanic Th-Stopping
4
GVS similarity in cognate words other Germanic Languages
0
Middle English: y or ȝ