What is the x-bar tree of 'I am proud of my students'? (having trouble with proud)

I am having trouble attaching the 'proud' to the 'am'. 'Am' is a verb and 'proud' is an adjective for the noun 'I', so should come as an adjunct for 'I', but here it would have to somehow come from the verb? After that, attaching the preposition 'of' and 'my students' is fine.

Of course, proud is not an adjunct of I at all (nor 'comes from the verb' in any useful sense); your intuitions are not correct - under any theory of syntax - in those respects.

As to the answer above, which you have accepted as satisfactory, although standard in early TGG, it is not compatible either with strict X-Bar theory (since it leaves Spec AP inexplicably empty) or with current assumptions concerning 'locality', in particular with the 'XP-Internal Subject Hypothesis', which requires all arguments of a head to be projected under the head's maximal projection, or with later Merge and Economy-based theories of construction.

Since the A proud is a two-place predicate, it projects two arguments (with the Theta Roles of Experiencer/Agent and Stimulus/Theme, perhaps, respectively), and since the PP argument (Stimulus/Theme) of my students already occupies A's complement position, the second argument (= I, Experiencer/Agent) must be projected as a Specifier of A under AP and then 'raised' into the Specifier of T/Infl to satisfy its own Case requirements (recall that in Spec A I would remain Caseless) and 'check' the Tensed copula's own inflectional features (AGR-S, T, ... there have been proposed several technical implementations of this intuitive idea that I will not bother to discuss here).

Alternatively, under modern versions of 'Predication Theory' like John S. Bowers', the subject of proud of my students will either a) raise from Spec AP (according to the XP-Internal Subject Hypothesis) but land in the Specifier of a functional PredP category that acts as the complement of the copula and only then continue its ascension into Spec T, or (in violation of the XP-Internal Subject Hypothesis, but in the spirit of early Predication theories like Williams') be initially projected externally to the AP, although not directly in Spec T/Infl, but as a Specifier of Pred, and only then raise into Spec T/Infl (for the reasons already described).

Thus, depending on which version of Chomskian Theory you are working with, you will probably have to adopt one of the solutions I discuss here instead of the older and simpler one offered to you by A. Keidan, which, as far as I know, recent Chomskian syntax textbooks no longer consider adequate.

(Disclaimer: I am not a specialist in Syntax)

According to the X-bar Theory, Adjectives, as any other lexical category, undergo three different levels of projection. They can have Complements (which are sisters to the head), Specifiers (or Subjects, i.e. sisters to Adj′) and Adjuncts (sisters to AdjP). Semantically speaking, the complement of an adjective is usually a Prepositional Phrase that is necessarily required for completing the meaning of the adjective. Thus, if you say proud, you have to mention the reason of the pride, which constitutes the complement of this adjective. Syntactically, proud of my students is a constituent made of an adjectival head and a prepositional complement selected by the head: 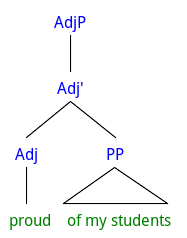 For the internal structure of the PP the usual analysis applies.

Not the answer you're looking for? Browse other questions tagged syntax syntax-trees adjectives chomsky x-bar-theory or ask your own question.

1
Having trouble drawing a tree diagram
0
Help with an ambiguous English syntax tree (studying for a final)
1
Help with constituency?
2
Where to attach 'of too much cholesterol' while drawing the syntax tree (x-bar theory)
2
Phrasal verb? Adjunct vs complement?
2
How do you coreference a possesive pronouns with an x-bar tree?
1
How can we call a word that matches a few criteria in the question?