How do you coreference a possesive pronouns with an x-bar tree?

Following Chomsky's linguistic theory (The Minimalist Program), r-expressions must be free, where free means that nothing should c-command it such that the indices have a non null intersection (if I have understood correctly).

Here is an example:

In the sentence 'His boss criticised John' where his and John are coreferenced, is John free or not? He does not c-command John, but the possesive does. So what exactly is coreferenced in this tree with John, he or (pos).

(I hope the tree is correct! If the DP His Boss was actually an NP with head boss, I think the problem would be solved?) 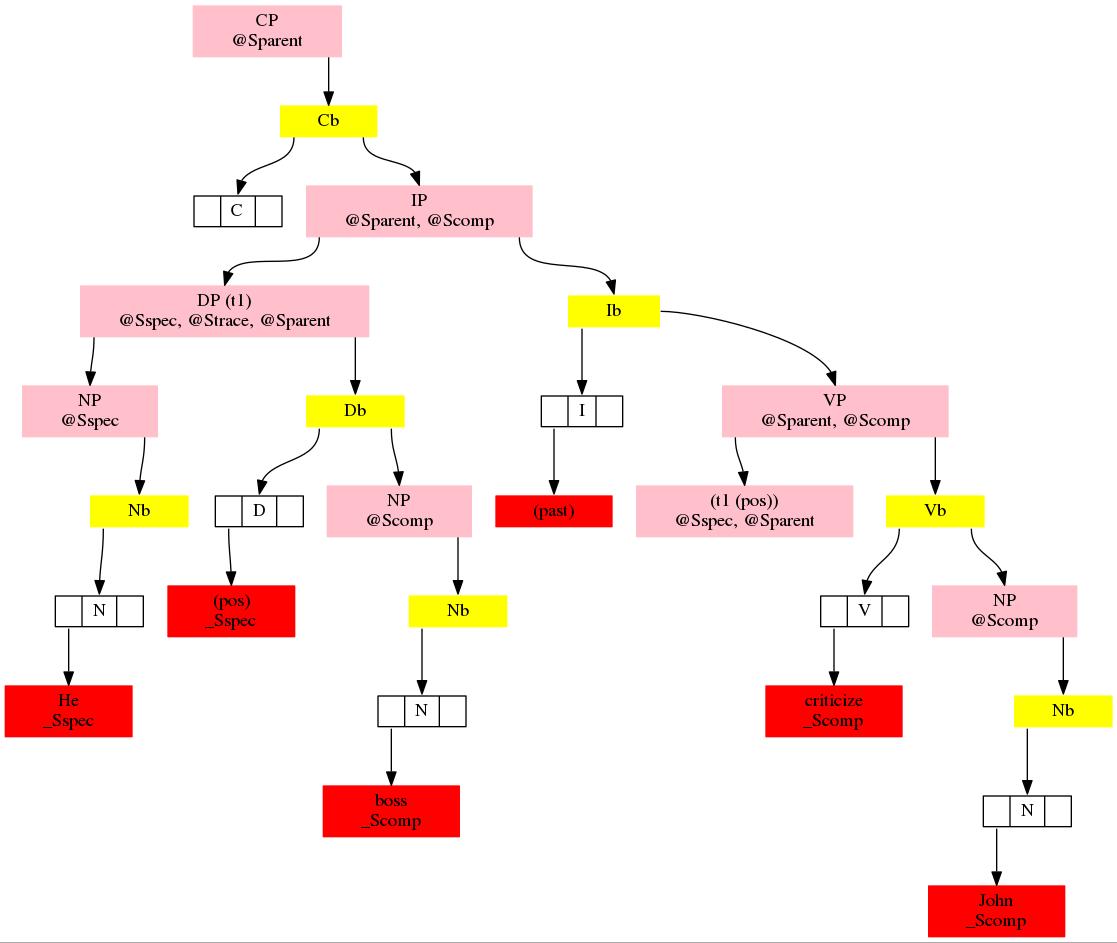 In your example, whether His boss is analysed as a DP or as an NP with the noun boss as head, the possessive his does not c-command John (you are mistaken in this respect), which, as a consequence, is 'free' and satisfies Principle C of Binding Theory, as all r-expressions must. What Principle C says is only that r-expressions must not be c-commanded (and therefore automatically 'bound') by any co-referential expression, be it in the same 'binding domain' (the clause, in this case) or in a higher one, but that does not block co-reference between his and John: as his does not c-command John, it cannot bind it either (= make John obligatorily co-referential with it). Principle C allows his and John to not be co-referential; it by no means forces then to be non-coreferential, a very different claim. In consequence, in your example the possessive his may indeed refer to the same individual as the noun John does (= John, in that case), but it need not; it may also refer to any other male individual. The only r-expression that does c-command John in your example is His boss, but His boss cannot possibly be interpreted as referring to the same individual John does; if it could, the r-expression John would automatically be 'bound', in violation of Principle C of Binding Theory, and to save the sentence it would be necessary to replace it with the matching reflexive himself, according to Principle A.

0
How to determine when an additional X-bar or XP can be used
1
Why is it that the wh-word as a subject in the spec position cannot raise over an auxiliary verb like 'did'?
1
What is the x-bar tree of 'I am proud of my students'? (having trouble with proud)
5
How do you draw a syntax tree for a sentence with a dummy subject?
0
Possessive vs non possesive WH-pronouns
3
How to treat adverbial phrases in X-bar theory